Qobuz will not play or is deadly slow to start playing

Roon Core is connected via ethernet from a netgear 8 port switch to an AT&T cable modem. AT&T fiber internet service 1000.

I just re-subscribed to Qobuz and logged into it via the Roon app. It takes forever to load the album selections, artwork is sometimes even longer. It takes a long time after I make each selection to get to finding an album I want to play. Then it will either not play at all when I Hit play now, or it takes forever and a day to load and start playing. Sometimes I get an error message that the content won’t load. When or if it does eventually start playing it will randomly stop mid-album and not start again. I don’t recall this ever being a problem in the past.

Yes. I have rebooted the cable modem, iPad, switch, MS1 and restarted Roon Server a couple of times but it is still having issues.
Running Qobuz directly from the iPad to the usb input on the M12 via the isn’t media dongle works fine.

DNS servers can be an issue with this kind of symptom…what are the network settings on the core machine? are you having the public DNS servers like 1.1.1.1 or 8.8.8.8 in your IP address DHCP service? or if fixed address add one of them.

Does the same issue occur if you play to System Output of a remote device instead of the NAD? 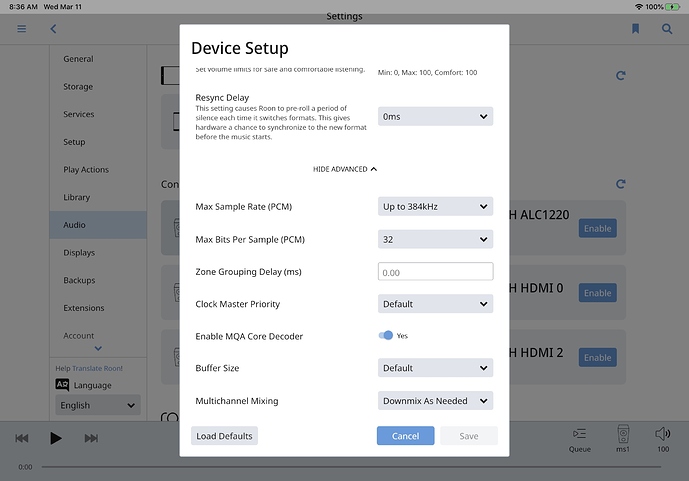 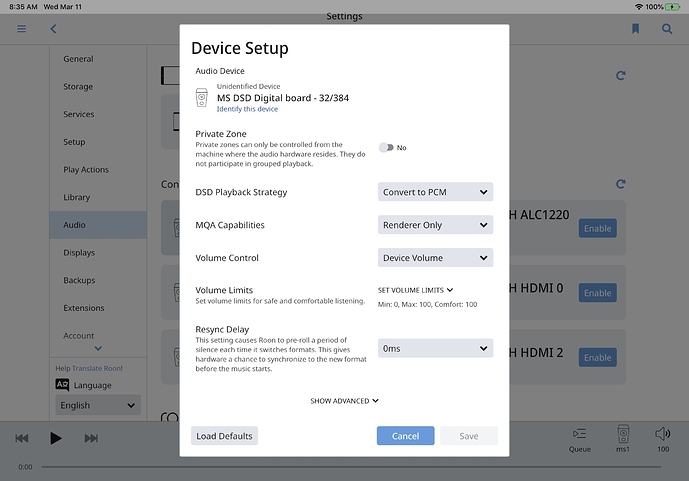 Screenshot 2020-03-11 at 8.35.49 AM2388×1668 297 KB
Once I did this I tried switching back and forth between both players. The MS1 was more responsive initially, however playback through both slows or stops when jumping between different tracks. I wondered if the bit rate of the original file may be making a difference but no, it was the same performance.
I get the occasional error message about error loading the page, and please check the network connection but I know that is working fine.
I have also tried my iPhone as the remote and this makes no difference. Tracks stored on my MS1 server HD or Live Radio play almost immediately through either player.
Andrew_Chattaway (Andrew Chattaway) March 24, 2020, 3:05am #8

I have been having exactly the same issue for the past couple of weeks. I’ve tried rebooting and restarting everything connected to my setup. I cleared the cache and restarted Roon server probably half a dozen times but no effect. Occasionally Qobuz will play but most of the time it just sits there looking like a track has loaded and nothing. I also raised a ticket in it but no solution yet.

Did you have a chance to try @wizardofoz’s suggestion above? In the past we’ve seen Google DNS and Cloudflare DNS help with streaming service performance and is definitely worth giving a shot.

I’m not sure I know how to change the DNS settings in my setup. When I look at the Roon core settings on my browser there is a regular IP address. I will read the links you sent and see what I can do.

I have been doing a bit of research online. I don’t understand everything I am reading but here is the scoop. I have ATT fiber going through an ATT BGW210 modem/router. It would seem by reading a few forums that ATT do not allow you change the DNS settings on this Unit. I did read something about using a private VPN but I don’t know how to set that up.

Since you can’t set up the alternate DNS on your router lets go with another option:

Do you have another machine that you can temporarily use as your Roon Core? If you use that machine as your Core does the same behavior occur? This will help us determine for sure whether or not it is a network issue or perhaps something on that Core specifically.

Yes, I can download Roon server to my Mac Mini and test it that way. I’ll give that a go and let you know the results.

Thanks, @Andrew_Chattaway — Looking forward to the results of this test.

Ok, so I was able to try a few different things out:

I hope we can get to the bottom of this issue. thanks.

@Andrew_Chattaway perhaps try to add the DNS settings to your MacMini in system prefs under network and advanced then select DNS. it will show the selected DNS entries that your router has assigned but when you go to add a new one it will like wipe out what is there so make a note of the current one(s) so you can add them back. add on your router first probably something like 192.168.1.1 and then 1.1.1.1 and or 8.8.8.8
apply and see how that works for you.

I appreciate the thorough testing here. Based on the results of your testing, it sounds like the network communication is most likely the issue here since this is happening with all devices on the network. To confirm, I’m hoping you might be able to try this:

Does the same issue occur here? While a mobile network is definitely not ideal, it will help show us how things behave when you’re on a different network completely.

this is what I have discovered so far:

I am also having the same issue on two different systems on two separate networks in different parts of the UK; Manchester and Leeds.

My main Manchester setup is Roon core installed on an Innous Zen mk2. Connected to a Chord Qutest via USB.

When I try and play a track streamed from Qobuz I get the loading graphic on the bottom of the remote app (on iPad Pro 2018) and eventually with get a “Qobuz is running slowly” message appear. Sometimes the track will play after about 15 or more minutes.

Have a Tidal account as well and this has no issues at all.

The Innuos is connected by CAT6 copper to a Ethernet port on the ASUS router. No VPN or anything fancy set up.

As I said previously. I have a friend who is in Leeds and experiencing exactly the same issue. He also uses Tidal as well and that has no issues.

Both setups have worked with no issues up until a couple of day’s ago.

So I’d rule out any local network issue and this this is somewhere beyond the broadband connections and could be to do with Roon/Qobuz peering?

Any ideas as to how to troubleshoot further?

Hope it gets resolved soon.

Thanks and stay safe.

You are not using a vpn setup to your company or something like that are you!

I have not been using my VPN connection to my work.