I don’t have hard numbers, but I’d guess every dozen or so radio tracks Roon plays the same song twice in a row. See screenshot of history, below.

What can I do to stop this from happening?

Probably because both of those songs are from different albums. There are at least 3 different versions of that album in Tidal. But, to your point, as far as I know, there is no way yet to affect the radio logic, except by down voting.

I believe that an update/expansion of the radio logic has been talked about by the devs; but, again, as far as I know, nothing has been firmly announced. I would guess, like playlist functionality, that the devs will put up a “Lets Discuss the Radio Feature” thread for everyone to post ideas/dreams/must-haves.

It happened again, and I picked up my phone to skip to the next track. I was a little surprised to see “part 2 of 2”. What does that mean? 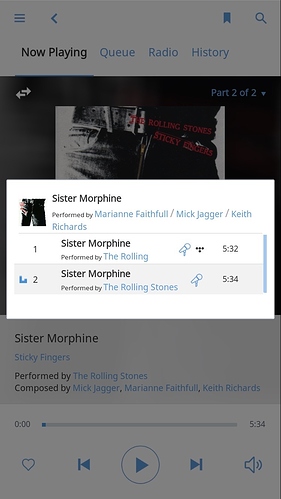 A post was split to a new topic: Radio function is playing the same content multiple times