I support all the prior requests for better internet radio in Roon. While I can already listen to the Radio Paradise aac 320 stream, Roon will not consume the RP new flac feed. RP uses a different method to deliver their flac feed. With the help of RP’s technical staff, Michael Herger developed a new RP app within LMS (Squeeze server 7.9.1) that does a great job of rendering the flac feed. The sound quality is excellent. It would be a great value for Roon to offer similar functionality. Please consider. Thanks.

I also discovered that the Radio Paradise app for my iPhone and iPad was updated to allow the FLAC feed, and since the new Apple products support FLAC I have changed to that format and enjoy great quality sound.

+1 for a possible FLAC feed solution for Radio Paradise. I would think you could set it up so you could put your email and password in Roon like we do with Tidal.

Me too. RP are talking about it but nothing yet that we can stream through Roon

If all streamers used Ogg as a container, we’d be set already.

Ogg is a free, open container format maintained by the Xiph.Org Foundation. The creators of the Ogg format state that it is unrestricted by software patents and is designed to provide for efficient streaming and manipulation of high-quality digital multimedia. Its name is derived from "ogging", jargon from the computer game Netrek. The Ogg container format can multiplex a number of independent streams for audio, video, text (such as subtitles), and metadata. In the Ogg multimedia framework, The...

Roon built In Support:
WAV
WAV64
AIFF
FLAC
ALAC
OGG
All of the above at resolutions up to 32bit 384khz.

Agreed. FLAC can be streamed directly now as well, but RP has not yet implemented that for some reason.

Per Bill, slim or no chances we’ll get a lossless direct link to use via Roon anytime soon, be he is upgrading infrastructure this weekend and he says 320Kb/s stream will improve! It’s not bad now but certainly not lossless.

Radio Paradise FLAC streaming is now supported in JRiver MC 24. Hoping Roon will include this in the near future!

Anyone else notice the pumped up bass? Sounds to me like RP is doctoring the signal.

As a RP/Roon/Devialet fan/devotee, I hope we get FLAC streaming from RP sooner than later. So if there is any way to promote this effort, I wish to add my vote to it.

As for bass enhancing, I hadn’t really noticed it. Will pay more attention to it this evening.

Here here, I second the motion to support Radio Paradise FLAC stream as well as displaying the the cd cover track etc directly through Roon Bridge and Roon Clients. Right now I am having to use LMS (On mac mini) and my old Squeezebox Classic (2007 technology) connected via S/PDIF. This is connected to my Benchmark DAC1 and Bang and Olufsen Beolab 3 powered Speakers to listen to Radio Paradise losslessly. It sounds fantastic, like really awsome. But cannot do it with Roon (sigh).

For all my other music (Tidal and local), I pipe Roon to my DAC1 through Roon Server (on same Mac mini) via USB. It sounds and works great. But the two shall not meet. We really need to do something about the Radio (Internet Radio) Roon. Several Internet Stations are Transmitting in FLAC. I listen to my Radio stations 80% of the time.

Mp3 128, is that really all you can get for the time beeing through Roon?

Radio paradise will give you AAC 330

Further development of Internet Radio is on the roadmap. Brian has noted support for OGG/FLAC as being a matter of scheduling the effort.

But Radio Paradise has an individual way of serving up FLAC (see post 31 from Bill Goldsmith of RP on this JRiver Forum thread) that imposes some requirements on the player and creates development issues.

If RP were amenable to providing a usual OGG/FLAC stream in addition to their own API (which serves up metadata and a slideshow) that would put them on the same timing for support of that format in Roon as other stations. But the issues raised by their individual approach is likely to result in delay of RP until a later development stage if the API remains the sole access to a FLAC stream from RP.

Yes read that as well, but I dont for reason I cant figure out. 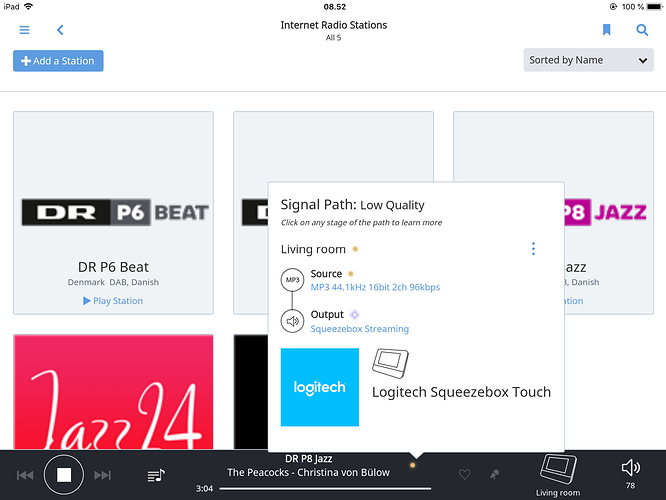 Screenshot appears to be for DR P8 Jazz rather than RP.

Wrong screenshot, but fixed now, thanks!

Internet Radio FLAC support is included in Roon 1.5. Some stations that currently work for me are listed in this thread. As set out above Radio Paradise has an unusual way of implementing FLAC support that will delay it being available in Roon.

You can not use it now with Roon, but if a hobbyist can make something like that, then I think it should be a piece of cake for the Roon software specialists.
https://marco79cgn.github.io/radio-paradise/

Any news on a date for the RP FLAC feed?