Why is roon doing rate conversion when i’m playing flac from nas library? 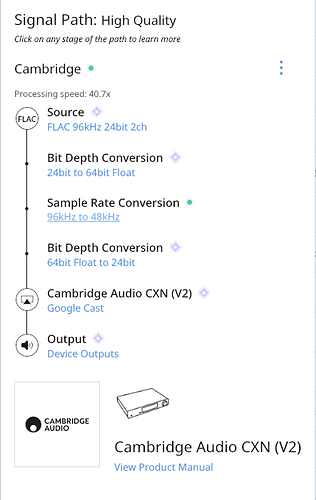 the same setup but TIDAL masters, no conversion. 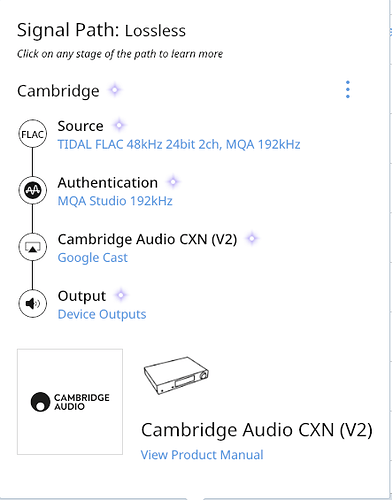 Because you are using ChromeCast which is limited to 48kHz playback (96kHz for devices that properly support it). The second screenshot only shows the successful MQA Authentication, it’s still 48kHz (see Source entry) which is supported by ChromeCast. If the CXN v2 is an MQA decoder and renderer, it will create the 192kHz audio out of the 48kHz source. See also:

Roon is down sampling by using Chromecast built in device Support

Hello @Egon, Roon only sends >48kHz audio to devices that declare the HI_RES_AUDIO_SUPPORTED flag via the Chromecast SDK. If your device doesn’t report this flag, it’s basically stating that it doesn’t handle anything over 48kHz. If your devices support >48kHz sample rates and don’t report this flag, there is a bug in their implementation of Chromecast. We are going to reach out to Cambridge Audio with this information and we will be sure to keep you in the loop. -John

The above information from @BlackJack is correct. Since you are using Google Cast to the Cambridge, you are limited to 48kHz as the max sample rate. If you wish to output past this, you will need to use USB to the Core or if you wish to keep an Ethernet connection you can purchase an Ethernet -> USB zone, such as Sonore micro/ultraRendu, Allo USBridge to facilitate the Ethernet -> USB connection on behalf of the Core.