Records split into 2 or more

Hey @keyse1 – we have a feature for fixing this called Fix Track Grouping. You can access it two ways:

If you can find all 3 albums in the Album Browser, you can right-click (or click and hold) the three covers, to select them. Then click the Edit dropdown and select “Merge Albums”

You can also start on any of the three albums details screen, click the Edit pencil (on the right), and then click Fix Track Grouping. You should be able to search for “willy and the poor boys”, then add all the tracks and group them into the album.

One thing to note is that we shouldn’t be splitting the album up this way in the first place! Generally, this will only happen when we see folders or file info (tags) that we’re not expecting. You can read some more information about how to ensure this doesn’t happen here and here.

Take a look and let me know if you have any other questions @keyse1!

How does one get Roon to merge or see these as one Track???

The issue is Track 16 of this album:

I was wondering the same thing, as I have this issue with a few albums - and also the other way round!

I think this should help, but let me know if you’re still having issues guys.

Unless I am missing something in the GROUPING it will not fix/address this issue where there are MORE tracks on the right than on the left. And the tracks on the LEFT are accurate.

I could add the tracks on the left, but then it will never MATCH up to the correct album which only has 21 tracks - and a still Unidentified Album.

Hmm. When you initially add your library, we try to group tracks into albums using the techniques discussed in the post I linked above – so, directory structure, track/disc numbering, and file tags all figure into how we form albums. If your albums are split up, but you feel the directory, tags and numbering are correct, I’d definitely like to hear about it.

If an album wasn’t grouped properly, all you need to do is get all the tracks on the right side, and save. We should attempt to re-identify the album, and you should be able to identify it manually as well if no match is found.

The left side is a way to search your entire library to add missing tracks to the album, so it will have more tracks than the left by design.

Two other points: we have a redesign in the works to make this screen more clear, so be aware this screen should be a lot easier to use in a future release.

Second of all, I’m seeing some issues right now using this screen via remote, which I’m going to look into further. I will follow up if we find a bug here.

I had an idea while out at Lunch and will see if this fixes my issues. I will report back shortly.

Okay. Since I have one track which was split into 3, I decided to DELETE the other two songs. This gave me 21 tracks and I could NOW identify the album properly. BUT, BUT, BUT. The song/track which was split still shows a SHORT time for that song/track. It is still showing the time for part 1 of that 3 part song. Re-Identify the album still does not fix it.

Positive: Roon was now able to properly identify the album, just track 16 has the wrong time on it.

It’s a workaround, but we need a proper solution

Hi Mike
A few builds ago, there was the option in Fix Track Grouping to tick a box akin to “Tracks in that Folder”…enabling the User to group all the Tracks in that specific Folder only…with the most likely outcome being that all Tracks in that folder would now be grouped…ready for another ID process by Roon

Do you plan on bringing that back, as I feel it will help sort out a lot of these “split album” issues??

A few builds ago, there was the option in Fix Track Grouping to tick a box akin to “Tracks in that Folder”…enabling the User to group all the Tracks in that specific Folder only…with the most likely outcome being that all Tracks in that folder would now be grouped…ready for another ID process by Roon

Do you plan on bringing that back, as I feel it will help sort out a lot of these “split album” issues??

Yes, it will be back.

@extracampine @dshore - I think I misunderstood. You’re talking about the Identify feature, not the Grouping feature.

If I’m understanding correctly, yes, this isn’t supported right now, and I covered it a bit here. Hopefully soon.

I have the OSX mac version of Roon. I have a mac bluetooth keyboard and trackpad not a mouse.
In Albums view, I selected two albums I wished to Merge (the top of the screen says “2 selected”).
I am unable to access the Edit / Merge function you mentioned. The Roon toolbar Edit has no merge option. I am unable to get a contextual menu using the trackpad.
Any suggestions please.

Hi @Sunrise – can you confirm what version you’re on? It’s on the About page, accessible from Settings.

It should look like this, but let me know if you’re seeing something different: 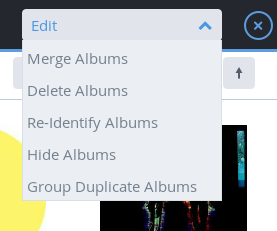 OS X 10.10.3
Roon Version 1.0 (build16) stable
I can not access a contextual menu like your screenshot
Thanks

Hey @Sunrise – very strange. What options are you seeing under the Edit dropdown? 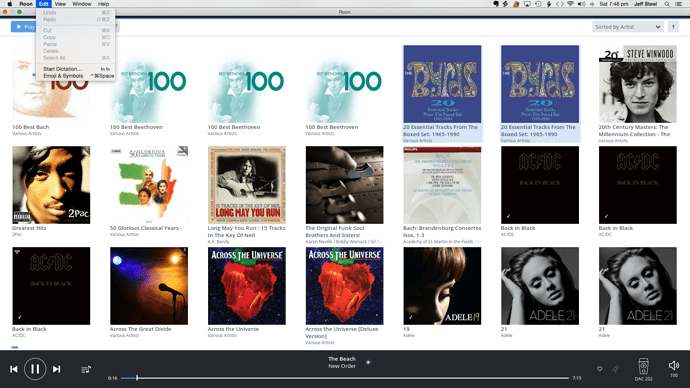 That is the OS X menu, but all interaction with Roon takes place in the Roon screen itself.

Either long-press of two-finger click with your trackpad on one of the albums you want to merge, so it is selected (it’s indicated by a light blue hue). You can now select other albums as well by simple clicking them.

When you long-press or two-finger click, a black overlay bar appears on the top of the Roon screen. Top right in this bar you’ll see a Roon-styled Edit menu, containing all options mentioned above. 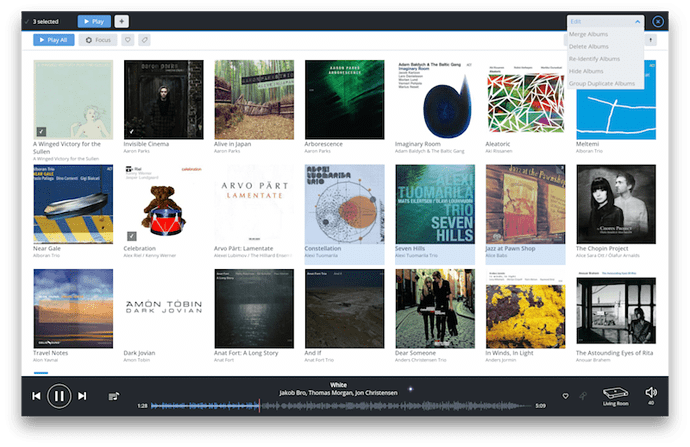 The edit menu only appears if you select albums in the full album view. If you search on them first - to identify the albums you want to merge - there’s no edit menu.