Hello @support. Something odd happened today. I had added 4 ripped CDs to my library (and they had showed up in the overview). Later we started playing music (not the new albums) and all was proceeding normally until suddenly the music stopped.

I went to a Roon Remote, and noticed that Roon was saying that it was importing thousands of new files to the library. The Roon Core (1.5 B363) runs on a fanless ROCK NUC - and this was running hot - not its usual gentle warmth. The library is held on an internal 1TB HDD in the NUC.

I shut down the NUC, and let it cool down. Then restarted ROCK and the Core. The library seems to be now back to normal with 1,689 albums and 33,077 tracks. Roon reported it was analysing the new tracks and this completed normally.

There are some odd entries in the logs, e.g.

I’ve uploaded the logs to you. Perhaps you could take a look and see if the cause of this odd behaviour is apparent. Thanks

a fanless ROCK NUC - and this was running hot

Ventilation is key. A can of air maybe …

Nope - this was not normal behaviour. I’ve been using this NUC for well over a year, and the normal temperature is slightly warm to the touch. This was hot

Thanks for the report, I will ask the QA team to review the logs since there does indeed seem to be some strange traces there.

It may be irrelevant, but one of the other albums (Seed) ended up with the first track split off into a separate album. I had to merge the two. Thanks.

The ROCK web page claims that I have still 41% free of the 924 GB storage on my 1TB internal HDD. Bizarrely, when I come to delete the second level Internal Storage folder, the deletion process finds at least 12TB of files to delete… 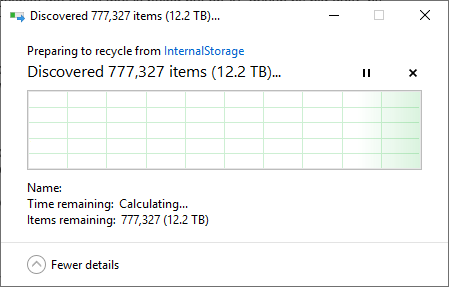 I have a feeling that it may be best to invoke the nuclear option and reformat the drive, and restore the music files from an earlier backup; but before I do that, do you guys need any information from the setup?

I would go ahead with the reinstall and restore. I have made the QA team aware of this issue and we discussed this with the dev team but there are no signs in the logs as to why this issue occurred. Please let us know how it goes after the restore and if you are able to reproduce this at a later point, reproduction steps would help a lot in narrowing down the cause.

Hi @noris I discovered today that this has happened again (recursive nesting of the Internal Storage folders). I have no idea what brought it back. I had just added the 2018 remaster of Hounds of Love, and noticed that Roon had split the album into two. That’s when I discovered the folder recursion.

I’m trying just deleting the first entry of "Internal Storage within the Internal storage folder - currently it’s found 2.10 TB of files - this is on a 1TB drive. Go figure…

Can you please provide some more information on how you added that album? Did you use drag and drop or did you add the album to one of your existing watched folders? What kind of PC were you using as the Roon Remote? Were you using the OS file explorer or do you use a specific type of app to transfer this content over? Can you please upload that album for analysis? I will PM you upload instructions shortly.

Did not use Drag and Drop (never do), and did not stop the Core while copying single albums (never do).

File uploaded to your server. Thanks.