I fully join the wishes of Steve @hifi_swlon

I’d like to add a number 4: HifiBerry DAC+/DIGI+/AMP+ as official RoonReady endpoint, please!

I’d like to add a number 4: HifiBerry DAC+/DIGI+/AMP+ as official RoonReady endpoint, please!

I think that’s down to HiFiBerry to do, and to get their images certified by Roon Labs…

Maybe the option for custom endpoint images? I can make my own lineart amp.

I think it is nice when they will create 1 location where everyone can share their working endpoint image.
No discussions, etc, just images and 1 pdf file as install guide or so.

The recent move of the “credits” to a separate tab next to the “tracks” tab with the latest release is an interesting move, and opens up the possibility of having more tabs in GUI terms.

This would be a neat way to include other relevant data. Perhaps having the “album art” under a tab there would be the way to go. For example, the “album art” tab would be greyed out if there is none, though if the users has album art (e.g. rear art, booklet, liner notes, sleeve pictures etc etc) then they could click on it to see large thumbnails of what they have - which when clicked on, would open them up.

An alternative (and possibly superior) method would be to have clickable icons appearing under the album cover (when viewing any particular album) if album art is there. For example, if the user has a rear cover image then the “back/rear” icon would appear, and when clicked it would bring up that image. There could be 4 or 5 icons which the user could assign their images to; e.g. rear/back cover, booklet/liner notes/gatefold sleeve, media image, inside rear (the inside of the rear cover in a CD tray - sometimes it is blank but often is has useful info or a picture on it) and other media. A number of image/file formats would be supported including JPG, BMP, PNG and PDF.

Can we have a pop up Roon with just enough to either fwd, pause, play ,rev …

On Ipad many times when i m browsing something else while ROON playing track. if i have to pause, i have to open Roon app once again - wait for a second or so to connect to the zone and then press PAUSE.

if there is a pop up (Floating or what ever) is there for easy access then it would be cool. I understand difficult working with apple (mobile devices) but maybe PC/Mac version can be done while working with Apple mobile devices. Android ? I just wrote for apple product in view. i m sure it applies for all.

What is your roon endpoint?
If you stream to a squeezebox or over Airplay (don’t know how it is with other endpoints), you can use the remote control of your endpoint. This four commands I perform with my harmony remote.

My biggest annoyance at the moment are the limitations in sorting and how artists are treated. Some examples; In Overview / tracks, I have fully 2700 tracks that are listed as ‘Various Artists’ in the album artist column, and I have a relatively modest music library compared to some. In iTunes, JRiver and many more, this is not an issue, you get a listing of artists and album artists, they are indeed very different things. Imagine selecting a copy of ‘It’s all so quiet’ and getting the Smurfs, rather than Bjork or Betty Hutton, this is frankly disturbing. I am fairly sure that adding track artists would be relatively simple and not get in the way of the GUI for those not interested? Am I wrong?

Things are even worse in playlists! You have the same album artist problem, and absolutely no means of sorting the view. Again, in something like iTunes or JRiver, you can sort on artist, album artist, track name, plus many many more. Again I am sure this is an easy fix without compromising the simple GUI approach. Am I wrong?

OK, that’s the end of my major gripes! However, I would also like to ask again about track ratings. I note form previous posts that adding track ratings IS a difficult thing to do, this I note. Because of this, I am not expecting it to appear any time soon, so not for 1.3 or 1.4. But having said that, Roon are asking folk to sign up for life, so what I would like to ask is will it EVER happen. If the developers advise that this ‘is not a simple thing to add’, does this translate as ‘it’s a long way in the future’, or ‘it will never happen,stop asking!’

Otherwise, a good job with 1.2, gripes apart, there’s a lot to like!

Anyway to have sort order in a playlist (I can’t seem to find one).

I did manage to get the sort order for Album, Artist, Track, but nothing within a Playlist

@John_Carrigan - yes, you’re right. You can’t apply a sort order to a playlist - you can only drag and drop the tracks within a playlist to change the sort order that way…

My playlist is over 500 songs so not much chance of my changing the order with drag and drop.

Can’t understand why the playlists can’t be sorted in order like they can in Tidal, Spotify, etc.

[quote=“trtlrock, post:74, topic:9534”]
2) Ability to customize “Album Type” with personalized category labels & sort order, rather than the currently useless (sorry, it is) Main-Single-EP-Soundtrack-Other choices, which actually only boil down to 2 different ‘piles’ of music within artist if used.
[/quote]@trtlrock, how would you categorize the typical artist’s albums?

That’s the thing – we need a framework of categorization that will suit both casual users and fanatical completists, and everyone in between. Whether it be jazz, classical, or pop-rock.

When you look at the album counts for my own favorite artists, you’ll see the scope of the problem immediately. And I know several (audiophile-ish) Deadheads & jam band fans that have literally >500 or >1000 albums from a single band, but have looked at (my) Roon setup and decried the lack of organizational capabilities.

I’ve got some good ideas (I hope) that I will put into a screen-grab cut/paste post, but that might take me a week or so to get around to. 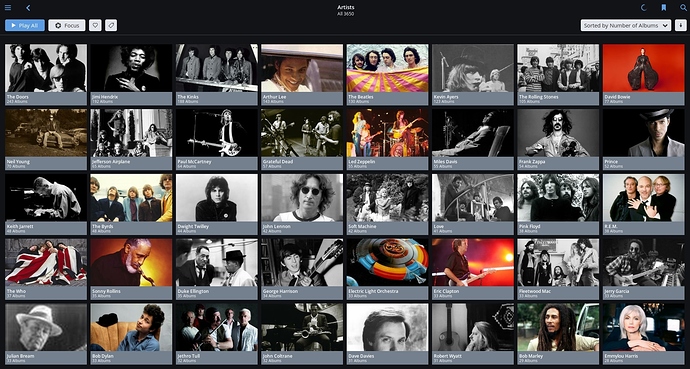 You’re clearly not a Dylan fan

I imagine there must be many bootlegs, fan tapings, soundboard recordings etc. in there? Look forward to seeing what you propose.

IMHO, the Radio function needs a user-set adjustment for how close the chosen tracks are to the “seed”.
At the moment, the radio tracks are very much like the seed, and are far too narrow in spread to be very interesting.

Regarding the request to improve Roon’s ability to sort an artist’s albums/entries on the artist page:

I too have been requesting this for a while. As well as improved categories in terms of sorting by release type, we need to be able to assign items to those categories and have them reliably sorted as per the assignment. My proposal of the categories/release types, and their display order had been:

Albums
Singles & EPs
Compilations (a “collection” of tracks by the same artist, not various artists; maybe this should be called “collections” or something else)
DJ Mix
Bootlegs
Other
(And then the current “appearances” etc)

Like trtlrock, having such a categorising ability would make browsing many of my favourite artists’ albums/entries much easier and make the organisation much more logical.

An even better solution might be trtlrock’s suggestion - allow the user to create their own personalised list of categories/release types, and allow them to assign their albums/entries to these types. Potentially some entries might be assigned to more than one type. Either method would be great!