Thank you for your efforts! Today I didn’t hear any drop-outs, so I guess there was not much to find in the logs. But I listened to music today for only a couple of hours in the evening, maybe too little for the bug to appear. (I had listened to music for several hours on the days where the bug/drop-outs happened.)

I don’t see any moving circle next to the bookmarks. (I think the analysis was already finished within a dozen hours after updating to Roon 1.5, i.e. probably done within the first day or two, but I don’t know for sure.)

I will revive this thread when/if the problem appears again in the coming days.

Hello @john, It just happened again, two minutes ago. I stopped the sound now. If you still got some logs from my system, you should be able to see it. By the way: no background activity running at that time on Roon…
(It happened after several hours of playing, today just now.)

Thank you for the report, you can continue to play music if you wish! I have sent request for new report in that time period.

@john It happened again just now, very heavily this time, the bugging literally ‘eating up’ the music within a minute of appearing (within few dozen seconds of buggy sound, it was completely distorting the music). After pausing and resuming the playback, the sound is normal again…

Thank you again for the report. We are investigating a few issues customers are seeing with Devialet streaming, and I have included your reports with that investigation.

Have you noticed change in how often this behavior occurs since you first started to notice it?

Some lucky days it does not occur at all. Other days it happens several times in the day. Today, just now, it did it right from the start, from the very first track I played! (Addendum: and again dropped bits of sounds, only 20-25 minutes later… am becoming ever less patient with this bug…) If this goes on like this, I will maybe decide to quit Roon until end of June.

Here are the specifications of the PC (screenshot): 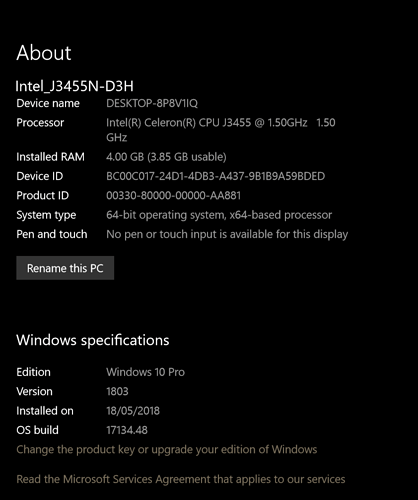 I will turn these two settings to “off” and report later, whether the situation changes… (–> 6 hours later: played now 6 hours without the bug…

@john unfortunately, the bug came back, just a minute ago (and as usual, it quickly grew worse and worse from one track to the next), despite all “background audio analysis” and “on-demand audio analysis” being off whenever playing music…

Can you try playing to a different zone for an extended period of time and reporting if you see the same behavior? This will help us determine where in your playback chain the issue is occurring.

@john I only have one zone, and the playback chain is simple: Roon on a PC connected via Ethernet cable, and the Devialet also connected via Ethernet cable (no wifi involved here, apart from the remote control Roon app on a MacBook air). (Again, I never experienced any similar bug earlier with Foobar + Devialet AIR, and with Roon 1.4 the same problem had only appeared a couple of times.)
Remark: Though it did not completely disappear, the bug seems to appear relatively less often when both “background audio analysis” and “on-demand audio analysis” are off.

Today it bugged at the very first track, only after 2 min 30 s; and even continues bugging now even after pressing pause and play again, and again! Only going to the next track helped make it go away, just now… (I had started the PC just shortly before starting roon. There was no little circle moving in Roon while playing, no audio background analysis or anything I can see on Roon, just playing the music… and bugging…)

It’s possible that you’re experiencing symptoms related to Core performance – the device you’re running your Core on does not meet our recommended specs, and we are seeing signs of performance issues in your logs. These symptoms are consistent with that, but they’re also consistent with some driver issues we’ve been working with Devialet to address. That investigation is ongoing, so for the moment I don’t have a timeframe for any resolution or conclusion on that issue. For now, you can rule out performance issues by seeing if these symptoms persist with a properly spec’ed Core, such as running Roon temporarily on a laptop.

In the interim, instead of skipping to the next track, you could initiate a “force stop” command that will hopefully allow the device to get back into the proper state. On windows, press the combination of “cmd” + “T” to do a “force stop”, which will then pause the music.

@john thank you for your feedback. It is very unfortunate if this fanless and recently-bought PC has a too weak Processor for Roon 1.5 (because the NUC7i7BNH NUC recommended by Roon is, in the versions I can find for sale on Amazon.de, too noisy; and buying a new unit would be premature if the problem ends up being the driver issue with the Devialet).
I have a question: Would one or both of the following 2 laptops I have available, be ‘good enough’ to test for the bug as you suggested?

Note: Further down the line, if I keep using Roon, I aim to use Roon’s DSP functions for digital room correction as discussed at http://blog.roonlabs.com/digital-room-correction/ ; thus if the bug is really caused by the PC’s specs, I would need to really change it if I stick with Roon.

Both computers should have the processing power needed for Roon, however the SSD in the MacBook Air should eliminate any potential performance issues with the regular hard drive. Thank you for your patience and effort while we try and get this working for you!

Thanks again for the online support. After about a week of using Roon on the Lenovo IdeaPad Z570, it seems that the problem/bug is not appearing anymore. So it was probably my PC hardware (more precisely the processor itself) that was getting too slow for Roon since version 1.5. In case the problem re-appears using the Lenovo, I will report here again.

It can be an important info for other users, i.e. maybe especially those with a Devialet, Roon users really need to take care not to use a PC based on a quad core Celeron J3455 - even though it’s a recent generation (and nicely silent because allowing fanless design), a much older i7 like in my older Lenovo laptop is much more powerful and better fit for Roon.

(By the way, Roon should in the longer term have a policy allowing to continue using version 1.5 when newer versions come up if the specs requirements of Roon continually increase, else the next updates may force more and more users to upgrade hardware too often, which would be costly and an ecological evil.)

This has been discussed here by Brian.

What has been discussed? I read that post you just linked but I fail to see the connection with the issues discussed in this thread… So you need to be explicit about what you mean.

What was discussed was the minimum hardware requirements for Roon. As you discovered what matters is not how new a processor is but that it meets the minimum requirements of Roon to guarantee the experience Roon is capable of providing. Nothing less than an i3 or equivalent. A Celeron is two steps on the Intel hierarchy below an i3.
Regarding future proofing, if you meet Roons’ minimum requirements now then you are unlikely to need to upgrade any time soon. Roon are a small team and if they had to begin supporting multiple versions of Roon for people unable to upgrade because they were hardware bound, it would become difficult to do. So the best bet is to meet their requirements and the vast majority of your concerns are taken care of.