Roon works for me much as it always has. It just works.

I think 1.6 is more variable in performance than 1.5, for me, but the extra feature of roon radio across Tidal lets me forgive it.

I really haven’t noticed any change in performance with 1.6 either, after the first week when the artwork was updating, though I only have a local library. Do you have sluggishness with local files? Have you changed DNS to 1.1.1.1 or 8.8.8.8 as this may help?

FWIW, I started using Qobuz when 1.6 was released. The Qobuz integration was amazing, but yes, everything seemed a bit sluggish and search in particular.

Well, I decided not to continue my Qobuz subscription. Interestingly, even though my subscription ended, Roon continued to query Qobuz in searches and search was still sluggish. About 2 days ago I removed Qobuz from Roon services. Not surprisingly, Roon search became a good bit faster again. I suspect the same is true for Tidal but have not tested that theory.

So yes, there’s room for improvement with Roon, but I also have very high confidence that the Roon team will continue to do that just as they always have.

It seems just as snappy now for me. The only time I have issues is if my RAM 4Gb gets saturated and then a reboot of core fixes this. Not a daily occurrence either.

Occasionally I reboot my iPad app, but I always have done.

I only have Tidal and my physical library.

Trouble accessing and slow loading with Tidal and Quboz Support

This identical problem started for me on the 13th. It has NOT resolved. My library items play fine, but Tidal is a 3-4 minute wait. Ordinarily, Roon gives some kind of error message about things loading slowly, but it does not do that in this case. Not sure what the problem is.

I agree this doesn’t act simply like running processes at once. There’s a significant lag afterwards where performance is still significantly degraded.

Problem with internet connection to Tidal and Qobuz Support

These all seem to be similar issues.

I fear Roon has a performance issue they’re not fully comprehending yet. Not claiming “qobuz-gate” or anything, just that Roon is MUCH slower for me, very often, since 1.6.

I suspect this has to do with severe network load associated with certain Roon functions - I have noticed it with searching, but it may be more than one function or activity.

I have seen all of these happen in the past 2 months. Since I use Roon at two different locations, and in one location the network has only a single switch and that location performs better generally, and the other location has a few hops between switches, and that is the slower location, I suspect that Roon does some things that are very network intensive and is sensitive to networks that are not completely streamlined. That said, I can watch quite a few hi definition movies across the network simultaneously.

Rebooting the core or closing and restarting Roon helps. But I suspect that is not necessarily because it is a memory leak. My guess is that It is because closing Roon shuts down some process that is the cause of the slowdown. The issue returns the next time the process is triggered.

One thing I have been able to repeat: Do 5-10 searches in rapid succession. See if your processing speed takes a hit. It does not immediately return to the original speed and performance is affected for a hangover period. Tracks also appear to load more slowly at the same moment.

Interesting. This is my sad little setup, I have 100mbps AT&T fiber as it’s just me and I don’t do much more than stream Tidal or Qobuz 24/7. I have two low-power routers acting in AP mode (Netgear on 5ghz with the ROCK NUC plugged into it with devialet expert pro as the only client). My 2017-built unit is hardwired with what I think is CAT5 but the low voltage guys didn’t do it to spec, so the AT&T guys nor facilities management hasn’t been able to pinpoint the issue with the wiring, so I use WiFi. No dropouts. I was seeing packet loss but not hearing it on 2.4ghz, but none on 5ghz. There’s some a**hole running a hacked router nearby as I get a -26db 5ghz signal from him in my kitchen and a -30db signal when my laptop is six inches away from my 5ghz ap. Firewalla could be causing an issue, but honestly things got less laggy once I removed the double-NAT issue and let Firewalla handle what I hope could be considered security 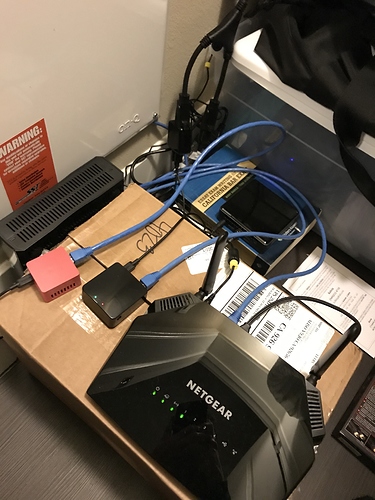 I should note that a building-wide memo went out about the WiFi noise issue, but the highest I’ve seen my noise floor go is -88

I observe the exactly same as you do and also reported in this forum. I’m located in Europe, i.e. in France. Maybe, this could be a reason that Roon database access from overseas is prone to delays. Qobuz with other 3rd party software is very snappy in return of searches, not so in Roon’s implementation of Qobuz. I thought it improved over time, since the 1.6 release, but then again I get these long waiting for showing a search result or start of play of a Qobuz album or after skipping in the play queue of 10 or more sec.
Reboot of Core helps recovering, but only for a few new searches or new plays. Not sure if it is only Qobuz related as I stopped my Tidal subscription after 1.6. release.

I could be wrong. Roon is a very complex technology that accesses local media storage, a local database, while at the same time streaming media to endpoints, accesses remote media storage, and accesses remote databases. From that standpoint I do not feel at all qualified to diagnose the exact cause of this. I do feel based on the correlation of activity to these slowdowns, that they arise out of some sort of congestion within Roon when certain features are accessed. I’ve been able to reliably duplicate the slowdowns with intensive searches.

Try 5-10 searches in 30 seconds to a minute and see if anything slows down for you. It may also relate to tagging, only in the sense that most of the time I’m doing searches it relates to bringing up objects - artists or albums - that I then tag.

FWIW I also experience inconsistent performance with 1.6 on a ROCK Core setup (UK) with no issues before. I’d say around 80% of the time it’s good enough (2-5 seconds for a search) but 20% of the time searches take forever (10 seconds - >30 seconds). This is particularly frustrating when just looking for a local album.

Edit: I use Tidal but not Qobuz

I observe that same behavior as @HWZ since Roon 1.6.
Already reported some time ago.

Same problems as @dhusky, here in Denmark. I think the problems came with 1.6.
No issues before that.
No Qobus, Tidal only.

Same performance issues here, also in Denmark. No recollection of any issues before release 1.6. I always thought roon was very snappy before. This did coincide with me purchasing a Qobuz subscription so that is likely a complicating factor from other comments I see.

I’ll add a +1 for this issue. I only had 1.5 for a short trial period as I joined close to the upgrade so difficult to compare. That said search was snappy for those two weeks and since 1.6 I get some long hangs. I’m also a Qobuz user.

I observe that same behavior as @HWZ since Roon 1.6.

I do too, especially the sluggishness.

Sorry if it has been answered but my previous subscription ended just one day before 1.6 and I just enabled the new one.

My main question is about using a tablet as a beautiful portrait displaying lyrics just as the desktop. I don’t want to enable the display function. But native in the app.

Earlier this morning I moved a few reports into the #support category so we can gather some more details and investigate these reports. We are definitely keeping an eye on the feedback, but if you’re having an issue with Roon, we’re here to help! We’d recommend you make a post in the #support category detailing what you’re experiencing and what your current setup is, and we’ll take a look.

We know there are some scattered reports of slowness with 1.6, but the Roon user base has grown quite a bit over the last few months, and broadly speaking we are not hearing widespread reports about performance. This doesn’t mean that there’s no issue, but it does mean we need to continue investigating why some users are seeing slower performance.

It’s also important also to draw a distinction between slow performance in general, and slow search. We’re of course happy to look into both issues, but because search in 1.6 depends on our cloud infrastructure, these symptoms are generally going to have different underlying causes. If you’re having a performance problem, please make sure to let us know specifically what’s slow – search, starting playback, navigating, etc.

Whatever is going on, we’re on it. And thanks everyone for the continued feedback.

So maybe the whole thing is that your servers do not cope with the sharply increased number of users (especially during peak hours) and you should upgrade your servers? I am inclined precisely for this reason and for such solution to the problem.

All of the above when it comes to Tidal and / or Qobuz. When network stream services are disabled, it all works very quickly.