Yes it’s sort of a social commentary on the idealization of popular figures whereas a closeup reveals their average-person-like humanity.

At least he has a close-up image…about 45% of my Tidal Artists have the Grey Hash box.

…I made a bet about my posts, lets see what happens…

about 45% of my Tidal Artists have the Grey Hash box.

I had to add photos for about 250 artists. Rote as that sounds, you’d be surprised at what pops from Google searches and it is more diverting a process than you might think. It’s all part of the hobby.

I had to add photos for about 250 artists. Rote as that sounds, you’d be surprised at what pops from Google searches and it is more diverting a process than you might think. It’s all part of the hobby.

Yeah I did that for those which allowed it…some I don’t get the option to add/change artwork. Also when I do it still doesn’t show up in the main page.

Searching Google for artwork is not something I’d expect I would have to do with an expensive piece of software like this…I made the comparison of the ‘advertised’ burgers vs. the ones they actually sell you…

I won’t get into any UI feedback, other than to say specific to radio - could do without the feedback box popping up after every track skip - is there a way to disable?

I understand that this is annoying to some people. It is a little annoying to me sometimes too. However, as far as I understand it, Roon is trying to develop an algorithm to run the radio feature, and this depends on user use and feedback. The connections between artists and tracks that make a radio feature possible is not information that Roon is just purchasing from a third party, but something that is dependent on user interaction. To this end, these questions that we are asked when rejecting a track are important to the eventual improvement of the radio feature. I might be wrong about this, but this is how I understand it. The “radio” service on an application like Spotify depends on the “feedback” of millions of users. Roon is not just piggybacking on an existing service like this, but is trying to replicate it, based on the tastes of their own customers. This is a pretty big task. Because of this, I don’t mind answering a few questions as to why I am giving a thumbs down to a particular track. Someone correct me if I’m wrong.

i admit i’m not going to read 1200 posts.
roon staff: i don’t like the new UI graphics. but i guess it’s a matter of taste.
but explain me what exactly do you think are obtaining when roon works this way:

image.jpg1419×310 73.4 KB
i admit that roung grey bubbles are better than grey squares.
but i think that you are really missing a point of view.

if we compare to promises (note: no grey bubbles there…): 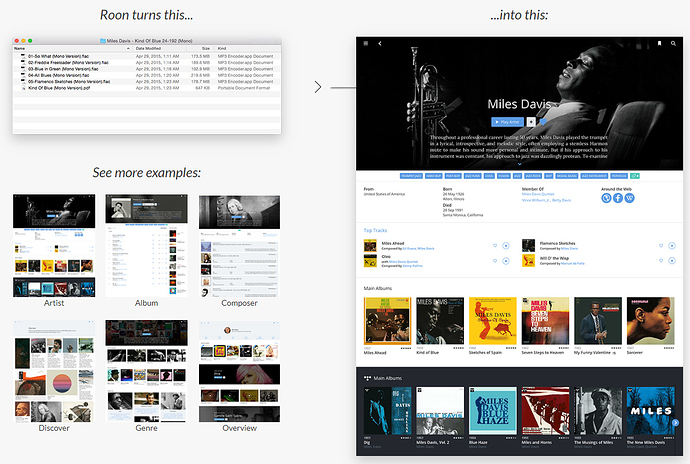 besides: the search page is also a nonsense

all black & empty space… why?

i add that the search has become much slower (but i have to say that i have activated tidal, for a promotional subscription… maybe that’s the reason).
and as have been pointed out by many other users, the logic of the search results (especially the “top result”) is in general quite incomprehensible…

Nice and accurate comparison…Roon turns ‘this’ into ‘this’

This–> TIDAL Artist pics :into: This–> Grey Squares

Thanks for the info, looking forward to the update

Roon 1.6 with Qobuz, for a Classical Music listener like me, is just fantastic. it even gives me the sleeve notes & libretti. it means I can now ditch iTunes Music & use Roon for all my listening. Great stuff.

A quick thank you for the Qobuz integration, which I’m really enjoying. 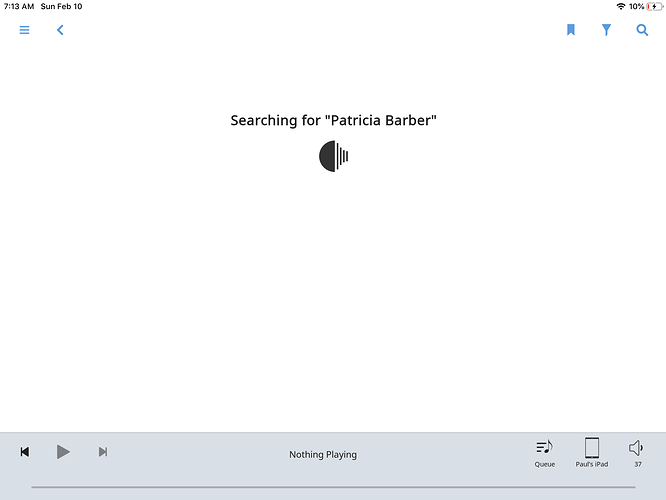 As much as I’ve been enjoying roon, think I’ll be switching back to JRiver until there’s a new release of roon. The now playing screen is annoying, distracting and embarrassing. (“You pay how much for that?”)

I’ve really, really tried to “get it” but the artist photos are just not working for me. Spending too much time trying to track down usable images. Some of the images roon shws would never be approved for an album cover by the artist. That’s one reason album covers are better for display. There’s usually some thought and creativity that goes into making them, and some are works of art.

That’s my feedback . Will check back for a software update and hope for the best.

Hmm… Don’t know what is happening. It was exactly 4 seconds for me. Complete with image construction. However, I have an internet connection at 200 Mbps. 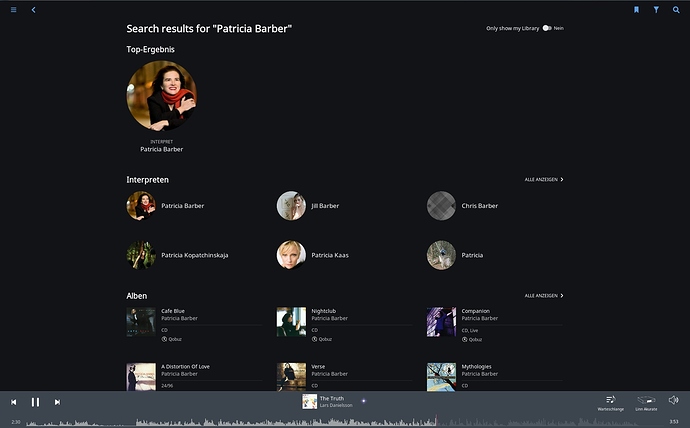 I’ve followed this thread since it began but can’t remember if this has been brought up previously. I have show more covers and art turned on and when viewing Albums on my iPad it displays 21 thumbnails. However, as soon as I Focus on ANYTHING, it only shows 8 thumbnails. It didn’t used to work that way. Wouldn’t mind if it went back to the way it was before.

It’s a bug, roon will fix it in next release.

The “radio” service on an application like Spotify depends on the “feedback” of millions of users.

I’m all up for Roon requesting feedback to improve their service, but make it optional.

This was a known issue prior to release of 1.6.

I wish I could say it will be fixed in the next release, but at this stage all I know is that a fix is underway.

Thanks for sending those result times back. Clearly something was different between your times and mine. Mine was consistently 30+ seconds and slow to queue up songs. So… reboot and clear all cache. Same thing we tell our business community when they have problems

. Now 4 seconds back on searches.