We are going live today with one last maintenance release before we bid farewell to 2019!

The biggest change in this release is overhauled transport controls on macOS.

On macOS High Sierra (10.13) or newer media keys for play, pause, next, and previous should work automatically (as they do with Music and other apps), and this includes media keys exposed on the Touch Bar. Roon will also no longer require users to set accessibility permissions on these versions of macOS either.

As part of these changes we’ve also added support for the Now Playing widget in the notification area, where you can see what’s currently playing and interact with transport controls: 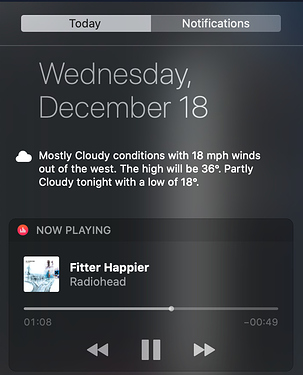 This release also includes some changes related to our recent OpenGL changes. On Windows, we will warn when your system does not meet our OpenGL requirements, but we will no longer prevent you from opening Roon.

We’ve also fixed a few crashes, and addressed some issues related to the “Shuffle” feature designed to work inside your library (such as on the Genre page, or when the mode is enabled on the Artist screen) that were having issues in Roon 1.7.

Finally, we’ve released an update to Roon Bridge that includes some minor packaging changes and bug fixes. These changes also mean that Roon Bridge will now require macOS 10.9 or higher.

The full list is below, and Build 511 is rolling out now! Thanks everyone!

Roon Build 511 is now rolling out for macOS, Windows, Windows (64 Bit), and Linux. Updated versions of Roon for Android and iOS have been submitted to their respective App Stores and will be available soon.

Version 171 of Roon Bridge is also available, although on Windows it is replaced by Version 172.

Improvements and Bug Fixes for Build 511: