Rebuilt roon and ROCK from scratch, rescanned the whole database in the hope this may resolve the issue; seams a little better but still no auto real-time scanning on the fly?

The software (version 764) appears to have made some regressive moves here.
This was a known issue which was only fixed a few weeks back, now its broke again.

Over all looks and feels better… but should this really have been released yet?

Anyone else experiencing this or know of a fix?

This is my setup:

Frustratingly the update has ignored this issue? PLEASE address this fairly simple? issue!!

@support V764 still continues to have this issue, is there a fix coming?

Apologies for the delay in reply here, team bandwidth has been limited since our recent release.

What do you have your Rescan Interval set to? 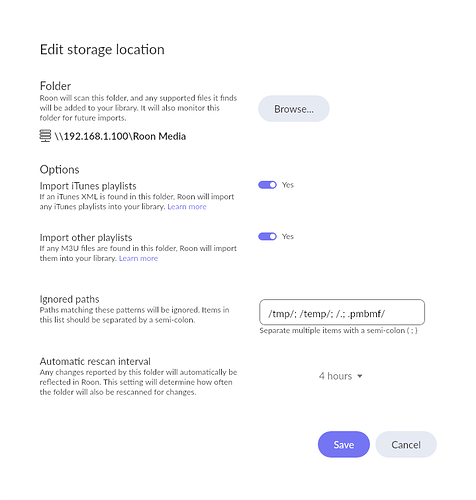 Are you saying that the files are not picked up when at the rescan interval properly?
Are you using IP or Hostname for the share?

Hi - Noris, thanks for getting to this! Appreciate you guys must be super busy fire fighting atm!!

I have it set to 1 hour and it works within the hour.

BUT in the previous version files were added/removed in real-time so only took seconds; which is what by definition should happen.

@noris This is how i have it setup: 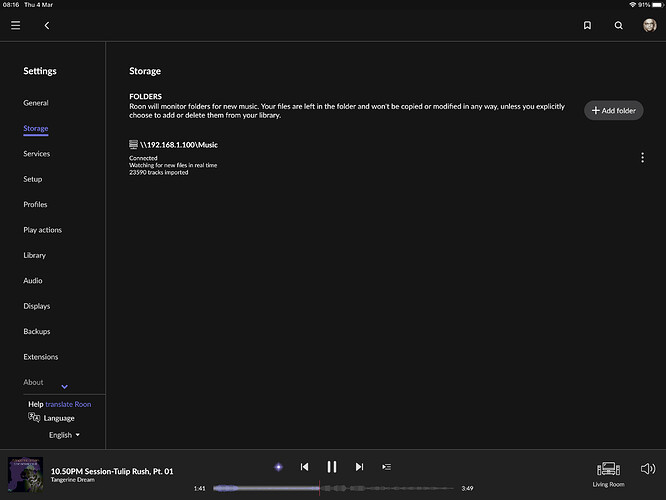 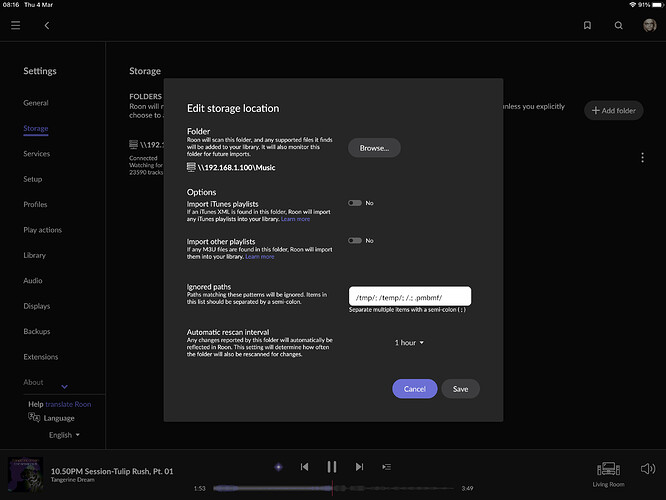 I have it set to 1 hour and it works within the hour.

Thanks for confirming that it works via the Rescan Interval.

BUT in the previous version files were added/removed in real-time so only took seconds; which is what by definition should happen.

This behavior is a known limitation due to the drives themselves reporting the changes, please see the following threads for more details:

Roon is not watching for new files in real time Support

Hi @ar9, As I noted in my linked thread above, this has been a limitation that we are well aware of and have done what is possible to mitigate it as mentioned by our CTO and Product Manager in the following threads: I wish I had better news for you here but at the end of the day Roon relies on the NAS share to report file changes reliably and if the NAS is not performing this function as expected, Roon won’t be able to automatically see the new content.

Hi Noris, I would not consider this an issue with SMB, rather it is an issue of roon. The NAS performs 100% will all other media players and reports changes instantly on PLEX media server and db poweramp Asset 7.2 and all other players and programs. In fact It’s JUST roon that can’t perform.

Also in the final version of roon 1.7 had this working perfectly so it is/was possible… It’s a little frustrating that this is treated as if its an SMB protocol issue. IF roon know it’s flakey then change the way the protocal works! don’t just pass it on as its ‘for other’ to resolve.

Just a thought here, roon is primarily a networked audio player - surely network connectivity and correct functionality should be one of the primary functions roon should pay heavy attention too!?