Roon 1.8 Where can I see Recommendations

I swear when I was first using Roon 1.8 today I saw a new feature showing a Recommendations directly related to what I was listening to real time. I do not see this now. Not sure if this is user error or if something disappeared. Any ideas?

you are not mad, it was there and is gone

As it is online content i guess it will come back. Recomendations did not fit to my taste anyway, hopefully it is better then.

+1
Very useful comment and I can confirm this observation. Hopefully it can get fixed soon. I am curious about the improved AI.

Improved and one assumes more resource intense, hence the outages. Part of me feels bad for the amount of flack the devs are experiencing right now. I can only imagine they had all wished this update was released silently and someone somewhere thought it would be a good idea to make a splash. Sadly this is what you get when execs rather than devs decide release dates.

Ah thank you…so good not to be mad after all! I don’t recall where in the app I was when I saw it but I was enjoying exploring the recommendations and sampling some tracks. Was hit on the home screen, do you recall?

Yes, it was on the home screen, “Releases for You” with categories, and with “Latest” and “All” I am not sure if the last was called “All”

And what about the right-side list of albums similar to the one you’re currently listening to? I found this a great benefit to explore albums I’ve never heard of while listening to one that I have. This, of course, only worked because I have Qobuz, but it was extremely useful. Is it gone for good or am I just mssing where they hid it?

+1 on the “similar to” recommendations - without that, I may as well use iPeng/LMS

Seems like I lost more with 1.8 than I gained.

We’re having some server issues right now and it’s preventing a lot of the new recommendation features from functioning properly – we’re working on it and should be fixed soon.

That’s the good / bad that you get from a big announcement for a release, user engagement. Software always works fine without users.

Aha! I see the Selected discography and Recommended Albums now shown just below an album’s track listing. Awesome! And amazing that you’ve been able to get it resolved so quickly. No doubt that this is Roon’s biggest and likely most significant release.

Where is the long promised working version of Tidal Top Tracks???

Even the cheap USB Audio Player Pro gets it right.

Seriously this is such a basic feature that seemingly everything else does correctly and yet it’s missing from roon. I was really hoping 1.8 would address this.

There should be popular tracks at the top of the overview tab for most artists – is that what you’re looking for? 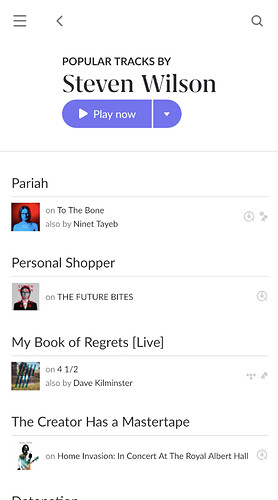 No… We are looking for Tidal Top Tracks…

The “popular” tracks offered by Roon have been for the most part irrelevant. If you look at my post above… You can see the Tidal Top Tracks in two other apps match perfectly to what Tidal offers… Not so much with Roon. Tidal Top Tracks offers most played tracks via their service. This is great for music discovery. Roon usually list songs that are far from popular… usually unheard of.

I’m sorry if I have a tone… but you act like this has never been mentioned or brought up before… It’s been a problem for years.

Top Tracks for Each Artist Not Consistent Roon Software

As well as an older an longer conversation here…

I just found out about Roon and have been trying it out for the past few hours. I really like it so far. In particular, I like finding new music with the Similar To / Followed By / Influenced By / Collaborated With / Associated With / Composers information (which apparently comes from allmusic.com) But… there are just some things that are weird. Top tracks, for example. They just seem flat out wrong a lot of the time (I’m using Tidal). Search for “Nina Simone”, and you’ll see that “Feeling Goo…

Thanks for getting back to us.

As the user above mentioned the roon ‘popular’ suggestions differ hugely from tidal (or other service) top tracks.

This has been asked for for a LONG time. The last response we got from roon was a year ago in this thread: Have option to always show "Top Tracks"

There are countless new users who are somewhat gobsmacked that roon lacks such a basic feature.
We really appreciate all the work that goes into roon metadata, suggestions etc, but this is one instance where we simply need a list of top tracks as ‘voted’ (played) by the largest number of people. Ie: Pull from tidal or billboard as every other app does.

It wouldn’t be an issue if roon’s “popular” suggestions roughly lined up with tidal/spotify/qobuz/billboard’s top tracks listings, but it usually does not. As shown in the screenshots above.

This definitely is a show stopper for many users. This was very often when my family members were using Roon or friends coming over and complained about the same.

This is definitely today a very basic requirement that Roon should finally address quickly.
@danny Or is there a problem we are not aware regarding implementation?

Roon please please listen to us customers. We have been asking for this for years!

Even just having a setting/toggle to feed “popular” from either roon data or tidal instead would sort this.

This is exactly what I have been asking for. This has to be possible, roon already connects to tidal and gets data from allmusic. If you guys are trying to push music discovery your way great but please have an option to either show “top tracks” from tidal additionally to popular or have a toggle for popular source(roon or tidal).

Please guys give us some confirmation this will be fixed. I stayed as a subscriber, and not lifetime, because you guys said it was the more sustainable model for you so I helped. Help us back, I’ll have no choice be not renew if we can’t get top tracks