Roon app on mobile with Android 7.0 no longer starts since last update

I repaired my Android with Xperia Companion on my Windows PC, because several apps did not finish the update and since the last update of the Roon app, they can only be updated by uninstalling and reinstalling , Since then, the app runs only 2 times after an installation, then come these 2 messages that I can only photograph, because the message disappears in a screenshot. After that the app is completely finished. On my Sony Xperia Tablet with Android 5 it still works without problems. But since the last update on my phone Sony Xperia XA Ultra only as described after a new installation of the Roon app only 2 times afterwards see pictures. 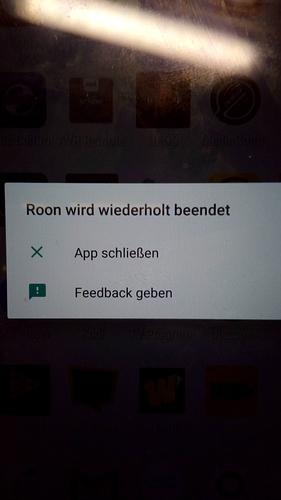 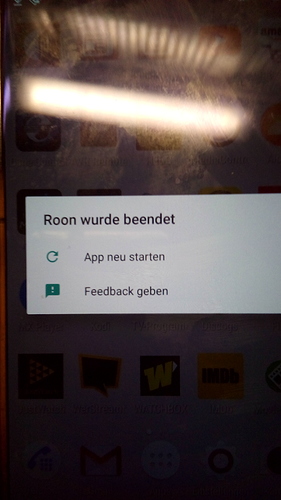 If you reinstall the Roon app once more, does that help at all? You can also try installing the android APK from our website here: https://roonlabs.com/downloads.html.

I repaired my Android with Xperia Companion on my Windows PC, because several apps did not finish the update

Can you provide more info in this regard? What exactly was broken with the Android? Have you performed an Operating System reinstall?

I got the message that updates are there and I opened Google playstore, clicked the button to download and it started downloading and it only worked for a few to 100%. Even if it went up to 100% then the installation got stuck and was not finished. There was an error message and only through a complete uninstall and new installation, these apps could be used again, for example, Adobe Acrobat Reader. The Google translator app could also be reinstalled, but when downloading the offline language German for me, it did not go further than these 2 images show. 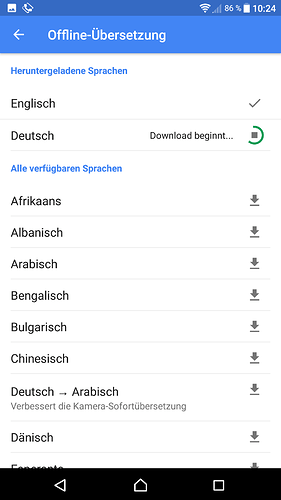 Screenshot_20190510-102433.png1080×1920 109 KB
I got the message that updates are there and I opened Google playstore, clicked the button to download and it started downloading and it only worked for a few to 100%. Even if it went up to 100% then the installation got stuck and was not finished. There was an error message and only through a complete uninstall and new installation, these apps could be used again, for example, Adobe Acrobat Reader. The Google translator app could also be reinstalled, but when downloading the offline language German for me, it did not go further than these 2 images show.
Henry_Ulbrich (Henry Ulbrich) May 16, 2019, 11:20am #5

I try to send a little video so everyone can see what I mean. Unfortunately, I had to convert it from mp4 to gif. THAT is a Google translation

Thanks for sending that .GIF + info over. From what you have noted so far it looks like your Android system might be having some issues with the operating system itself, especially if it is getting stuck on installing other apps/packages.

If using the Roon APK I mentioned in my previous post does not resolve the issue, you may want to perform a backup and then an OS reinstall on that device (and possibly update it to the latest firmware version too).

There are no newer firmware or. From Sony is offered for this device no newer Android version. As already described, the app works so well on the Sony Tablet with Android 5 without problems. I have downloaded the apk from the roonlabs.com page and installed it over the existing versions with the same result, so the error message and crash of the app. After uninstalling the roon app and installing the downloaded apk, it works for the time being, but in the Google playstore there is an update of the app to see what is certainly the latest version, which I will not install for the time being because it brings the error again. Please fix the bug in the version in the playstore. This is a Google translation. 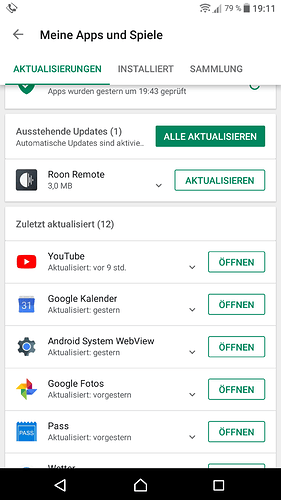 As far as I know the APK on our website should contain the newest version of the Roon app.

Can you post a screenshot of what it says in the Roon app when you navigate to Settings -> About? It should list the build number there.

Additionally, if you press the down arrown next to Roon remote in the play store, can you post a screenshot of what is listed there? 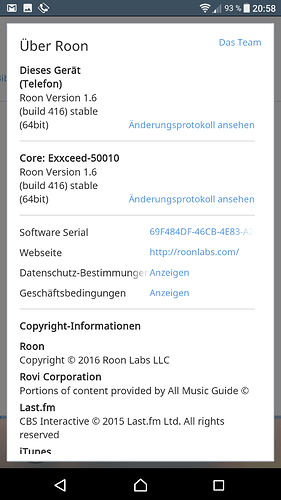 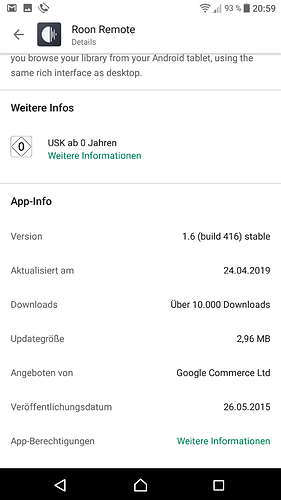 Thanks for those screenshots. If the Roon app is currently working, I would not perform the update as of now. I have put in a request for the QA team to take a look at this thread and I will let you know once I hear back from them.

Thank you for the first try

I just heard back from QA and they confirmed that we do have the latest Android APK version saved on our website so this is what should have been installed for you.

We can’t say for sure if performing the update via the play store will cause any further issues, QA has noted that the strange behavior you mentioned sounds like a system-level issue and you should address first.

You might want to reset your phone to factory default settings and/or reinstall the operating system to see if that helps fix the issues with the app installations since it appears you may be having more issues than just using Roon on that phone.

Unfortunately, the roon app crashed again and can not start anymore. I will reset the phone, but I have the feeling that even if I try on the Sony experience software operating system to re-play the roon software repeatedly reproduced the same error.So far I have just installed the roon mobile.apk and not the update from the Google playstore.

If the app is crashing again without you changing anything this further indicates that your Android Operating System is not in a stable state. Please go ahead and reinstall or repair the operating system. We have many Android users and I have not seen any reports of similar behavior recently, something about the device is causing these issues, especially if you are having trouble with other apps as well.

I first tried to reinstall Android which was not possible see picture![DSC_0714|690x388](upload://fgbWYz2teQBmgdIcUD5k3DtdgyW.jpegSo I’ve done the repair function again and reset the phone in the factory state and reinstalled everything again. Currently the roon app works from the roonlabs.com site. But as it has since the update of 24.04.2019, some apps are working very slowly. So far, the roon app works even though the Google playstore has automatically updated the playstore version tonight. 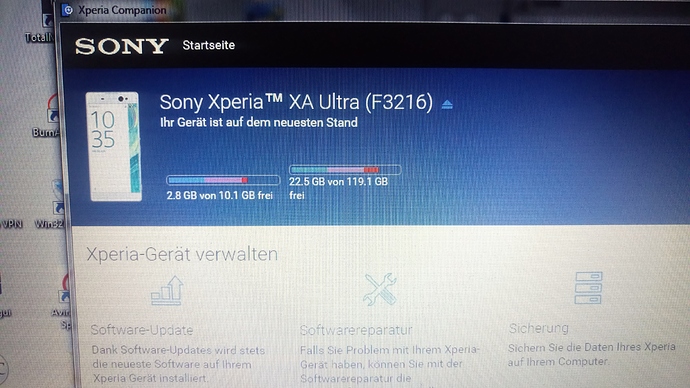 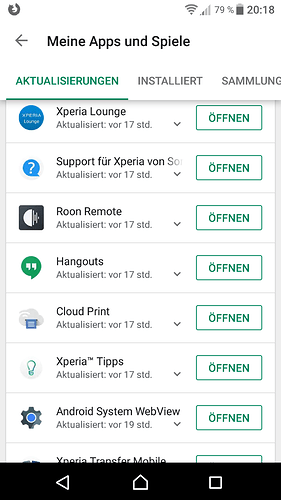 Glad to hear that the Roon app is working properly after the latest OS repair. If you have further issues please feel free to reach out to us further.

I wanted to try since this afternoon to give the current status message that the app has crashed repeatedly after last night, the operating system of the phone, the Roon app has automatically performed the update. After that, the app ran a few times without problems and crashed repeatable. Since the login on the roonlabs.com side of the phone did not work, I send the pictures and gif videos from my tablet. 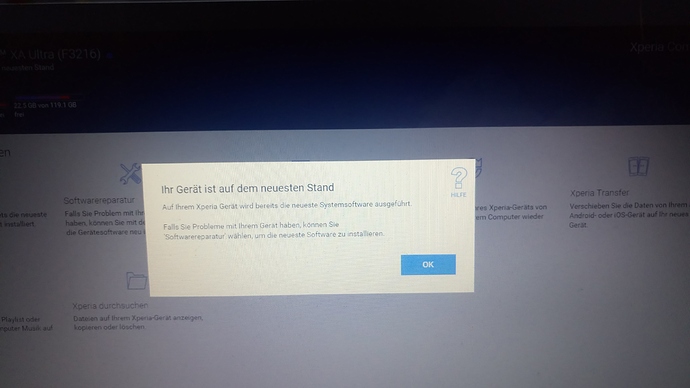 I forget the Crash video

Thanks for sharing those screenshots. Can you confirm that Roon is the only app experiencing these issues?

Based on your previous feedback it seems like something is going wrong with that phone and the Operating System is not stable, especially if an operating system reinstall is not working as expected.

Can you perhaps reach out to the store you bought the phone from or to your local Sony store to see if they can run some diagnostics on the phone and perform the operating system reinstall?

I do not believe that pressing “repair” is the same as reinstalling the system and there might still be some issues with the phone even if you repaired it using the software.

I bought the phone 23 months ago on Amazon and since the last update of the roon software, it only came with eonigen apps to the automatic update by the Google playstore error messages opened and these apps only by uninstalling and reinstalling the function brought can be. If I have uninstalled the roon software, turned off the phone and restarted the updates of other apps work without problems. My conclusion is that in the program lines a small change in me caused this problem because prior to the update of the roon software for Android this problem did not occur.