The NUC does not act as a router. You will have to connect the Roon Bridge device to a network with Internet connectivity to auto-update.

OK. But the About tab can show the version of Roon Bridge at least?

Roon Bridge version shows up in the audio devices tab, not the about tab. (Or at least it does for Roon Ready SDK devices.)

You are wrong. Look : 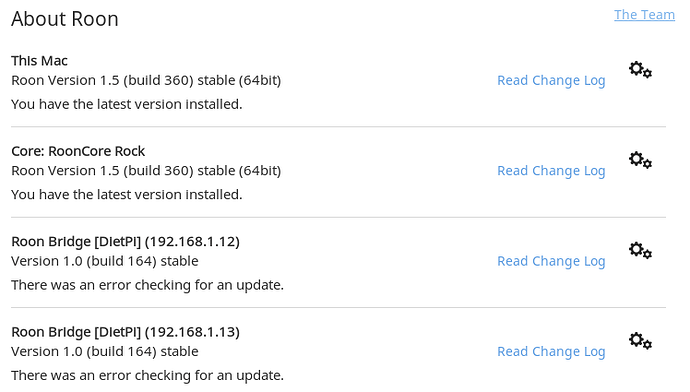 You will have to connect the Roon Bridge device to a network with Internet connectivity to auto-update.

And my Roon Bridge has the static IP from another network:

My network with Internet connectivity:

Therefore I would like to receive a response from the Roon staff.

Again, ROCK is not configured to forward traffic between interfaces. If you want that, you need to run Roon on a ‘regular’ Linux distribution of your choice, where you can ssh in and configure IP forwarding at the OS level.

Again you are wrong - ROCK IS configured to forward traffic between interfaces! So I playback Tidal tracks and tracks from my NAS by Roon Bridge .

Actually, I’m not wrong. Roon Bridge playing has nothing to do with IP forwarding (which ROCK does not do, and which you need for things like the Roon Bridge to auto-update). Roon Bridge does not talk to the music origins itself; it only talks to Roon Core. You have Core running on the ROCK, and thus the Core can see both interfaces. It pulls music from the origin on the Internet-enabled interface, and pushes it to the Roon Bridge on the private interface. It’s doing all of that at the application layer, not the OS IP layer.

But every reply of yours here has been openly hostile in tone. So you needn’t worry about me replying again, as I’m done trying to explain the under-the-hood to someone that attacks people trying to help them.

OK. Why Roon Core cannot update the Roon Bridge at the “application layer”? I would like that.
@danny ?
PS There is simply no other way to update Roon Bridge without changing at least temporarily the network settings in the software of my endpoint (I really din’t want to do that).