Since installing a BT Smart Hub I am unable to add new music to Roon as it cannot get access to the internet to obtain metadata – see attached image. I have tried all sorts of different network settings without success, including using a fixed or dynamic IP address, etc. 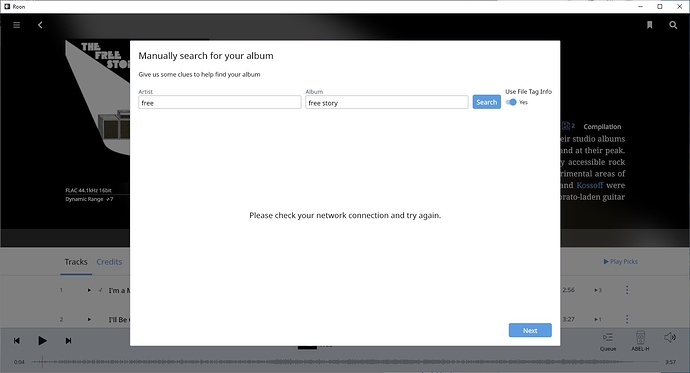 I have Roon Client installed on an Intel NUC configured for dual boot (Windows/Linux). I boot into Windows 10 for Roon management (adding music, editing metadata, etc.). Used to work with the old TP-LINK router until it apparently died but I am unable to judge whether the error lies in the router, the network settings, or some other PC hardware. I can access the internet fine via Firefox (doing it now).

Whenever I have changed routers these sorts of access issues have been firewall related. It can be that:

Avast and Windows Defender block Roon from playing on my pc even after setting a rule allowing Roon and RAATserver as authorized apps. If I turn them off Roon will play. The core is on a NUC in the other room. Please advise.

Have you tried directly connecting the NUC to the BT Hub, to narrow down/eliminate any intermediate connection issues?

Thanks very much for the suggestions, some of which I had tried. In the end I have managed to solve this via the “random walk” method. Although I had tried resetting various network values without success, and rebooting the server in between, this time I set the DNS server to 8.8.8.8 and saved (everything stopped) then set back to what I think should be the correct value for BT (62.6.40.162) and magically everything started again. Looks like these things get rather firmly cached and have to be reset by force majeure…

Hi Andrew. I thought I would just check something with you if you don’t mind, even though everything appears to be working at the moment, because my understanding of networking is rather weak. Also, I am not certain that I don’t have a problem with the BT router/phone line, as BT seems to struggle to see the hub.

The DNS server value before I reset them manually may have been 192.168.1.178, which according to dnschecker.org is a primary BT DNS server, whereas ~.162 is a secondary server. My question is – do you know if ROCK would have picked up these values automatically after the router was replaced? I don’t recall having to set anything manually when I originally installed ROCK (and using a TP-LINK router), but that was some time ago and my memory may be faulty.

Incidentally, I did not find that Windows Defender interfered at all and it is running OK right now on Windows with Roon Client. (When booting into Linux I use ufw firewall, and that always blocked Roon Bridge so I could never use it as a client.) Thanks.

I’m ok ish on networks, but only when they’re in front of me, I’m afraid

I don’t think you need a fixed address for Roon; I’m fairly sure mine is dynamic