Description Of Issue
After running the Roon client for a while the CPU usage goes above 200%, the fan is on max and other CPU intensive programs (e.g., IntelliJ IDEA) are notably slower.

What is going on? I thought that the ROCK is supposed to take care of all the heavy lifting?

Maybe its hungry :). I’ve seen this behavior in the past, but not limited to Roon client. I would see some random process unexpectedly feasting on CPU. I wonder if this is some MacOS issue. Try rebooting your Mac to see if it fixes the issue.

I’m still seeing this from time to time on my 2019 MacBook Pro. Sometimes, toggling Wi-Fi helps. This bug has been around for most of this year.

I am using a late 2012 MacMini as core and here is a screen shot while playing 6 meridian zones. I like the other poster did find that disabling wifi on the core helped significantly, 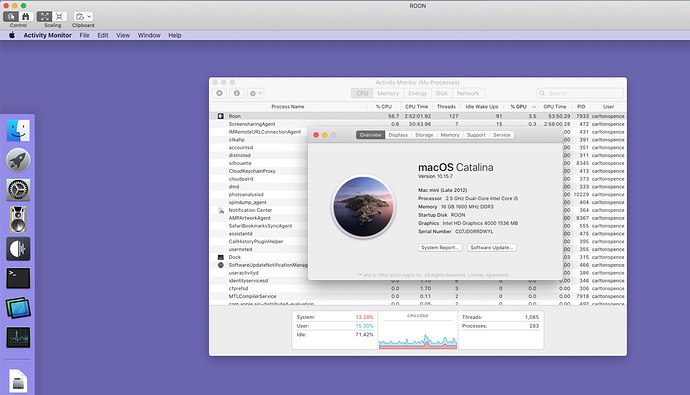 It’s a known issue dating back to April - May with currently no fix in sight. Doesn’t hurt to re-create awareness though. If you ask me, this should be a top priority.

Thanks for suggestions on workarounds. However, I did not spend >$600 on an Intel NUC ROCK to still have to figure out how to avoid fan noise and my laptop slowing down.

This is unacceptable and should be top priority, like @Nepherte says.

add yourself to the party:

Please put the iMac Pro 2017 on the list of unlistenable due to fan speed. Hopefully you will have an update soon as my Roon membership has just renewed… Thanks Guys

Not only the Mini 2018 is affected… many models are.

Description Of Issue
After running the Roon client for a while the CPU usage goes above 200%, the fan is on max and other CPU intensive programs (e.g., IntelliJ IDEA) are notably slower.

What is going on? I thought that the ROCK is supposed to take care of all the heavy lifting?

I also have this on my macbook pro - though i suspect this is a Roon on Mac issue. I’ve had this on 3 different systems at this point on Both Mojave and Catalina.

This is beyond acceptable! I have extensively posted on this issue for ONE YEAR now and this is not fixed. Have a look at the thread here: Very high CPU load on MAC

There must be something else going on that makes this hard to replicate. I have a Macbook Pro 2020 (i5, 32GB RAM) and I’ve never ever had this problem. Nor with earlier Macbook Pro or Macbook Air models. Not on WiFi, not wired with Ethernet adapters.

It’s also not entirely clear to me what causes the cpu usage issue. I have the same machine as you, and never had that problem. That being said, I am affected by the gpu usage problem

Hello @Brjann_Ljotsson, and welcome to the community! My apologies for the trouble here, but @mavmcl has the right idea here. Our QA team is currently working towards a solution for this issue and your feedback would be appreciated on the thread listed below. In addition to that, we will provide updates on that thread as they become available.

Hi @nuwriy isn’t about time to set some expectations about a time for a potential fix? this issue was reported in may 2019! what does Roon team thinks? @Danny posted in the main thread but dropped after a reply. I think we need some expectations set.
Thanks.

Thanks @nuwriy! I hope that you are able to resolve this and I will follow the other thread.

Don’t worry! I reported this one year ago and it’s still there. Which mac you have is irrelevant to this condition. Had this on 3 macs (MBP15, Mac Mini, MBP 16).
@danny Any chance we could have a glimmer of hope or do I have to completely give up on Roon? Which is quite difficult after the software and hardware investments!

Turn Wifi on and CPU/Network load is going down. Then you can turn Wifi off and the load stays down. This works on my iMac (Retina 5K, 27 Zoll, 2019) with Catalina 10.15.7 and load stays down after restart of Roon and also after reboot.