Roon crashes on startup and problems with artist [Resolved]

Stange things happen…
From at leat a couple of weeks Roon randomly chrashes on startup and I have to start it several times (2 or 3 or even5-6 times) to make it work.
For Example this morning I had to start it 3 times until it worked
Here’s the logs for these 3 times https://drive.google.com/open?id=0B2ZBnEiyIekYOHl4b1UwdGFkTU0

immagine.jpg1905×889 293 KB
but if I search sansers is showed only as tidal artist but in library albums his albums (tidal and physical) are showed in library ones.

immagine.jpg1901×652 286 KB
I’m pretty sure this didn’t happen in the past but I can’t tell you if this happens for other artists too.

I had the same since yesterday. It was playing all Saturday, but last night it started freezing - I could still play though, but no controls. I tried to restart, but now it wouldn’t. I just got the blue spinning wheel.

I looked similar to the issue I had a few weeks ago with the 64 bit version. I learned that was caused by a Windows update. I was advised to use the 32 bit version in stead. That has worked well until yesterday.

So for the moment no listening with head set on the PC. I have tried to reinstall the 32 bit version (on top of the existing software). That did not work.

Hi @Andrea_Tacchetti ----- Thank you for the report and sharing your feedback with us, sorry to hear of the troubles. A few things moving forward.

First, thank you for the logs. I took at the upload and it appears that you have provided only a few of them (i.e Roon_Log, Roon_Log.01, and Roon_Log.02). In order for us to successfully evaluate what could be causing this behavior we will need a complete set of your Roon logs. Would you kindly please re-upload?

Secondly, can you to please provide me with the details of your current setup, as seen here.

Hi @Kim_Jensen ----- Thank you for chiming in and sharing your observations!

As I have asked Andrea, would please provide me with the details of your current setup as seen here as well as a set of your Roon logs using these instructions.

Here’s the link for complete set of logs

Thank you and Bye

Thanks for touching base with me @Andrea_Tacchetti, very appreciated! Confirming that your setup details and logs have both been seen/received.

Moving forward, I have placed your logs into our queue to be evaluated by a member of our tech staff. Once my report is updated and passed back, I will be sure to share the team’s thoughts/findings with you in a timely manor. Your patience is appreciated while the team conducts their analysis.

Hi Eric,
Sorry for the late response. I tried this:
I uninstalled Roon completely from the PC to make a new install.

I tried the 64 bit version again, but I still had the issue with temporary freezing in the interface. Music was playing uninterrupted.

I uninstalled again and made a new install of the 32 bit version. It has been working without problems for a few days now.

I noticed something strange. - When installing, at the window where you choose if you want it to work as remote or play from the PC, it already appeared on the phone and I could start playing music on the PC, using the phones interface instead.

Thank you Kim.
I’ve some questions:

Thank you and bye

Hi @Kim_Jensen and @Andrea_Tacchetti ----- Thank you both for the follow ups, and the feedback! Greatly appreciated!

Kim: “I uninstalled again and made a new install of the 32 bit version. It has been working without problems for a few days now.”

Andrea: “Are there any limitations in performance with 32 bit against 64, especially regarding huge databases management or speed?”

So Eric do you think that the problems I’ve been through are related to 64bit version?
And if It’s that way and I have to switch to 32bit version, considering that I have Roon running on one PC, how do I switch from Roon “all in one” 64bit to Roon server 64bit+Roon remote 32bit on same machine?

Hi @Andrea_Tacchetti ---- Thank you for touching base with me.

At the moment it’s hard to say if the behavior you are experiencing is related to your implementation of the 64bit version of the application, but, I do think this will be a good test (64 bit RoonServer + 32bit Roon remote) to see if things improve.

I will be sending you a detailed PM momentarily, laying out exactly what you need to do in order to setup the mentioned configuration

Thanks for your support Eric!

Same problem again. After working for a couple of weeks, Roon starts to freeze (Windows 32 bit) 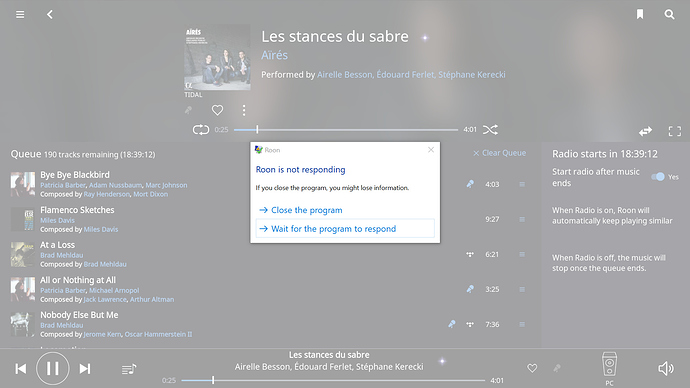 As before it continues to play from the playlist. Only the graphics are frozen.

I’ve switched from Roon 64 bit to Roon server 64 bit+Roon Remote 32 bit on same PC and so far I never experienced the crash on startup.
Just once I had a freeze on Roon remote similar to Kim’s one; remote crashed so I forced closing and after restart it worked again.
This happened without any music interruption so not a major issue, anyway I will report here if it will happen again.

Hi @Kim_Jensen ---- Thank you for touching base with me and sorry to hear of the troubles.

Moving forward, can you verify what graphics card is being used in the machine hosting the 32 bit version of Roon currently?

Hi Eric,
Thanks for helping again
It is Intel® HD Graphics 4000
Regards
Kim

You might look to see if you are using the latest Intel Graphics Drivers, the latest version is from May.

Thanks for getting back to me @Kim_Jensen! I appreciate you providing me with the requested feedback!

I agree with @Rugby’s suggestion, in regard to confirming that you are making use of the latest graphics drivers. Can you verify?

Hi Eric,
I followed the link yesterday and updated to the latest driver. So far no issues