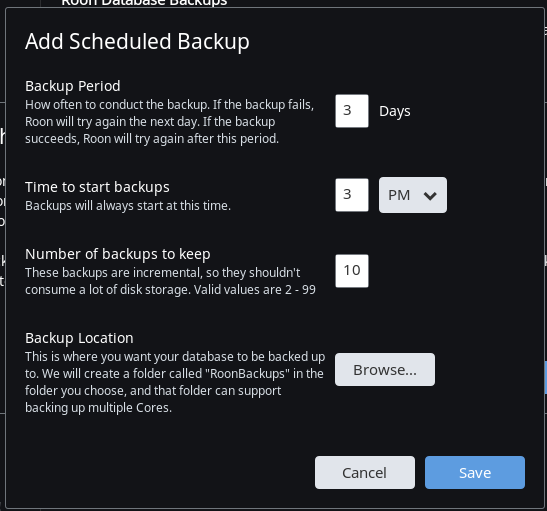 Thanks, this is probably to way to go. Schedule 2 Backups to different locations. Is there any interference when they take place the same time?
The alternative way, maybe with GoodSync works, does it for you between MacOS and a Qnap NAS, using NFS, now that folders are hidden? The sync program I‘m using has problems to sync hidden folders over the network, specifically because both folders, hidden and unhidden co-exist in the RoonBackup folder.

Is there any interference when they take place the same time?

I can’t tell you. Haven’t tried that yet.

The alternative way, maybe with GoodSync works, does it for you between MacOS and a Qnap NAS, using NFS, now that folders are hidden?

GoodSync has no difficulty copying the hidden files. Works fine with my RipNAS and also with three different external SSDs (that I plug into my Mac when I need them).

I also appreciate letting us know this issue is on your radar and being actively addressed. I never believed there were problems with the integrity of the backups. What I hope is being considered - and it sounds like they are - include two things:

Thanks again for reaching out!

I would like to restore a backup. The RoonBackups has two folders inside RoonBackups\backups. The names are identical, except one begins with a “.”

As far as i can tell, the one with a “.” has a backup from Dec 2017. When i begin the restore process, Roon recognizes the one without the “.” and asks if i want to restore. I appears this is a restore from Oct. 2017

Of course, i need the later version, but i am not sure how to make it work. I hope you can tell me that i am reading too much into this and when i restore, the Dec data will be used… It is hard to press the button without it being super clear since the data is so personal and important.

It is hard to press the button without it being super clear since the data is so personal and important.

that’s something many music lovers with a large library can probably understand very well. If I were in the same situation, I’d certainly have similar thoughts…

Dear all, I went deeper and found that it didn’t matter - that the latest save was reachable by choosing the only folder option.

Thanks for letting us know!

I think we are all working too hard asking ROON to acknowledge this issue let alone solve it.