Tidal finally added all Rammstein albums, unfortunately Roon does not see them, they do not load into the library.

When were they added? It can take up to 48 hours for new additions to Tidal to trickle through to Roon. The same for brand new releases.

They were added to Tidal and Qobuz yesterday. It sometimes takes a while for the services to sync with Roon.

I am sure this has been asked and answered but I can’t find a solution nonetheless.
THE ISSUE:TIDAL sent me a notification that they now featured all of Rammstein’s back catalog. Checking with TIDAL’s web player or iOS app, the albums/tracks are indeed there now. But Roon doesn’t feature them in the artist’s discography. Roon search similarly brings up nothing. The only way to locate the albums is too find a reference in a public playlist. But drilling down that way brings up an incomplete album. Select Tracks are listed as “Unavailable”. Is there a setting I am missing? Is it a licensing issue?
Thanks in advance,
David

When were they added? It can take up to 48 hours for new additions to Tidal to trickle through to Roon. The same for brand new releases.

I think they were released 1 or 2 days ago. I am experiencing the same issue as OP. I will give it a few days to see if the albums and songs become available in Roon.

Rammstein has recently made available their catalog outside of Spotify, so I’ve added them to my Tidal library. When I open the same albums in Roon, most of the songs show as “Unavailable” Is there a reason for this? This is one album, but it’s the same on most albums. Screenshots below . . . 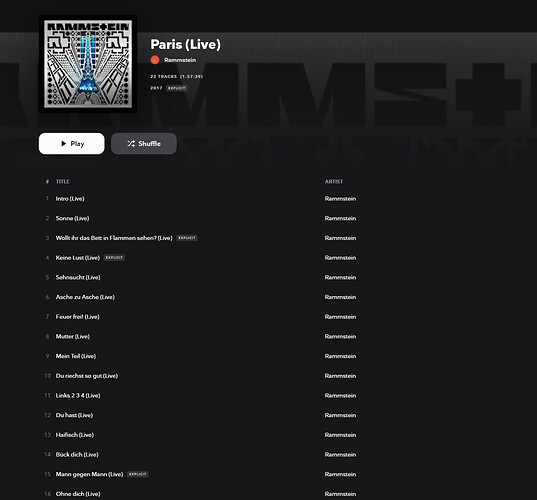 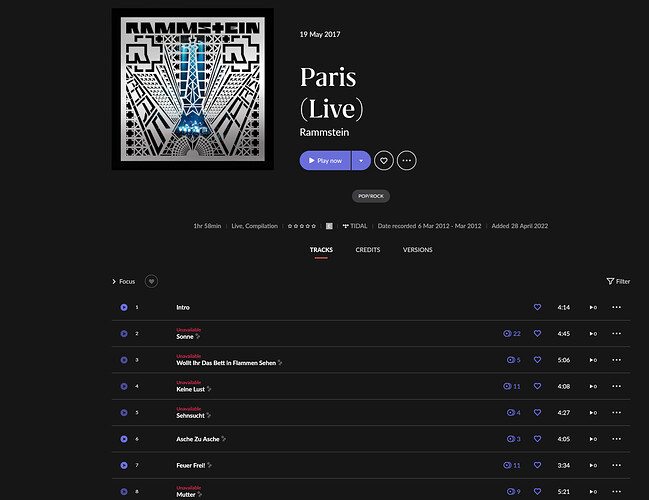 What you are seeing means that TIDAL has told us that the tracks exist, but that we aren’t allow to play them on your behalf. This is almost always due to geographic restrictions and in some cases time-based restrictions. With newly-added content (or changes to restrictions) it can take some time for the changes to make their way to us.

Give it a few days and these should become available.

If the tracks appeared in Tidal, it means that the licensing issues have been settled.

Thank you very much for the assistance. So I can rule out a setting adjustment. Just takes some time to get integrated.

For me it’s working now. Tidal + Roon. Listening to the new “Zeit” album.

Yep, working here also, USA. There are a few EPs and singles that are still showing as unavailable. but most of the others are now working for me.

Qobuz Version of the new album just showed up as well.

I’m starting to get annoyed if it’s some kind of joke.

Roon gets a big minus for this botched Rammstein record.