Roon keeps forgetting my iPad (B667)

Network Details (Including networking gear model/manufacturer and if on WiFi/Ethernet)
Netgear docsys 3.1 cable modem
Eero Wi-Fi mesh system
Nothing on ethernet except an 8 port switch, which has an Apple TV, a Caavo remote and a smart hub for lights and plugs.

Description Of Issue
My primary Roon interface is an iPad Pro.
The Roon Core is resident on an iMac.

From the iPad I will play to my main system via BT (or AirPlay if I ever get that sorted out.) But Roon keeps “not seeing” my iPad.

The iPad is online on the same LAN as the the iMac I’m using as the “Roon Core”. Roon has no issues with that iMac. It also sees all of the other devices on the system when they’re online, like my iPhone, Sonos devices, etc.

When I play music through Roon, it’s not playing anything thru the iPad, even tho it’s the same iPad that I’m using as the Roon interface.

I then go into Settings>Audio on the iPad, and it will show “this tablet” with “enabling” in red font. It seems to want me to “name” the device, even though it already has a name. But I name it anyhow, which then causes the app to crash, then on reopen the iPad is there with the name it had before this little problem.

Hello @dcw96161, have you reinstalled on this device? Did this issue start recently or have you not used this iPad successfully as a remote before?

Thanks for the reply. Here are the facts

There doesn’t appear to be a way to attach a screen shot here, but RIGHT NOW, with the Roon app open on the device, which is where I’m typing this post, the iPad was there before I deleted the app, correctly named. When I reinstalled, it was no where to be found in the screen when I start playing something. Bottom grey bar showed “no device selected.” So I go to the Audio menu. At first iPad not there. Then it’s there listed as “this tablet,” with the enable screen inviting me to name it. Then I exit out, go back in, and it is there with the correct name. If I stop playing music on the iPad and come back to it later, Roon will have “forgotten” the iPad and I have to do the same thing again. This is definitely a first world problem, but I’m trying to determine whether it’s a bug in the system, my setup/configuration or my understanding.

Throughout all of this, ALMOST every other “zone” in the system shows up, including 6 Sonos devices, an iMac (where my Roon Core lives), a BlueSound Node, and the ever mysterious “system output.” (Ever mysterious to me because I haven’t gotten around to figuring out what that is or its role. I’m sure it’s important, but I just haven’t read up on it yet.)

Oddly, while I’m doing this on an iPad, I am listening to Roon music on my iPhone simultaneously. The Roon app on the iPhone shows all the other devices EXCEPT the iPad, and the iPad shows everything EXCEPT the iPhone.

So I guess it’s an iOS issue?

Logic would suggest (to me) that every instance of the Roon app would get its data and current operating state from the Roon Core installation on the centralized Roon Core on the iMac, and thus all show the same state of current affairs. But that’s only my personal logic. That’s how Sonos works; there’s only one Sonos system, so if I’m playing Bach in Zone 1, every instance of the Sonos app in the system will reflect that. My iMac, Apple TV, iPhone, etc, will all show that Bach is now playing in Zone 1.

Hi, I’ve adjusted your account’s “trust level” so you should be ok to post images now.

Oddly, while I’m doing this on an iPad, I am listening to Roon music on my iPhone simultaneously. The Roon app on the iPhone shows all the other devices EXCEPT the iPad, and the iPad shows everything EXCEPT the iPhone.

If you go the device setup for these zones, I’ll bet you’ll see them configured as private zones. Turn off the private zone setting for both devices and they should see each other. 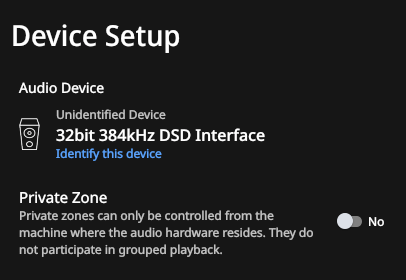 Throughout all of this, ALMOST every other “zone” in the system shows up, including 6 Sonos devices, an iMac (where my Roon Core lives), a BlueSound Node, and the ever mysterious “system output.”

The “system output” is most likely the default output on your iMac, aka its built-in speakers.

Thank you! I did manage to figure out the private zone issue, but system output remains baffling. Can I set a particular device as the default system output or is that a fixed function of the device where the Roon Core resides?

But my problem that started all of this, that Roon keeps forgetting my iPad persists.

Not relevant to this question

I posted about this a while back and the convo got sidetracked, so maybe the topic got lost.

Roon keeps forgetting my iPad. The iPad is NOT set to private. The iPad is not new, and I have twice uninstalled and reinstalled the app on it. The Roon Core resides on my iMac.

A good example happened just a few minutes ago. I have music playing thru an iPad/AirPlay to an AppleTV. The phone rang, so because I was sitting at my computer, I paused the music using the Roon app on my iMac. When I got off the phone less than 5 minutes later the iPad and the music I was playing were no longer visible in Roon on the iMac. When I picked up my iPad it wasn’t there either. The bottom ribbon said “No music playing” or something like that. So I had to back into the playlist I was playing, and restart (really, un-pause because it had stopped where I paused it) the song that was playing. Once I started the music again on the iPad, the iPad reappeared on both itself and on the iMac.

I have music playing thru an iPad/AirPlay to an AppleTV. The phone rang, so because I was sitting at my computer, I paused the music using the Roon app on my iMac. When I got off the phone less than 5 minutes later the iPad and the music I was playing were no longer visible in Roon on the iMac.

Just to make sure I understand you correctly here, you paused the Airplay zone from your iMac and then it remained paused on the iPad?

Hi @dcw96161, I’ve merged your new topic with the existing to keep all the history together.

Roon Core was playing to iPad, which was sending by Airplay to an AppleTV. I used the remote function on the roon app on my Mac to pause the iPad playback. All good. But when I went to restart the music, the iPad was gone from BOTH remotes. No iPad showing up in the Roon remote on the iPad, and no iPad showing in the Roon remote on the Mac. Like the device had been removed from the system completely. It does this all the time. But ONLY with my iPad and my iPhone. None of the other endpoints in my Roon system do this. I have attached a screenshot of the Settings Audio screen. The items you see there are ALWAYS there. The iPad is ONLY there when it is ACTIVELY playing, whether the iPad is turned on and has Roon open or not.

Thus, when I am playing music thru the iPad it is there. When I paused it, it disappeared. 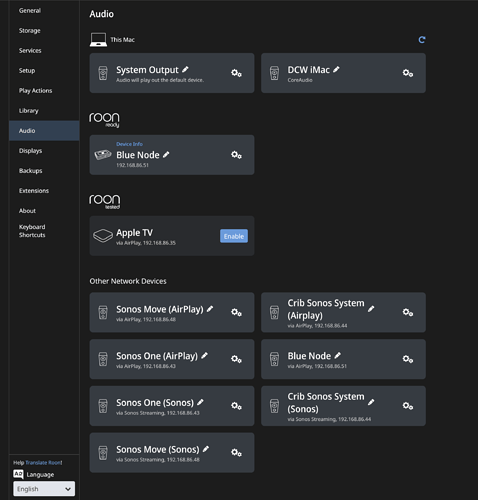 Thank you for clarifying those details!

Can you please let me know the exact local time + date you notice this issue occur? I would like to enable diagnostics mode for your account and see if logs contain further clues, thanks!

Okay. I’ll spend some time with it later this afternoon to replicate the error.

I’ll have to remember who called me though so I can replicate the exact circumstance.

A post was split to a new topic: Roon keeps forgetting my iPhone 12 (B667)

Haven’t given up and want to keep this topic alive. But the behavior has morphed from regular to sporadic. The issue seems to be that pausing iOS devices causes them to disappear from the audio device list. It happened about an hour ago. Listening on iPhone. Working on my iPad. When I paused the iPhone it disappeared from my the list visible on iPad. When I push play, they’re back. It is NOT the privacy setting as I have already sorted that out.

I suppose I could try to do a screen video (if I knew how) but I’d probably record for 10 minutes, use up 300mb of data and not get the error again. Then sometime tomorrow…

Thanks for providing those timestamps @dcw96161, I’ve enabled diagnostics mode for your account and what this action does is automatically upload a log set next time the Roon is open on your remotes. Can you please use the iPhone and iPad remote sometime in the next few days so that this report gets delivered?

Thanks and ok. Should I continue to correspond with you here, or should we take this offline by email or something else?

And, BTW, this morning, at 6:34 am (Pacific), I revved up Roon on my iPhone and all zones showed up except the iPhone that I was using and had in my hand. Even the iPad that wasn’t doing anything but was turned on and sitting on the table nearby. So it did not recognize the zone that I was using as a remote to access Core. Shifted over to my iPad just for remote control purposes, and then the iPhone showed up over on the iPad, but not until I went over to Settings>Audio, where the iPhone appeared as a device, but needed to be enabled, and the name had a blank space for me to fill in. I just clicked on the “enable” button and it automatically filled in the name that Ive already given it, and then appeared as a device in the list. Back over to the iPad, and iPhone was now there.

Trying to identify replicable patterns for you. I keep coming back to the subject title I gave in my original post. Roon keeps forgetting iOs devices. It will “re-remember” them again once I go through the Settings>Audio drill but that seems to be required.

I may be mistaken, but this appears to be normal behavior related to iOS sleeping. On my iPad and iPhone, each will only show up as an end point in the other device when both are awake. As soon as one sleeps it disappears from the other. Waking both devices makes both show up in the other again. If I’m misunderstanding your issue, please disregard.