Roon on M1 Mac mini - Keeps skipping tracks in local library and from Tidal - Every day, every session!

Have been on Roon for 3 weeks or more now.

Music files are on a 4TB Passport drive, and a 4TB Samsung SSD. Haven’t had a single session without - “Audio file loading slowly” error on tracks from all three sources - both hard drives and Tidal. Not to mention that it always skips the track to and doesn’t even recover to the same track!

(In contrast the Mac music app plus Audirvana has not skipped a single track from the same library, nor has Tidal ever had problems on Audirvana.)

Seems to me that the first job of a music player is to play the damn music. I have a high performance M1 Mac mini. My 200 Mbps internet connection should be enough to do whatever networking stuff Roon needs to do. I don’t need unlimited scroll backs to everywhere I have been in my library nor unlimited focus features, if I can’t listen to the damn music!

I don’t understand why a track that is 10mb or even 40mb for a 24/192 recording should skip. Why can’t you just load it first and play from memory? Why does Roon take 6-8 GB of memory? And why do you skip to the next track midway through the previous tracks?

On top of this, the spinning wheel shows up at least a few times every session, I have no idea what Roon is spending time on. You should have some kind of focused mode, where I can turn off unneeded activity and just play music! Don’t mind having restricted features if I can guarantee that I can listen to an hour or more of music sans problems.

How is your Roon Core connected?
If over WiFi that could be your issue as that is not recommended by Roon no matter how good your speed is.
WiFi cannot compare remotely to wired for robustness and bandwidth ability.

My Roon core is the Mac mini. No separate core.

Ok but is it connected via WiFi or wired?

My Mac mini has the Roon Core, Had Drives are directly connected to the Mac mini. USB connection to DAC. Internet connection is via wifi.

That’s exactly what I was trying to ascertain here.
Your Core is connected to the internet via WiFi, that is most likely your issue.

For a test could you try a wired internet connection to see if performance improves?

It might not be convenient or how you want to run it but would be useful information.

Right. Internet connection to the router must be wired.

my M1 core is ethernet connected and had no issues pre upgrade.

I have noticed a few skipped tracks when using radio, also i’ve noticed a track which seems to be playing but with no sound, skip to the next track and sound returns.

If I go back to the skipped track it plays. 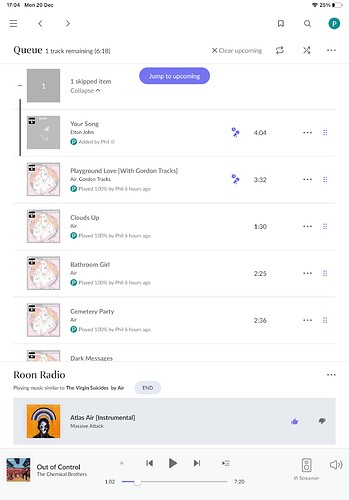 I have had the same issue using Roon Rock on an Intel NUC connected via ethernet to a 1 Gb internet connection. A song will begin and then skip to the next track. I typically have the random order selected. I am using a Devialet Expert also on Ethernet using Roon Air

@Phil_Ryan and @Brian_Walsh2, the OP’s point is that local files are skipping, not Roon radio or streamed files. And, unlike both of you, he’s running his core on wireless rather than ethernet. As such I expect (as several people have already mentioned) that the problem lies with his local network, whereas for both of you it’s more likely WAN related. As such, so as not to confuse things, it might be better to create your own posts so support can offer advice as appropriate.

Exactly the point I was attempting to make to the Op.

Now WiFi connected cores can work for sure even though it’s not Roon recommended method.

I myself have run a Dell win10 laptop WiFi as long as stick to 16/44 maximum.

But it’s still a better idea to connect with wired Ethernet whenever possible.

Title which i read clearly indicates all three.

Title which i read clearly indicates all three.

Yep, indeed, but given the OPs comments the most likely cause is problematic wifi, which is clearly not the issue in your case. If you need support to follow up on your problem you’ll need to create your own post and fill in the requested details.

Sorry mate i didn’t realise you were a moderator on here.

I’m just on the three month trial and won’t renew that will solve the problem, one less customer for you to manage, bye….

I’m not a moderator, I’m just making the point that the OPs problem is quite likely to have a different root cause to yours, so it would make sense for you to open your own support ticket if you need assistance getting it sorted out.

Roon core on mini mac. wire connection to router. Tidal is my service. Roon skips tracks that are stored in playlist. Some tracks can be deleted and re installed in my playlist and works fine after that. Some tracks can still not be playes as they getting skipped after reinstalling them in playlists.
Every track works fine when played directly by Tidal. Roon turns off on my remote computer sometimes when i try reinstalling tracks that are skipped. Roon never turns of at its own otherwise.
I have 2 system outputs on my roon system. 1. is the defult system output. This systemoutput does not want to play lossless. 2. my secound system output is what i use for playing on my hifi rig and are playing lossless.
Can the setup i use with 2 different system outputs play a role in this super annoying ploblem i have with track skipping in Roon??
I have tried rescanning files in storage, but cant find any good reason for this happenings.

well and another happening also accure once a while lately. When trying to reinstall tracks getting skipped, roon just turns off on my computer. The computer that runs the remote, not the macmini that runs the core. and i will just metion that my macmini is just used for the roon core, not used as anything else… just updating itself now and then.

I guess what I don’t understand is what the wifi connection has to do with local files on a local hard drive being played by Roon installed on the Mac Mini.

What does Roon do with the internet that it affects the performance? And why cannot it be stopped from doing so?

I can sort of understand Tidal problems, (not really, Tidal app, website, and Tidal through Audirvana never has these these problems!).

Roon is doing a lot of communication back to the Core even for local files.

Were you able to hook up an Ethernet hard cable to just test the theory?

Need a very long Ethernet cable. Router is in a different room! Will try a pair of Netgear Ethernet over power line to see if it that helps.

My core rant is that I don’t understand what else Roon is doing while playing music.

Activity like indexing music, metadata look up…. is all extraneous activity. The Roon audio transport is also local as far as I can understand.

Why can’t there be a pure audio listening mode that focuses on playing music and nothing else?

Audirvana offers to even shut down Spotlight and other Mac activity so it can focus on playing music.