Ever since updating to Roon 1.7 I have noticed a huge issue/inconvenience with Roon Radio. When I select an artist and click Roon Radio from the drop down menu, music will begin to play and very randomly will cut out for a few seconds, skip, or simply stop playing. I have restarted Roon and the computer it is on (Mac Mini) multiple times and have had the issue happen time and time again. Sometimes it will go an hour or two and then it will start to behave oddly. Other times it will play a song for 12-30 seconds and cut out. It seems to be happening when Roon is pulling songs from Tidal. Any advice or help will be greatly appreciated! I’m beginning to regret spending $500 bucks!!

It is also cutting out playing music from my personal library. I conducted a test and after about 15 minutes, music stopped playing, was shown as still playing in Roon, then at the bottom of the screen said “No Device Selected” to then show the song that was playing paused. This has never happened before until 1.7 came along…

Have you noticed that this occurs with some content more than others or does it not seem to matter what’s playing?

Is this happening for all endpoints?

I am using a 2014 Mac Mini running macOS Catalina (10.15.2), running Roon 1.7 (build 511). The Mac Mini is hooked directly (via ethernet cable) into a Verizon FiOS Quantum Gateway router which delivers gig speed internet. I ran a router speed test and it is operating perfectly. The wifi is turned off on the Mac Mini. The Mac Mini is hooked into a Bryston BDA-1 DAC via a Dragonfly Evergreen USB cable. My library is a small one compared to some Roon users with about 25,000 files that are locally stored on the Mac Mini and then back-up to a Time Capsule. I have Roon being backed up to a external hard drive that is hooked into the Mini via USB. I use Tidal for a streaming service.

I have noticed that this skipping/cutting out is happening on all types of content. Whether it is locally stored or being streamed from Tidal nothing is safe from this skipping/stopping issue. For example I have been listening to Phish for the past half hour (which I have locally stored but Roon is also pulling from Tidal) and it has been skipping on just about every song. After 5 songs it has decided to just stop playing all together.

Let me know what else you need! Below is a screen shot of the signal path. 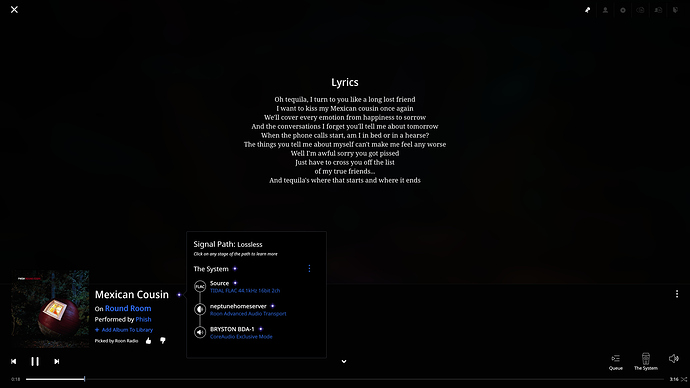 I’ve had a similar issue since updating to Roon 1.7 and I use Tidal. Roon Radio will skip, cut out or stop playing music from Tidal all together. I just posted regarding it.

More likely is the network issue. Just try the Qobuz app and see if you have the same issue,

Thanks for sharing that additional information. I have merged your two posts to keep all the relevant information in this one thread.

In your screenshot above, I am noticing that you are playing out to the Bryston zone. Can you please confirm if you also experience this behavior on other zones, such as the Mac Mini “System Output” zone? Also, does the TIDAL native app work as expected?

I do not have the system output zone configured but can try it for you guys. As for the Tidal native app, I don’t run the Tidal desktop app on the Mac Mini since I control it from the Roon App on my iPad, MacBook, or iMac.

I’ll let you know how things shake out using the system output zone.

Sorry for a bit of a delay getting back to you. Using the system output zone I noticed less of the issue but it still existed. Have you seen other users having a similar issue? Any recommendations?

Using the system output zone I noticed less of the issue but it still existed.

Can you please try to reproduce this behavior on “System Output” and let me know the exact local time + date + track when you experience the next problematic behavior? I would like to take a look at diagnostics to see if we can get more information from them and I can activate this mode once I have timestamp + track info.

Hi @noris,
Attached is when the music cut out, and what song was playing. Sorry for a delay. Hadn’t been streaming lately.

I also have a video of me trying to get roon going on the iOS app and how it would cut out, then skip to a new song and then not play at all but the video format isn’t accepted on the forum. Is there an email I can send/share it to?

Maybe that shareable link will work.

Also the native Tidal app does not cut out like it does in Roon.

Thanks for sharing that video, I can confirm it worked properly. I’m looking at the video and I see you outputted to a zone called “The System”, is this your Bryston BDA zone?

Not sure if you noticed with the video how it skipped a song before playing properly? I’ve had that issue a few times where I will select a song, it’ll buffer and Roon will skip to the next track or skip again before playing a song. I am listening and streaming now using system output trying to replicate the issue. I’ll report back. Thanks.

After an hour and a half of streaming using the system output function I had no issues. I also the streamed for about an hour and a half using my systems DAC with no issues. I tried the same songs where I have had issues and tried different content as well. I’m very puzzled because the other day I went to stream music it was stopping what seemed like to be every other song. I had company over and they noticed how the music would stop. Of course now it’s working fine. Maybe it’s a system issue or internet issue? I find that perplexing as well but I guess it could virtually be anything.

Intermittent issues such as the one you mention here can be tricky to narrow down, it’s possible that you had a temporary internet issue but it’s hard to say for sure.

We have sometimes found that changing DNS servers from ISP-provided ones to Cloudflare or Quad9 helps with general network stability, if you wish you can make this change in your router and see if it prevents issues such as this one from re-occurring.

After all the issues I had, my computer’s hard drive failed… Guess what the problem with Roon was? Nothing of Roon’s doing, it was the hard drive beginning its slow demise (thankfully had a backup of everything). I have since switched out a solid state drive in my Mac Mini which as made it an absolute monster with speed and performance is truly incredible. Roon has been exceptionally stable and working to the standards of a software costing $500+!

Thanks for your help over those few, frustrating months.
Cheers,
Doug

Thanks for the update here! Yes, failing hard drives are often tricky to troubleshoot as they sometimes exhibit issues while at other times work as expected.

In any case, glad to hear that you’re up and running again with the new SSD and that it’s working out great for you! If you have further difficulties with Roon, just let us know and we can take a look!