Roon Radio repeats, this has been an issue for a LONG time [Ticket In]

I see this complaint from more than me. I’ve complained about it in the past. Roon Radio will routinely start to repeat a series of songs it played an hour or 2 previously. This has been happening to multiple people for quite a while. Roon has to be aware of it so they should fix it.

I can see the complications in picking a next song that fits with the previous ones, but it really is a simple matter to program it to not repeat something.

The ONLY reason I stick with Roon is the radio function. If it can’t be fixed I am out of here

and I do not have radio limited to my library

2 weeks and no reply from support… very sad 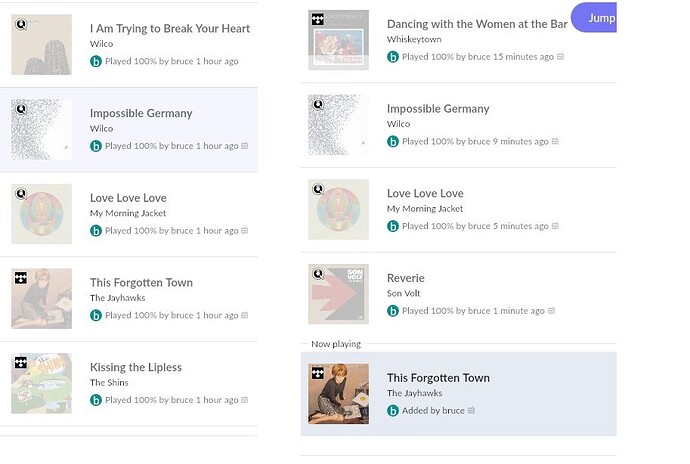 Thank you for getting in touch with us about this. And thanks especially for the screenshots Bruce, these are very helpful. Jam, if you could also take a few screen shots and send them to me that would be great.

We’ve seen a few anecdotal reports of this but haven’t had much in the way of details to work with. So this is very helpful. We have measures in place to keep this from happening but there seem to be some cases of repeated tracks that slip through the cracks.

We’ll look in to this and update you when we know more. Thanks again!

still doing it… hard to believe you can’t fix this. Starting with Diana Krall I could rattle off a hundred different songs that are in the same vein but Roon can’t go an hour without repeating… sad 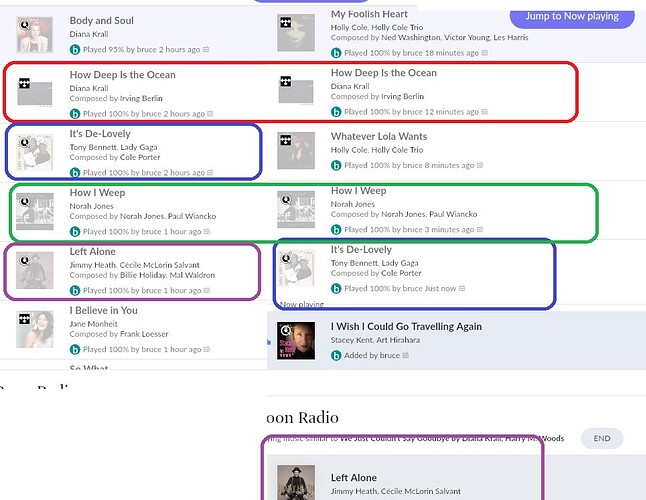 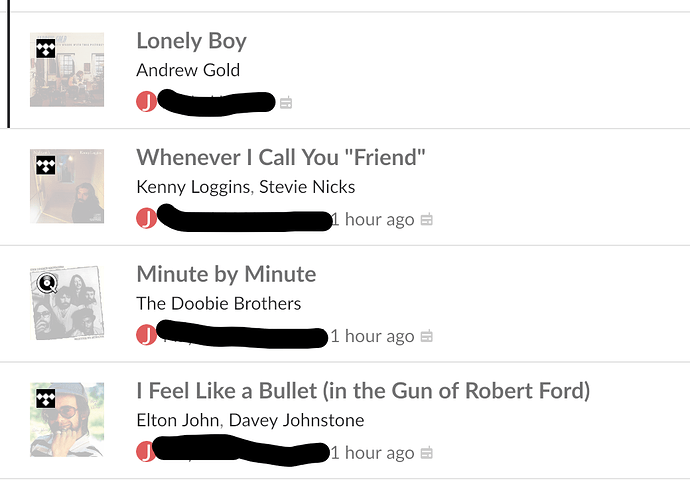 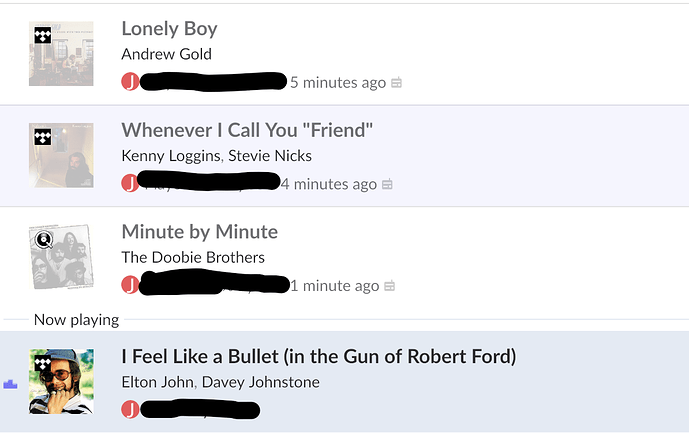 started with “Head in a Vise” by El Madno 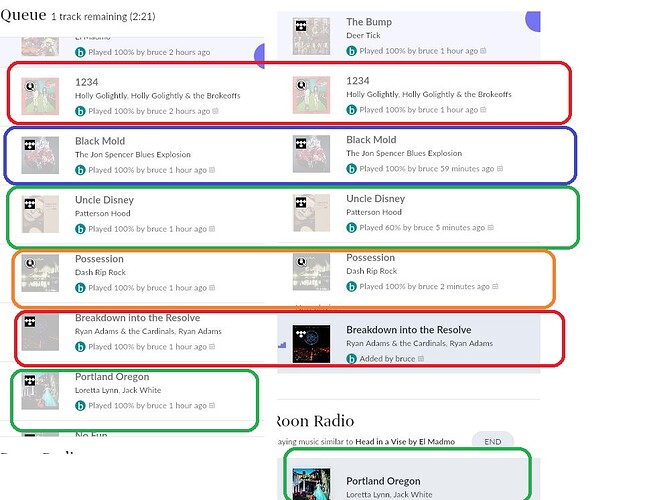 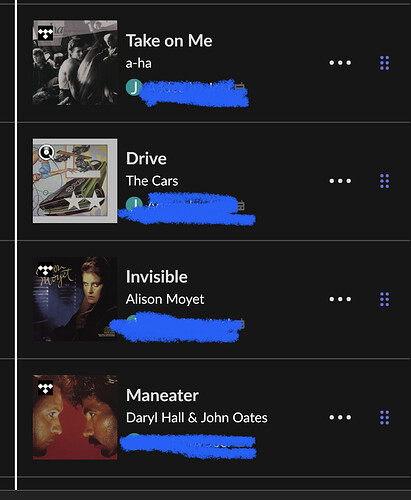 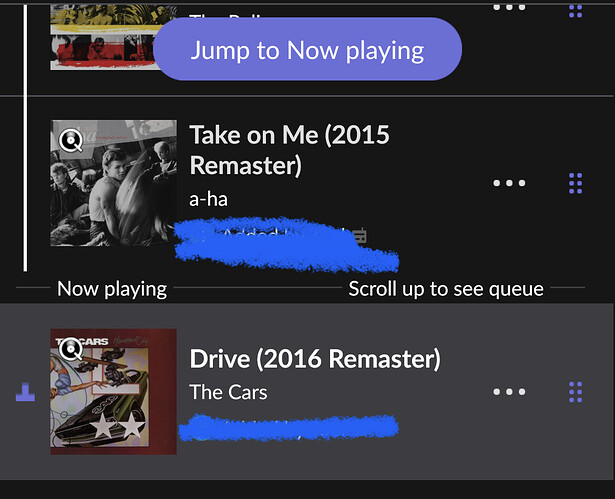 I noticed this problem when I started my Tidal subscription beginning of last December. When I searched for and played the single Castles by Freya Ridings, the next song has always been the same German song. I just tried again (and again, and again, as I have done many times), it’s still Déjà vu all over again. 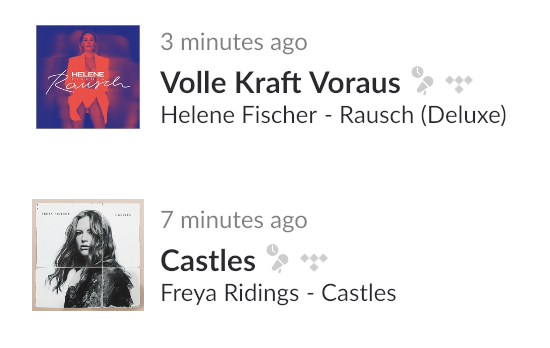 Above is just an example. It’s the same problem happening to me with any other song and artist.

Thank you all for the additional reports.

We’re investigating this, I’ll be back in touch when I have more details to share.

Thank you for following up on this, jamie.

I brought this up over a month ago after I and others have brought it up multiple times in the past. My renewal is in 9 days so I’m hoping it is resolved by then or I am outa here. I can use Tidal or Qobuz or Apple Music to generate radio stations that don’t repeat and repeat and repeat like Roon does.

We appreciate you sharing the behavior you’ve seen from Roon Radio and for expressing how much you value this feature. Like you, we want Roon Radio to be the best that it can be and we understand how getting a series of repeats can negatively impact your listening enjoyment.

The good news is I can tell you the team has actively investigating this issue over the last few weeks, and we are hoping to make improvements here soon. That being said, I want to be transparent and say that I can’t promise that this work will be completed by the time your subscription is up for renewal. The development team have a battery of things they’re working on. Some are fixes that have been in the pipeline for a while and some are awesome new features that have been in development for some time.

I want you to know that we hear you, acknowledge what you’re experiencing, and that we’re on the case. I hope that you’ll stick out your subscription because there are a lot of things in the works that we don’t want you to miss out on. We appreciate your understanding, thanks!

Sorry, your excuse doesn’t fly… the worst programmer in the world could create an array to keep track of what has played and not repeat. In fact, your program DOES keep a list of what has played. All it would take is a simple look at the list and not allow it to play it again. I can’t think of a whole lot of code that would be simpler to write. The fact that this has been an ongoing complaint from many users and would be so simple to fix shows me you have no intention of fixing it… see ya

Roon Radio repetition and the limited selection of artists and albums has been an issue as long as I have been a Roon user (2016). Whilst the Valence implementation improved matters somewhat it has still been an issue repeatedly complained about in numerous threads. In my experience, even if it doesn’t repeat a track it will choose a track from the same album/artist relatively quickly.
Not a great experience in any case but made far worse if it selects an artist you don’t care for then plays three of their tracks within 30 minutes.

If you’re committed to not believing me/us I’m not sure what I can do to compel you otherwise. I can assure you that the issue is being actively addressed. There are safeguards, similar to the ones you mention, in place, actually. But there seems to be some behavior anomalies where they don’t function quite as they should. Radio enters into a brief repeat loop, then finds its way out after the cycle.

As I said, it’s being investigated and fixes are being built. We’d hate to see you go over this one issue, especially when improvements are on the way.

It is not that we don’t believe you Jamie just that this has been a problem for so long now and given the vast range of artists to choose from, the behaviour seems somewhat inexplicable. Don’t think I have ever listened to it long enough to find its own way out before hitting stop.

My apologies there @Anthony_Bates, my initial sentence was directed to Bruce who felt my response was more of an excuse than an explanation. In any case, we understand your frustration.

We’ve been collecting data on this to drill down into Radio behavior to determine why this is happening. Some users experience this frequently, others see it occur very rarely. We’re perplexed, but we’re addressing it.