N/A; makes no difference which endpoint I play to.

Roon Radio is doing a terrible job of facilitating song discovery. For any given seed song, it appears to select about twenty other tracks and just repeatedly shuffles through them when there should be hundreds if not thousands of tracks that would be appropriate. I am a Qobuz subscriber, seeding Roon Radio playback from a Qobuz track. The tracks that it has selected are appropriate matches for the seed track. But holy moly it is getting repetitious… 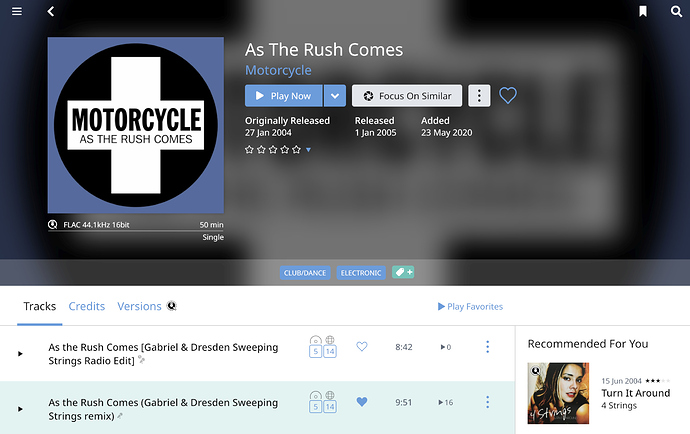 Roon radio has been reported before as being pretty rubbish when it comes to EDM (progressive trance in this instance)
The radio gets a number of inputs, but a big one is “what did other people play” and I don’t think a lot of people play this compared to rock/pop/jazz etc so the pathways aren’t there.
The users in this thread may have opinions

Let’s share our common love for electronic/house/techno/IDM… So many genres to cover but keep 'em coming! Starting off with Jon Hopkins. Can’t wait to see him live when he visits Stockholm in October. [image]

My tastes are more roon mainstream so radio works well for me most of the time.

Can you share some screenshots of the queue showing the repeats you’re seeing? I’ll be sure to get this feedback along to the team.

I did some greping of the roon server logs and created https://drive.google.com/file/d/12ZBNu7Il98sqvzsSokb2gS0JCUxcctC2/view?usp=sharing – hopefully its digestable. I removed all the albums where I played an album straight through, so it should mostly be Roon Radio at affect here.

That’s across all the logs on my Roon Server at this time, back to 5/28. Tracks from 4 Strings, Delerium, Dash Berlin and others get repeated a LOT by Roon Radio. Basically, look for “As the Rush Comes” as the start of a run, and then you can see what all it selected going forward. I had to re-seed multiple times, across multiple zones, because of either 1) I had played a full album, or 2) Roon Radio had simply stopped on its own (without giving a playback error) and had to be restarted.

(Please let me know when you’ve retrieved the file so I can delete it from Google Drive. Thanks.)

I’ve passed this feedback along to the team.