I have need for a portable device. I wish to keep my phone as a phone and the lotoo mk5000 I use has no wifi. After 5 years I still loathe the interface. It sounds really amazing so . . . I endure.

I would like:
light in weight
future support and a good value is appreciated.

I’m not setting a budget as this may become a primary listening station for me.

AFAIK the only Roon Ready DAPs are the more recent Astell & Kern models and ARC isn’t available for them.
I read in another thread ARC support may be forthcoming.

This seems like a good place for people to share their experiences of using Roon 2.0 and Arc on DAPs. The devs have asked for feedback….!

Maybe people can post their experiences of DAP usage here and the OP will get the feedback he requires to choose his DAP!

I’m going to kick off with iBasso DX240, a fantastic sounding DAP with good Wi-Fi and Android 9, and native support of hi-res, so should be compatible with Arc and Roon 2.0.

The DAP sounds much clearer and more spacious than my other headphone rig (RPi and Allo Boss to Schiit Valhalla), and it has taken top spot for late night headphone listening. The problem I have always had with it is slightly converse to what other people struggle with with Roon over Android. The DAP reports to Roon the default output is 192/24 so my ROCK core coverts all music to this very high sample rate before RAAT streaming. Surprisingly (and I believe to keep things simple for Android users) there is no way to adjust this. My home network just cannot support this bandwidth so the songs always skip/crash/report as loading slowly after a bit. Essentially, Roon is unable to run on this DAP.

So I was quite excited to see how Arc might work. This does things slightly differently. The music is streamed in its original format (or can be downsampled to CD format or lower before it is streamed) so bandwidth is less of an issue. Once the signal arrives to the DAP I believe it is upsampled by the Arc software to 192/24, as reported by the DAC to Arc. At least, that’s what the signal path says. I was hopeful therefore I could actually use Arc in the home situation to use my DAP to play my Roon library……

Alas it was not to be….after a successful install of Arc on the DAP, I attempted to download some local files, which worked until I tried to play them -“playback error”. I then tried playing other music on my core and Qobuz. I got through about 10 secs of a song before Arc crashed. After that, every time I try to play a song Arc crashes.

So, no the iBasso DX240 is not ready for Arc yet. And incredibly annoyingly, it remains useless for Roon. Now, if Arc actually worked on this Android 9 DAP or there was some way to prevent the core up sampling to 192 when using Roon Remote, that would be handy…. And surely this can’t be difficult to implement….?!

UPDATE: persevered with Arc - updated the App, restarted my core, reset Arc. Now it seems to be working great. Not tried downloading anything yet. Currently streaming a 44.1/24 track, which then gets upsampled on the DAP to 192/24. Sounds really good. Finally a way to use Roon on my DAP. Delighted!

I’m using a Hiby New R6 which is capable of PCM384 and DSD256.
Except with Roon.
I can use Roon Remote and ARC but I’m limited to 16/44.
As Roon is using Android Audio I would have thought I’d at least be able to upsample to 24/48 but upsampling has no effect.
Unless I enable crossfeed then I get 24/44 (I think)

No DSP on Android DAP Support

Thanks for the replies. “No DSP” was a bit of a misnomer. Parametric EQ and crossfeed work. Sample rate conversion does not. However I’ve noticed that enabling crossfeed or Parametric EQ appears to cause upsampling to 24 bit

I gave up on the DAP for Roon and got an Ifi iDSD Gryphon for my iPhone and it sounds remarkable albeit a bit bulky and far less storage capacity.

From what I saw on other forums unwanted resampling is a common problem on Android based DAP but I think it will be solved eventually.

I will be watching to see what evolves on a DAP with Roon. Astell & Kern have a good number of devices listed as Roon Ready (10). I would have to believe some form of regression testing is being done.

I have no clue what coding changes were upstreamed to vendors or when so I am speculating only.

I appreciate you all giving your experiences and thoughts.

It’s got the potential to redirect the decline in DAPs. The sound quality using my AK SR25 with good iems is hard to beat. But interface plus WiFi ability has made phones a better option.

The thought of ARC on my DAP is very exciting tbh

A FiiO representative has quite enthusiastically shared on another platform, that their new M11S should receive Roon certification soon. I sure hope that he did not jump the gun and that it is indeed already being tested by Roon. 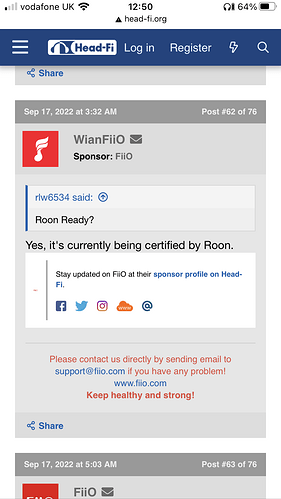 If this happens I’m in.

Same but I’m not going to hold my breath.
I have several FiiO products and they’re mostly great but they have a reputation for promising future updates that never happen.
I do hope this happens.
Onboard DSD upsampling too!

I needed a player so I went with a shanling for now.

From their forums. Looks like Roon is garnering a lot of talk. 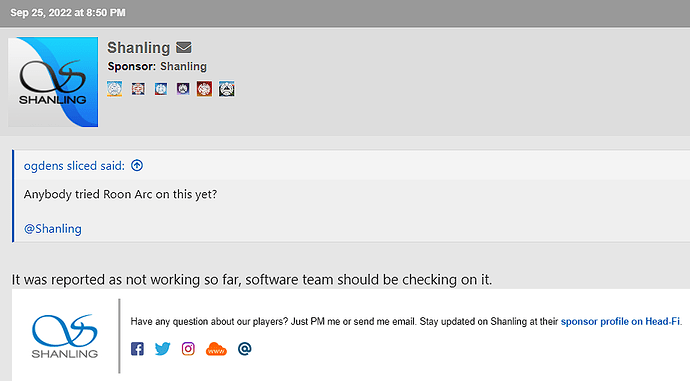 I Download the Android APK but it doesn’t show in my DAP, so please let me know if in this version it should work and in case that it should work thet step to put it to work.

Great topic! I opened a thread about the state of DAP devices under Roon in 2002 Roon ready DAP 2022

Hopefully a moderator will combine the threads as I think a number of us are looking for available/ soon to be available ARC options.

I’ve merged your thread into the existing discussion that @MamaTried referenced, so users can have greater visibility.

It’s only supported on Android 9 or later devices if your using Roon ARC app, the main remote should work on older versions.

After ARC was released, I sold of my beloved FiiO M15 and replaced it with the M11 plus.

I use these DAPs as my main source for music in my car. Essentially a head unit, feeding a digital coaxial signal out to a DSP before going to the amps.

Tethered to a mobile network, ARC has been trouble free. Very satisfied with ARC so far.

I needed a player that didn’t require a computer. So I bought a Shanling M6 Ultra. Quad AKG DAC blah blah blah with Android 10.

Both Roon and ARC load and can be configured, but when I try to load even a 16/44.1K track I get a red pop up with the exclamation stating Internal Player Error.

Every other audio application works as expected.

I’m really hoping this gets resolved.

I have a shanling m3x and roon runs fine on that. Cant instal Arc though as android version not supported.

If i ever upgrade by DAP the M6U will be what i go for. Been very happy with their M3X.

I have an iBasso DX300 running Android 9. ARC installed through PureAPK without issue. The UI seems sluggish to any of the other apps I have installed (Tidal, Qobuz, Amazon Music).

My WiFi network is pretty good for anything I have ever tried to run off it (easily 500mb/s). 4K video streams with zero issue. However, ARC seemed to be struggling just to list the tracks for any album I selected… often timing out on me. Eventually I got an album to load. I then attempted to download this album. It failed quickly the first attempt, but then worked the next second I tapped it.

I then put it in offline mode and was able to listen to the album. Like others mentioned, it seems to playing at 24/192, even though the source track is only 24/48. It sounds fine though.

Also, I’m not sure how to change the storage location to the SD card instead of the internal storage. Was also hoping to have an EQ, but don’t see where to get to that in ARC.

–Correction–
I was literally messing around with all of this while typing this out, double-checking what I was saying, and now wireless-online streaming seems fine, as well as loading album tracks quickly in view.

With that said, I did disable WiFi to run offline and then turned WiFi back on. In that way, it did reset and connect to my WiFi access point. It’s possible, though unlikely, that it was attached to an AP in my house that was further away (I have a mesh network with ~7 APs in my house)… but I haven’t been out of the room I am currently in with an AP 4 feet from the DAP. I also powered it up in this same location and haven’t moved.

Another thought I had: I literally installed ARC, connected to my Core, all within the last 15 mins. So, could it be that Roon ARC is caching things in that first bit?? The app UI also seems to be responding faster all around. Moving between screens, albums, swipes, scrolling… all much more responsive now.

For now, it seems to be working well. Albeit, playing everything at 24/192 for some reason.

If I can figure out how to download music to the SD card and use an EQ, I would run only this on my DAP!!

I was able to get Roon to work on my DAP for 45 minutes last night. Then it crashed and I had to restart the device to get it to run again.

Roon ARC launches. I can browse my library (it has no clue the sd card exists though) I can select an album, even downloaded it. I hit play. It waits. It hits the timeout period and a red box with 1 of 2 errors:
Internal player error
Insufficient bandwidth

I downloaded the album with no issue.
I’m 3 ft from my wifi router.
I have 5 devices on 2.4Ghz and 1 on 5Ghz.
My home is otherwise hardwired and not oversubscribed.