Roon seems to be very greedy with my bandwidth & system resources

I don’t know enough about routers to tell you which would be the best for your use case but, before you make any decisions, I’d definitely recommend hard wiring your core to your existing router to see if it fixes the problems you’ve been experiencing. If it doesn’t, then a new router probably won’t improve things.

@Snowdog
You can have a look here:

Planning to redo my WiFi network at home (and maybe some new router for the cables if recommended). My current router is a Netgear Nighthawk X4S that I’m quite disappointed with. Running an old firmware since the past releases messes up Roon and Airplay. Netgear doesn’t seem to care. I have CAT6 cables to 3-4 locations in the house. My idea is maybe going with one of the better quality mesh network with wires backhaul for best performance. I liked Netgear a lot before but the firmware they r…

Personally, I have had good experiences with Asus routers. They offer a wide range of settings for all kinds of circumstances.

Thanks all. 15m flat Cat-6 should be arriving today, so I’ll be able to hardwire & go from there.

Just wanted to check something, though… Being thick as mince & all that… I think I understood that an ethernet connection to a power line plug that uses the wiring of the house to form a direct connection to my router IS a hardwire connection.

… I think I understood that an ethernet connection to a power line plug that uses the wiring of the house to form a direct connection to my router IS a hardwire connection.

Yes in the sense that WiFi is not used, however, when people speak of a hardwired connection what they really mean is a plain RJ45 Cat cable (or fibre) linking the device directly to the router (or switch) … so no WiFi or Powerline adaptors.

So I can expect an improvement with this new cat-6 cable?

Yes. Probably. The issues you mentioned in you original post point to a networking problem, and the only thing we’ve identified as a potential cause is the power line adapter. If things improve with the erhernet cable, problem solved/issue correctly identified. If there’s no improvement we can start over, having ruled out the most likely cause.

Having connected up the new cable, I started playing without issue.

I decided to continue “as normal” & started to use my computer for other things at the same time, by which I mean torrents & downloads, Dropbox syncing, etc.

Megasync has always been one of those apps that seemed to cause the most problems. Having a built in download manager, it seemed to do that particular job very well & downloaded with scant regard for my system’s limitations. Sure enough, not long after it started, here was a pause in playback. I figure my broadband connection has a finite limitation &, with the best will in the world, even the best connections can’t make that pipe any wider than it is, so I went in & changed the available bandwidth for Mega. Downloads & syncing have continued uninterrupted albeit more slowly but, most importantly, playback has been uninterrupted since.

I’d call that a result.

I only have 4 ports on the back of my router & I’ve had to unplug my smart TVs connector for the moment. If I buy something like this to expand my sockets, will I be creating a new problem?

I’d call that a result.

If I buy something like this to expand my sockets, will I be creating a new problem?

No, adding a switch shouldn’t cause any problems. That said, I’d suggest this one:

It’s only a couple of quid more than the one you linked and it has 8 rather than 5 ports. I have two of these in my setup at home so can vouch for their reliability.

I’d second @DaveN 's recommendation, not only because it has more ports, but because it is an unmanaged switch. The Netgear GS305E is a managed switch (the “E” suffix designates this).

Managed switches have a tendency to cause problems unless you know exactly how to use them. See:

PS - I speak from bitter experience…

For years, I’ve had a cheapo 1 Gbit network switch (a Konig CMP-EHUB52) at the hub of our home network. Whilst the network, and Roon in particular, has been running faultlessly, I thought I’d swap it out for a more modern switch, with simple management features. I bought a TP-Link SG108e, which has had good reviews. I swapped the switches, and immediately Roon started giving lots of problems. Sub-second dropouts and skipping in playback. Sometimes at the end of a track, Roon reported difficulty…

Managed switches have a tendency to cause problems unless you know exactly how to use them.

I didn’t notice that the GS305E was a managed switch. As Geoff mentioned, these are best avoided as a) they’re pretty much unnecessary in a domestic settings, and b) often cause more problems than they solve.

Thanks to both of you.

Oddly enough, there is an unmanaged 5 port one & I only didn’t link to it because I thought “they’re all going to say ‘you’ll be needing a managed one for more control’ so I’ll send that one instead.”

Out of interest, the 308 is also 8 ports & unmanaged & is available through Prime, so I’ll get it tomorrow, whereas the 108 isn’t, so it would be a third party seller & into next week.

Are they effectively the same thing or is there a reason I should go for the 108? 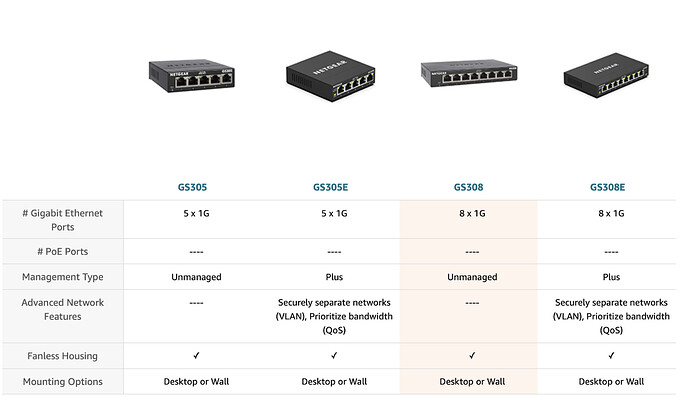 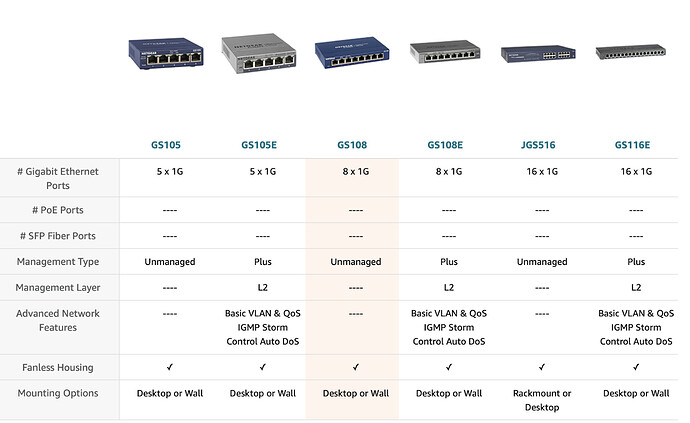 Are they effectively the same thing or is there a reason I should go for the 108?

They’re pretty much the same thing. According to this article the 108 has a better warranty and higher build quality, but there’s really no difference in functionality or immediate performance.

“they’re all going to say ‘you’ll be needing a managed one for more control’ so I’ll send that one instead.”

Definitely not. As you will probably have seen, if you’ve been around the forum for a while, there are two camps when it comes to networking equipment and digital audio - those who understand that networking is a basic and incredibly well understood aspect of digital audio, and those who don’t

Well, as I’ve said before, I am a caveman looking at a spaceship with a lot of this stuff so I’m very grateful there are people who are willing to help me out.

One think I would suggest (if your not short of ports) ) is to only connect the switch your router and then connect all the other devices into the switch.

is to only connect the switch your router and then connect all the other devices into the switch.

Out of interest, what are the benefits?

ISP provided routers are built on budget and somewhat of a jack of all trades device.

I’ve had issues in the past with devices dropping of the LAN that I’ve not seen since I took this approach.

That said, I also switched the ISP’s router (VirginMedia Hub 3) to modem mode, and now use a Cisco/Linksys Router / WiFi Access point these days, which is another factor.

I’d treat my advice as a precautionary suggestion rather than a strong recommendation.

Just a quick update on this.

Having made the previous change of directly connecting my Roon core to the router with a cat-6 cable I have experienced no dropouts since.

On the basis that I needed at least one more ethernet port (because I had to make room the aforementioned new cable so something else had to be unplugged) I went ahead & bought the 108 hub.

It’s now installed & I’ve moved all the ethernet cables over to it.

Everything appears to be working perfectly.

I have two questions:

All of the cables I have are about 400m long so behind the telly looks like a vat of spaghetti made to feed an army. I’m thinking of buying half a dozen 2m cables, just to simplify that & so, cat-5 or cat-6?