@support, I’ve noticed recently that the Roon Server on my ROCK NUC is apparently restarting itself every day at about 06:00. Is it supposed to do this? I don’t recall that this was happening in the beginning. 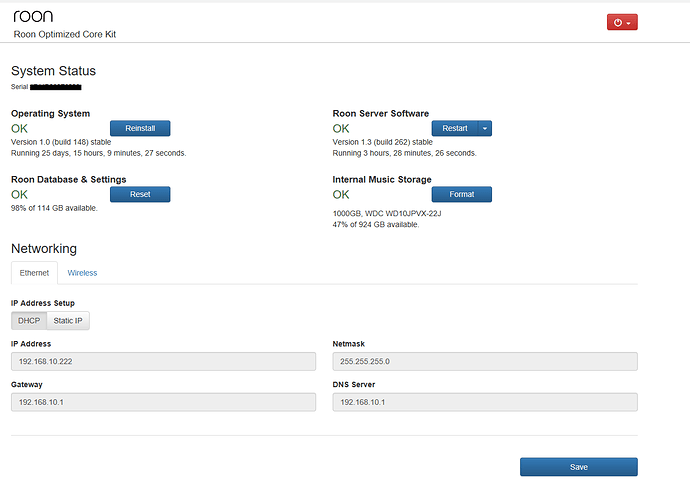 Maybe it’s something in your bios that’s initiating the restart? I don’t think roon has such an option.

But if it was in the BIOS, wouldn’t the ROCK OS also be restarted? As you can see, that just keeps on trucking…

I had a similar issue (except it was every 3 days or so) recently with the previous but one build. After my logs were analysed by support it turned out to be half a dozen or so bad M3U playlists that Roon could not import and kept on retrying. Once I deleted them the restarts stopped. I also updated the Operating System to release 148 at the same time as it had got stuck on the original release version.

@support Hi, since updating to Build 259, as detailed at the end of this thread - https://community.roonlabs.com/t/build-259-has-yet-to-come-to-me-rock-resolved/29971 I seem to be having some stability issues with Roon Server. It keeps restarting itself every 3 days or so. Along with this I am having some audio stopping randomly (mid track for no reason) with Roon freezing issues, usually when playing to a Sonos Connect. By freezing I mean that the playback indicator on the waveform display …

The odd thing was that those playlists had always been there (since ROCK was released back in May) and not caused any trouble until that update. You may have a different issue though.

Thanks, Tony. I don’t have any M3U playlists, but I’ve always had a list of 67 skipped files that Roon Server on ROCK claims are corrupted MP3 files. The bizarre thing is that these very same files cause no problems with Roon Server when it’s running on Windows 10 Pro. There’s something odd about the ROCK OS (or its MP3 codec), methinks…

Hi @Geoff_Coupe ---- Thank you for the feedback and sharing this observation with us.

Can you send us over a set of your ROCK logs and we’ll have a closer a look.

@Eric - will do - just as soon as Microsoft fix OneDrive. It’s bleating “Something went wrong - error code 2” at the moment. Typical - when you need it, it falls over…