@Carlos_Osornio What is operating system is Roon Server running on on your Qnap TVS-871? I see on the company’s product page the device supports multiple different operating systems as virtual machines. Linux distribution? ROCK? Windows (if so which version)?

I am planning to move to a Ubuntu Linux install to see if it helps my situation.

Native Qnap QTS v4.5.2, but has been always the same for previous versions.

@Carlos_Osornio Ah ha, I didn’t notice there was an installer package for Qnap and Synology for download, now I do. Based on Qnap’s website, I see it’s built on Linux. Hopefully I don’t run into the same slow down issues with Ubuntu Linux, if I do I cannot see using Roon long term as I agree with you, 10-20 seconds to start a song is not reasonable.

Roon support alluded to the issue likely having to do with metadata updates that happen in the background.

Sorry to hear about your troubles, though a bit relieved I am not the only one. Good luck to us both!

I hoped this was resolved with v1.8

My first impression of running Roon server on Ubuntu 20.04 is that the memory leak has been resolved or mitigated. I am going to keep an eye on this for the next two weeks or so, but after playing music and using the interface heavily for six hours today, the reported physical memory usage has been stable.

That is good news indeed. Please keep us posted. I should have my Ubuntu install up and running within the next week, I’ll report back here too once my library is settled again and I’ve had the server running for good amount of time.

Please let us know if Roon 1.8 has helped with this issue and we can continue from there, thanks!

As I mentioned, v1.8 didn’t show any improvement. Evidently there is no v1.9 coming in a short term, nor any advice that this issue is being investigated, I am right now doing a test install over a powerful NUC I have for other purposes. It will finish scanning and updating until tomorrow with the 6 cores out of 8 I gave it for this task. Even with this heavy load seems to be very fast and responsive (windows 10, music resides on NAS). If test proves successful, although unnecessary, I prefer to buy a new i7-10 than to deal with the buggy NAS package.

By the way, I tried many times but it was impossible to restore a fresh Qnap backup over windows. The process is made and finishes successfully, but after restarting, nothing is added. If I recall, I think this also happened in v1.7. Is there any cross-platform limitation for restoring a database? Of course I would like to recover all my edits…

I have been running my Ubuntu Linux Core now since February 14th (about 3 weeks) on the same hardware I had my Windows 7 Core install on.

Unfortunately, the slow down has returned with a force. As I am typing this, going from one song to another is taking upwards of 30 seconds for both local files and TIDAL files via Roon Remote on a hardwired Windows 10 PC. As with my Windows 7 install, the slow down gets worse over time. My server uptime at the current moment has been several days (ever since the latest 1.8 update was pushed (1.8 build 764). The core was running great the few days where you pushed one update after another, likely because the Core was getting restarted every few days.

I just restarted the server and search and playback are vastly improved. I really would like to get to point where I don’t have to worry about restarting the Core regularly.

I believe I have counted out the Core operating system as the issue.

In addition to changing the Core Operating System, I also changed routers from a Google Nest router to an ASUS router.

Could we continue troubleshooting?

I just restarted the server and search and playback are vastly improved.

Same here on Ubuntu 20.04. But, others report the same issue on Windows and Mac OS. The apparent memory leak has been reported by me and others many times. It’s a nuisance, but for the moment being the only remedy is restarting Roon Server every couple of days. On Linux this can be easily automated using cron.

Edit: Three weeks ago, I initially had the impression that 1.8 had somehow mitigated this issue, but that is not the case. Depending on interaction with Roon, every 3-5 days the server must be restarted to keep the system responsive and usable.

What I find most perplexing is there aren’t thousands of others reporting similar symptoms. Why does it affect us, and not the greater community?

@support alluded that it may be do to metadata updates. My library local library is 110,000+ tracks which is probably larger than the average Roon user but I know there are other users that make my library look small in comparison. And @Carlos_Osornio reported about it occurs even when he has 10,000 tracks.

Support had me turn off my local library for testing keeping only the TIDAL integration during our initial dialog (before I moved from Windows 7 to Ubuntu). I ran that way for over a week’s time and Roon was lightning fast in that setup and never slowed down. This leads me to believe that those users with no, or very small, local libraries never run into the slow down issue. Perhaps the vast majority of Roon users have small libraries?

I come from a Foobar2000 setup (using Facets for browsing) that I’ve used for over a decade which had me spoiled with lightning fast access to my library. As fast as I could type, results were there and the only pause I ever experienced with trying to play a file was when my spinning disk hard drive needed to spin up after not being used for a lengthy period of time. I would go months at a time never restarting the computer or Foobar2000. If I could just get a fraction of the speed of Foobar2000 in Roon I would a really happy camper.

This leads me to believe that those users with no, or very small, local libraries never run into the slow down issue.

My library is about 170.000 tracks total, of which less than 60.000 are local. I notice that memory consumption goes up much faster when doing lots of interaction with the system - browsing composers, artists, albums and, above all, saving many new (Tidal) albums in my library. Thing is, once memory usage has gone steeply up, it doesn’t return to the previous reading and the point of unusable slowdown is reached much earlier.

Well, I do like poking around Artists, Albums, Versions, Discovery… it’s a lot of fun.

Can you please share a screenshot of the size of your Database Location/Database folder and your Database/Core folder? (Right Click → Properties), for example from my end: 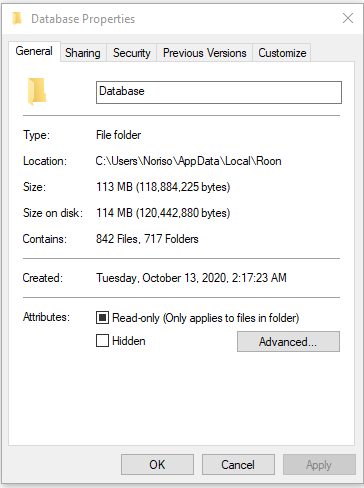 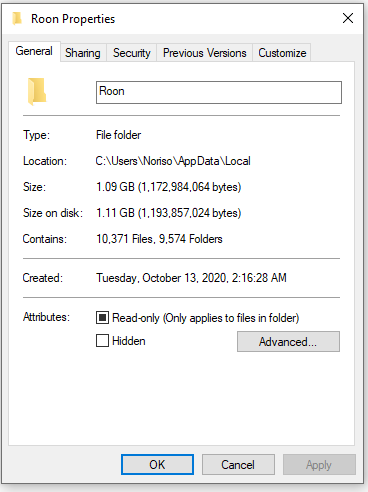 @Bryan_Nieman is on Ubuntu Linux now… 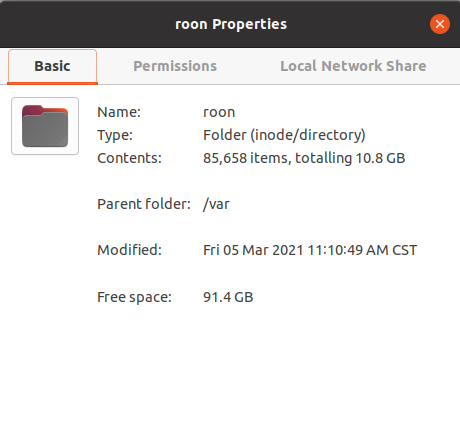 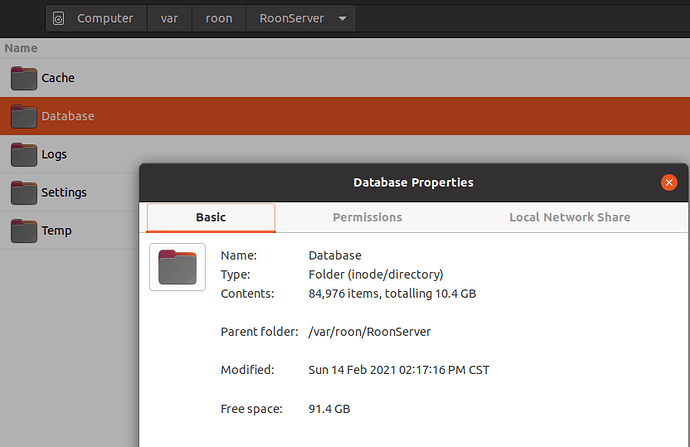 It may also be worth noting, I started from scratch with the Roon when I did the Ubuntu install (after Windows 7) just in case it was something to do with my database. Obviously my library files are the same, but the database was rebuilt from the ground up.

Hello, I have my core on Synology NAS 718+ and after Roon was updated from 1.7 to 1.8 - for some time it was very fast, definitely faster than when on version 1.7 but aftersome time I have noticed that version 1.8 become much slower than 1.7 i.e. it takes longer to connect any of the Clients to the Core and it takes now longer to play song or to do anything else on it actually.

No evidence of memory leaks/slowdown over the last year.

Thanks for the feedback Fernando and I am glad to hear you haven’t had any slowdowns. How much space does your Roon Database take up? Mine is taking up 10.4GB of disk space and @noris 's example is 114MB.

FWIW, I have noticed that when using Roon mainly for music playing, with only the occasional new album being saved into the database, the memory usage maintains itself quite stable. It increases along the day with Roon usage, and goes back down during the night.