Roon stops playing after 20 minutes or so, sometimes more fequently

I notice there are a number of older posts regarding Roon stopping in the middle of playing tracks. That is what is happening, but I am using a more current build. Most of those problems listed are from earlier builds. So I am not sure if in fact this issue has been resolved in teh current build or still exists. Maybe there is a setting I should change?

After about 20 minutes or so Roon stops. It is sporadic and unpredictable. I do not believe this is an issue of one of the devices going to sleep. This seems pretty random to me. Sometimes it plays for a few hours, other times it stops repetitively.

Thoughts as to why and fixes?

I’m going to move this to the “Support” area and flag @support.

Meanwhile, you might want to have a look here to see the info the support folks are likely to want.

Hi @Daniel_Greenberg ---- Thank you for the report and sharing your feedback with us, the feedback is very appreciated!

Moving forward, to help us better understand what could be causing this behavior with your setup may I very kindly ask you to please provide the following information:

BTW: I got some emails from Google that said the Community I wrote to was not valid. Tried to reply to David Orgel who said he moved my post to a more appropriate section of Support.

I believe there are multiple issues, and it might have to be resolved in different places. Buyt lets try to solve this “track stopped playing” first. I anticipate that all of the issues cannot be resolved in this post.

I have to take a little time to provide more details about the setup. And I will.

No, different content stops periodically. Not the same file, track or album. Seem to not be affected by what is playing, just that it stops. Random tracks. Sometimes it stops while playing an album, and sometimes when playing Radio.

Content is playing from MacMini via external USB drive . Internal drive on MacMini is not large enough to store the files. As a general rule, any space intensive applications are run via the external hard drive. Very little installed directly on MacMini HD. Generally it works well. That is how I have set it up and been that way for several years. Periodically I run Disk Utility First Aid on both internal and external drives/partitions.

There should be about 22,000 tracks and Roon is showing a lot of duplicate albums. So the actual track count shown in Overview is much higher. See attached. This has existed for some time. I have spent hours trying to use the editing tools to combine albums. Pretty much useless so far. Either the tracks do not line up or the album is not being identified, despite attempting to re-identify album. Many of the tracks do not play so I have to go to a different version of the album. And some albums do not play at all no matter which version I use.

So I might have 3 or 4 versions of the same album, some with different tracks and order than original. The problem is that Roon is watching several iTunes databases and is duplicating tracks. Maybe that is another problem, but I cannot help but think there is something wrong with the way Roon imports the tracks from iTunes databases. 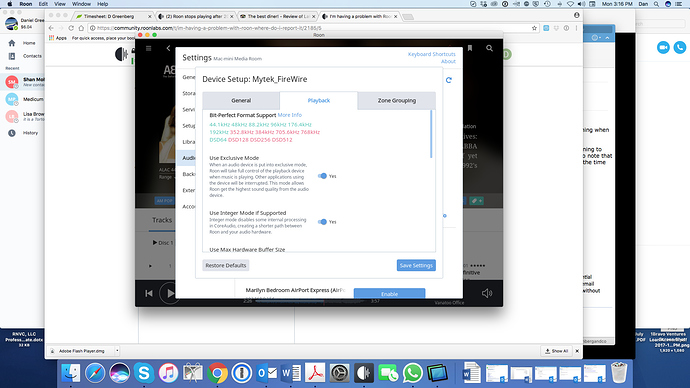 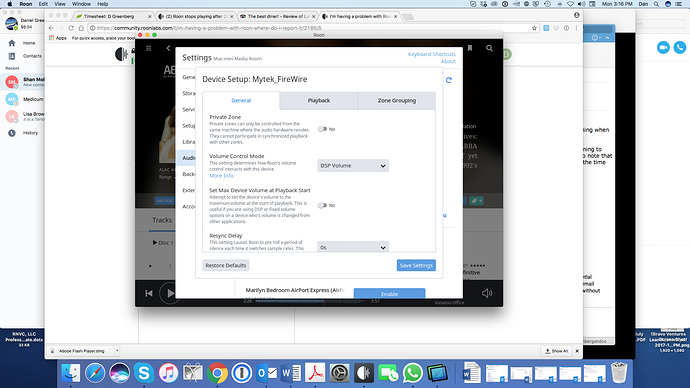 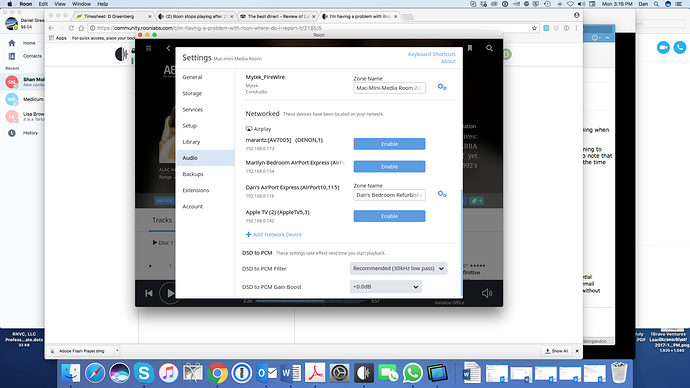 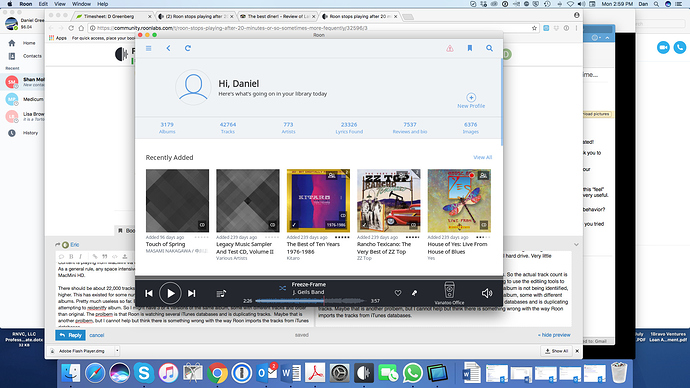 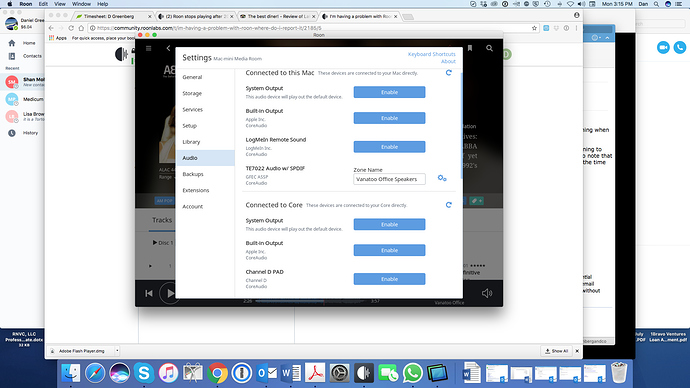 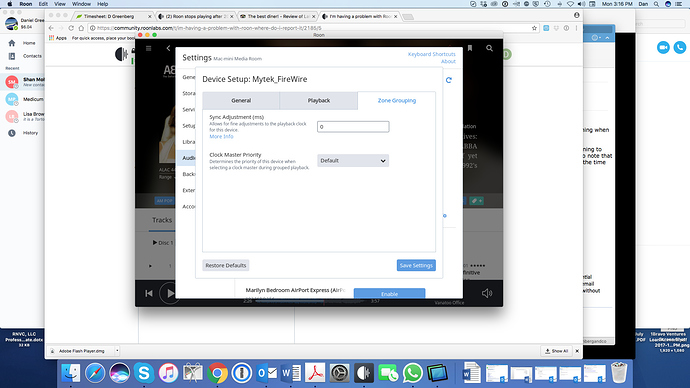 Here are some of the details you wanted. I do not know how to provide a screenshot of an entire screen if you have to scroll down to see it.

Hi @Daniel_Greenberg ---- Thank you for touching base with and providing some feedback to the questions in my post.

I agree with you in terms of our “approach” to your “support” needs. Let’s try to hash out what is going with these drop outs “here” and if there are other issues, I would recommend opening another thread(s) addressing those behaviors.

Moving forward, in regard to these dropouts you are experiencing I still require the following:

" An expanded description of your current setup, using this link as a guide. I want to have a better sense of what your endpoints are. "

“If you play content directly from the core machine via the headphone jack, do you experience the same stopping behavior?”

There are multiple endpoints. Hard wired and Airplay

There is a main zone (and Zones 2 and 3) end point which is hardwired. Zone 2 in turn has three hard wired outputs (on to each set of speakers outlined below) from the same device (Marantz Pre-Pro) or via other external amps, Zone 3 has one set of speakers Apogee Mini Grand’s where signal is also from the Marantz Pre-Pro powered through both Odyssey Mono Extremes and an Arcam 7 channel amp (these are bi-amped speakers).

The output for these devices 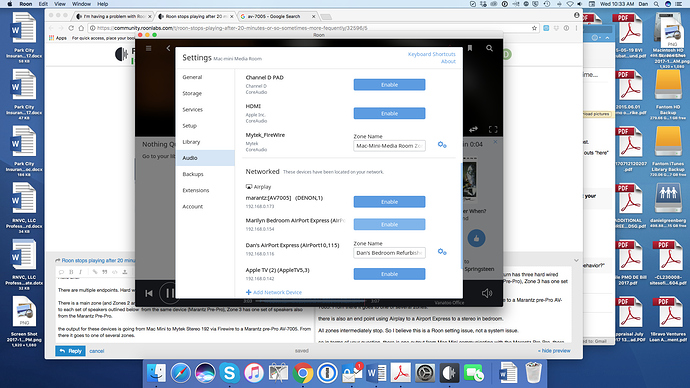 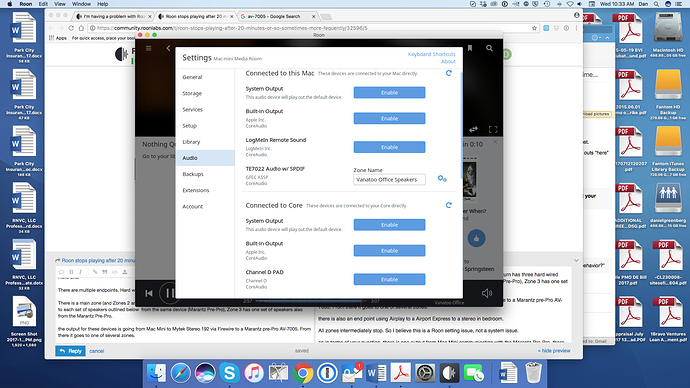 From there it goes to one of several zones. Zone 1 (main zone signal is handled by the Marantz with rear channels and sub-woofer by the Arcam amp.). The main channels are through a Krell KSA-80B.

The other channels on Arcam are used to power center and rear speakers in main room to compliment the B&W 802’s. Also the Martin Login Balance Force 212 sub.

Zone 2 is handled by Rotel amp (3 full channels). Arcam 7 channel power amp handles part of zone 3 (Apogees) plus handled by Odyssey Stratos Mono Extremes. These Apogees are bi-amped. Deck, kitchen and bath speakers are handled by the Rotel. They are simple speakers, nothing special.

There is also an end point using Airplay to a refurbished later generation Airport Express on a separate stereo with tube amp Yaqin MS-20L in bedroom.

All zones playing intermediately stop. It does not matter if on Airplay or Marantz Zones. So I believe this is a Roon setting issue, not a system wiring issue. Music playing has stopped twice today with different remotes showing the song in stopped mid-stream and either one being able to restart it by pushing play.

So in terms of your question, there is one output from Mac Mini communicating with the Marantz Pre-Pro. there is also a combined zone with a set of office speakers connected directly to an iMac. The other playing zones are primarily from the Pre-Pro to Zone2 which consists of kitchen, deck, bath speakers. The iMac (office computer) is combined with this zone and has a set of Vanatoo desktop speakers playing the same selections. The other completely independent zone is the Airplay (Airport Express) bedroom stereo.

If you followed this, you are indeed an audiophile.

Have I provided the answers to your questions?

Hi @Daniel_Greenberg ---- Thank you for the follow up, I appreciate the level of detail in your post!

Moving forward, I have enabled diagnostics on your account and if possible can you please note the times when playback is stopping during your next listening session and we’ll take a closer look into this for you.

Hope to listen this weekend and I will try to write down the specific times and conditions.

As always, thanks for your help.

Eric: I cannot log the specific times Roon stops as I am usually walking around. Not doing serious listening in one spot, so unaware of when the music stops. Do the logs show the number of instances? Can you determine any useful info from the logs? Roon probably stopped 6-7 times over last 2 days.

Hi @Daniel_Greenberg ----- Thank you for touching base with me, very appreciated!

I just took a look at our servers and see that we only received a “partial upload” in regard to the diagnostic report mentioned in my previous post. In light of this I have flipped “diagnostics” off and then on again to reinitiate the request from your system. Once your core machine is online again we should have another report uploaded t our servers. Once it is made available I will pass the report over to our techs so they can have a closer look into your logs files.

Thank you for your continued attention.

The Core Machine is back on. We had a local power outage 2 nights ago that might have taken it off line. But it has been back up for at least a day. I also updated Roon build on Core and Remotes yesterday.

Roon stopped at least once this morning.

Let me know what you find out.

I will let you know what the team comes up with as soon as they have completed their analysis.

Thank you for your continued patience and your willingness to work with us!
-Eric

I did notice Roon stopped about 8:20AM (East Coast time). I restarted from iPad remote.

Look forward to your further input.