Apple Airport Extreme as WiFi Router connected to the provider’s Router (WiFi ON, different WiFi network name), from Airport Extreme (is in-house WiFi Access point) wired to TP Link switch which is connected to my dedicated NAS (Synology 218+) and to my dedicated Mac Mini running Roon Core. Further wired to a second Apple Airport Express (used as Switch, WiFi OFF), to a second TP Link switch to my Metrum Mini Ambre Endpoint for playing music to my main system.

I have a Chord Mojo/Poly Endpoint connected via WiFi to the Airport Express WiFi Router: this is the only WiFi network programmed in the Chord Poly. It is this endpoint path that causes problems. The WiFi on my Mac Mini server is ON also, all to the same WiFi network. I use an Android mobile phone as Roon controller. Else there is nothing connected to the WiFi network.

Roon stops playing displaying message “An audio file is loading slowly. This may indicate a performance or hardware problem”.

This happens EVERY TIME after playing several songs (8-10 songs, about 30-40minutes). Music suddenly stops, skips to next queued song and continues to stop and play, then displays above message. When I stop the music and play again, the working is restored and the failure may or may not happen again after a few songs.

This happens when I am playing to a Chord Mojo using Chord Poly through WiFi, this does not happen when playing through other devices using wired ethernet.

What causes this problem? Roon, WiFi or Chord Poly?? Or is there a wrong setting I do not know of? It seems like “something” is getting busy after 30-40 minutes, no idea what.

I have a polly-mojo and have experienced wifi issues. Mine are not nearly as serious as what you describe. The wifi in the Poly is not the greatest. It could be that you loose connectivity when some other device in your home uses the wifi. Try creating a dedicated SSID just for the polymojo and set it up such that it operates on a different channel than your other ssid.

Poly was (is still?) notoriously bad at Wi-Fi. Have you updated to the latest firmware? From what I’ve read, somewhere along the way they fixed a bunch of bugs in the Wi-Fi, but it still has lingering issues. I have personally never used a Poly, but I do own the 2Go, which shares a lot in common with the Poly. I get Wi-Fi dropouts on it semi-regularly, such that I mostly use it via wired Ethernet (which the Poly doesn’t support).

It’s a shame they went with a cheapo 2.4Ghz-only Wi-Fi chipset (probably integrated into whatever ARM SoC they are using). It’s not even about bandwidth or range. It’s about the 2.4GHz spectrum oversaturation. I live in a dense urban environment. Over 60% of the 2.4GHz duty cycle is consumed by beacon frames from all my neighbor’s WAPs shouting out “I’m here”. That’s not even any data getting transferred… Their excuse that 5GHz doesn’t travel as far is a total dodge and holds no water. They just don’t understand why a 2.4GHz-only device is defective-by-design.

I am using the Poly with no walking around, I am sitting about 6 meters from the WiFi AP with 1 glass door between. WiFi reception is great, no other WiFi devices except my Smartphone and the Mac Mini running the Roon Core. It seems like after 30-40 minutes something is starting, causing the reception in the Poly to lose connection and then reconnects again. Is there an scheduled process within Roon or with my Apple Airport Express doing something like that? Does Roon Support have an opinion on this?

Does Roon Support have an opinion on this?

There is an article in the Knowledge Base: Networking Best Practices

WiFi reception is great, no other WiFi devices except my Smartphone and the Mac Mini running the Roon Core.

No matter what your network setup is like, there are important factors to keep in mind to ensure you are getting the best out of your Roon experience:

I have similar drop out issues with my Mojo/Poly set up, I have created its own 2.4GHz network, the Poly has the latest firmware and I have re-run the wizard through the GoFigure app several times. I am only listening with the MojoPoly late at night when no-one else is using the network.

Sometimes it will play for an hour straight other times it drop out with every song that is played. It seemed worse to my when my phone was left next to the MojoPoly so when I use it I always make sure that my phone is nowhere near but it still drops off of the network. You can see it disappear from Roon in the zone picker then reappear.

My router is an ASUS RT-AC88U and I have also run an original USBridge with Wi-Fi dongle in the same room before I got the Poly, in fact the Mojo was attached to the USBridge. It would never dropout during listening sessions.

I have had Roon support look at my logs, it is not Roon. It’s the Poly.

It’s a shame as it would be an almost perfect piece of hardware for use with Roon if it wasn’t for this massive issue.

I have had Roon support look at my logs, it is not Roon. It’s the Poly.

Or the WiFi. Did you contact Chord Electronics support? Were they unable to help you?

PS: I would no longer buy any WiFi/networking device from ASUS anymore. (Only for the interested: Read about why)

Not yet, juggling too many other problems so this is down the list.

I run the Merlin firmware on my router, never had ANY other wi-fi issues with the router. Up until a few weeks ago it had been running in smart connect mode, I have had up to 20 devices connected, wired and wireless with out it missing a beat.

AAEx can cause issues all by itsef. Quoted from Roon’s Network Best Practices FAQ:

I use orbi mesh around the house. Never any problems at all with mojo/poly. I wander round without issue.

Are you using the latest Poly firmware (at minimum version 2.04)? There was an issue with poly a while back which was resolved via a firmware update on the GoFigure app:

Also, as others have mentioned, we have often seen sub-par performance from Apple networking gear, so this might also be the cause of the issues.

If you have another router around you might want to give that a try instead.

I use orbi mesh around the house. Never any problems at all with mojo/poly. I wander round without issue.

Is this still the case? I have an Orbi mesh with one satellite. I get dropouts when using Roon with my Fiio M11 Pro (sometimes will work for hours (as long as I don’t move it) other tgimes it’ll skip every few minutes). This being the case i’m looking for a better solution for mobile Roon around the house and am considering the Mojo / Poly. Any feedback on your use experience would be great (including any specific changes to the way you have your mesh setup from the default).

Hi, unfortunately, this is still the case, although the phenomena changes every time, sometimes every minute, sometimes it doesn’t occur for an hour. I am almost convinced it is due to the WiFi of my Apple Airport based network and so I am planning to replace it soon.

Poly, going by forum posts, seems to fall in the the “might” work category rather than say a Pi which “will” work.

Works fine for me wherever/whenever my WiFi is behaving. Keep in mind Poly is 2.4GHz band only, but you probably know.

What I disliked and found slow and fiddly is the initial Poly setup with the Gofigure app. But once configured and in Roon Ready mode it seems solid. My experience is based on about a year’s worth of occasional listening (couple of hours a week) using this setup. 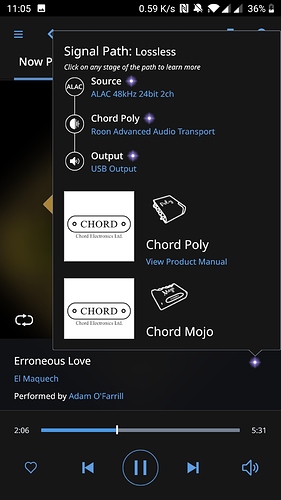 Poly, going by forum posts, seems to fall in the the “might” work category rather than say a Pi which “will” work.

What I disliked and found slow and fiddly is the initial Poly setup with the Gofigure app. But once configured and in Roon Ready mode it seems solid.

Thank you for the invaluable feedback.
Hmm, it is an intriguing dilemma then. I already have the M11 Pro which works a lot of the time, but when it doesn’t it’s simply the most infuriating thing (at that time and in that moment, obviously. I am aware there are bigger world problems out there

I’m just not convinced it’s worth the splurge (£900) on the MojoPoly combo as this will be the main use case and it seemingly may not offer a better solution than the M11.

It doesn’t absolutely have to be battery powered, however, as once i’m settled in the garden/desk etc I am not moving around. In this case I could tolerate the inconvenience of needing to plug it in as long as the end point was portable and didn’t need ethernet.
I think I may be talking myself into the Lindemann Limetree Network, which I hope is not impacted by the same intermittent dropouts as the fully mobile solutions seem to be.

Some people have stapled a Pi to a battery and plugged in a DAC/headphone amp. Dragonfly as an example.
I just use my phone and Bluetooth trading off ultimate quality for convenience and it being “good enough”.

I’ll look into the Pi options, thanks.

I just use my phone and Bluetooth trading off ultimate quality for convenience and it being “good enough”.

Agreed, and I could do this. And probably should.

The other advantage being that going by the forum posts a lot of DAPs have dreadful WiFi range/reception. Certainly my pioneer is crap.
Also they can’t put out a strong Bluetooth signal.

Yes, the smartphone is a sensible, convenient and essentially no-cost option. Especially the garden scenario is probably not one where you would worry or care about a bitperfect path. In my case ears are for sure the weakest link. And quite a few phones around with good dacs and amps now (like LG V series), if you still feel a need to spend some of that £900.