"Roon Tested" device not listed as Audio Device (nothing)

Just rebooted Roon. Squeezebox thing went away; nothing else changed.

As of your system description, it seems that the Denon is the only device connected to your Netgear switch. If I were you, I would try to bypass the switch and directly connect the Denon to the router temporarily to see if then shows up in Roon (move it around if necessary – no need to connect speakers for that).

I tried that weeks ago, before I installed it in a difficult to reach cabinet with air filters and cooling. Basically, about 30 minutes crawling, opening a cabinet, disconnecting 10-15 wires, crawling out with it, etc etc.

Yes, it is the only item connected to the netgear, however, I was using it with WiFi prior to installation and had the same issues.

What I can easily do is disconnect the port on the netgear and set it up to use WiFi again.

Disconnected from Netgear and now on Wifi.

The only change is now my Macbook is listed as a device and it is somehow related to “Built-In-Audio Core Output”.

As has always been the case, I am able to select the Denon from my list of playback options on my Mac. 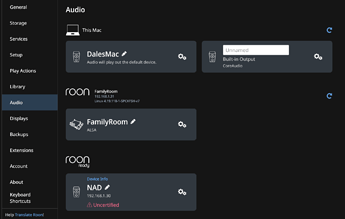 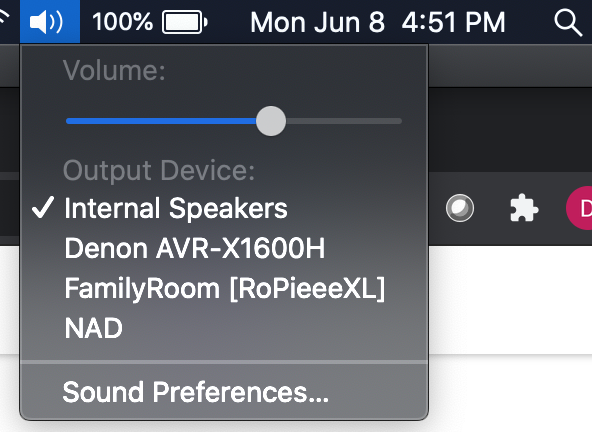 Thank you for testing this and providing all these additional data-points. I think it’s now up to official support to further help you make use of the advertised “Roon Tested” AirPlay support.

Hello All, The majority of the Denon and Marantz devices are Roon Tested via AirPlay. Devices on the list supporting USB DAC input have also received Roon Tested status. -John

This is just weird.
Ultimately, aggrivating.
I started looking at another raspberry Pi to use with the denon and got a little pissed off; this thing is supposed to work with Roon and apparently does not. Why am I going to spend an extra $100+ on something when the Denon/Roon combination should have worked in the first place.

I checked with Denon and I had already covered everything they would suggest.
I am now here hoping it can get figured out.

Everything has the latest firmware - Asus, Denon, Ropiee, Roon, NAD, Netgear - all of it checked today prior to opening this thread.

Nowhere in that link does it say that it will work over the network either.

You need a connection method supported from both, Roon and your Denon, to be able to send music from Roon to Denon. If you’re able to make AirPlay work, then you can use the network to do so. If not you have to use the USB input on the Denon. You may have to acquire a “Roon Ready” network to USB bridge device.

People without extensive A/V component experience, please stop pointing to USB. AVRs with USB-B that can accept direct connections from computers (hence Roon) are rarer than hen’s teeth. USB-A on nearly every A/V component is for cellphone or storage connection only.

USB is irrelevant to Roon in this case. Rather, this is an AirPlay networking issue, maybe due to different subnets.

I wrote my first comment about USB in an update – after I visited the product page from Denon where they wrote about “USB audio” support. If this means in fact that the device only reads the music stored on an iDevice then I’m deeply sorry pointing in that direction. Maybe the manufacturers should make it more clear then what they actually support with their devices.

I’m a network engineer and can assure you these are not on different subnets.
I have enough complexity in my work life, home network is quite simple.

Can it be that some software on your NAS (other media server software and the like) is using port(s) that are needed for AirPlay and thus prevent Roon from seeing AirPlay devices on the network?

If you have another AirPlay device like an Apple TV you could certainly test this hypothesis.

I empathise with Dale. here is what I see in my setup:

Does this help in any way?

Ultimately, everything I have works as it should minus the Denon which is supposedly Roon tested, whatever that is supposed to mean, as acknowledged by both Roon and Denon.

It is also interesting only one Roon support tech has responded to this thread.

I have the sinking feeling I am on my own; Denon had nothing to offer and so far neither does Roon.

It is also interesting only one Roon support tech has responded to this thread.

It’s not that there are dozens of them. In Roon go to Settings|About and click on “The Team” to see how few people are actually making up Roon Labs.

As many other users seem to use Roon’s AirPlay support without problems and your Denon seems to work with others of your AirPlay devices without problems, there is a good chance that something specific to your setup is what gives you problems.

I’m sure that Roon support will come back to you, trying to help you resolve that problem.

For what it’s worth, I may have another data point in 48 hours. I just ordered (being delivered today) the exact same Denon 1600H receiver for the exact same reason (second system in Home office and streaming Roon from a NAS+NUC located elsewhere in the house). We’ll see if I fare any better or I shall join the ranks of the disappointed

Also as a separate data point, I activated my AV receiver as a Roon endpoint via Airplay. This is a Pioneer SC2024, at least 4 years old and Roon ‘sees’ it as soon as I turn it (the Pioneer) on. Enabling took 1 click. This same behavior is what I expect from the Denon, which is 4 years younger. Stay tuned

A couple of points to consider (while we’re waiting for Roon Support):

Core Machine (Operating system/System info/Roon build number) Synology ds218+ Network Details (Including networking gear model/manufacturer and if on WiFi/Ethernet) Wifi LAN on NAS - Core Client Windows 10 via Wifi Audio Devices (Specify what device you’re using and its connection type - USB/HDMI/etc.) Denon DRA-800H Description Of Issue I have a Synology ds218+ and if i set it as Core only few times I can i see my Denon DRA-800H. Most of all the time i cannot play music using it. Sometim…

It wouldn’t work with WiFi, he had to have a wired ethernet connection. Which leads to the second point:

You can try a few things temporarily to diagnose (one at a time, obviously):

Do you have another machine that you can temporarily use as your Core? Does this device show up when using that machine as your Core?

That result would certainly suggest the fault lies with the Denon.

I did not know what a “Core” was until 30 seconds ago.

I guess anything “Airplay” does not show up when the “core” is running on the Synology?

Quick Update
I just connected the Denon via ethernet and it is still connected but with new IP as expected.
Denon AVR-x1600H via Airplay, 192.168.1.69 < Denon using Ethernet connection.

So the netgear is not an issue.