So, at the moment i have some major problems with roon.
The first one is reported here:

in my library i have quite a lot of greek music albums. in most of them, i’ve used the latin translitteration. anyway, in roon metadata i’ve got a lot of links to composers in greek alphabet like this: [image] i’ve noticed that the links don’t work: if i click on the link, nothing happens. in the composer page the names are present, though. so i think it’s a bug, because the same happens with all of these greek links…


it seems that what is displayed in terms of composers under a track (with settings = merge file tags and roon metadata) is completely ignored by roon, that considers only his metadata for the composition. i have dozens of albums where a shown composer do not link to anything, because even if he/she is in file tags, even if it’s shown near a track, it’s not considered as a composer by roon… (for that albums/composition… so maybe links to something else)

then, here i have a different (but similar) problem. this is the last tracks of an album by malmsteen (inspiration). 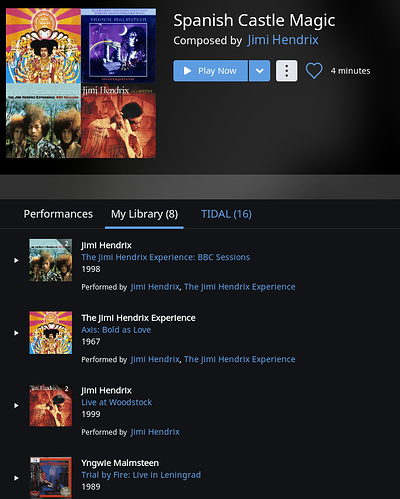 so? what’s wrong? the point is that roon has identified the album, but metadata are wrong, reporting that last track is “spanish castle” (it’s not really important here the wrong metadata, this is not the problem). i simply did not notice because in my settings i’ve told roon to always prefer file tags for track title. but this turns out to be a complete fake, as actually roon only shows the file tags, but ignores them completely (title and composers). so, as usual, things could be ok when roon metadata are correct, but when they are wrong (and, in one point or in another they are ALWAYS wrong), you get inconsistencies like this.

@wizardofoz, thank you for flagging support down here. Very appreciated!

@Niccolo_Terzi, thank you for the feedback and my apologies for the delay here. Moving forward would it be possible for you to supply us with the following materials (see below) so we can see what we can come up with in house based on your feedback?

@Niccolo_Terzi, thank you for the feedback and my apologies for the delay here. Moving forward would it be possible for you to supply us with the following materials (see below) so we can see what we can come up with in house based on your feedback?

Screenshots of the settings you are using in the application in regard to how you prefer your metadata to be handled.

A media sample (one album) that you are consistently noticing this behavior with.

Hi @eric
here are the infos 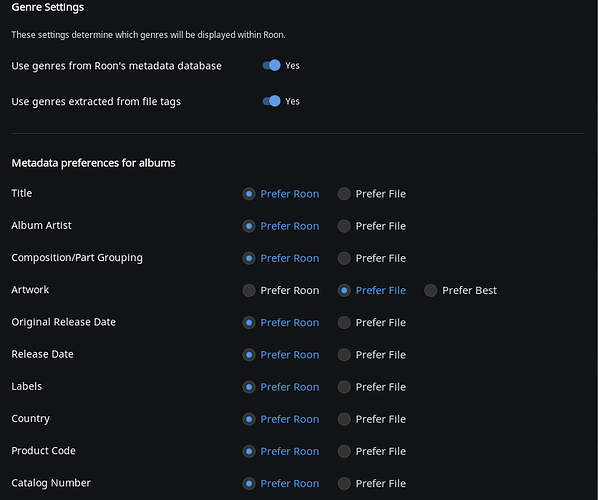 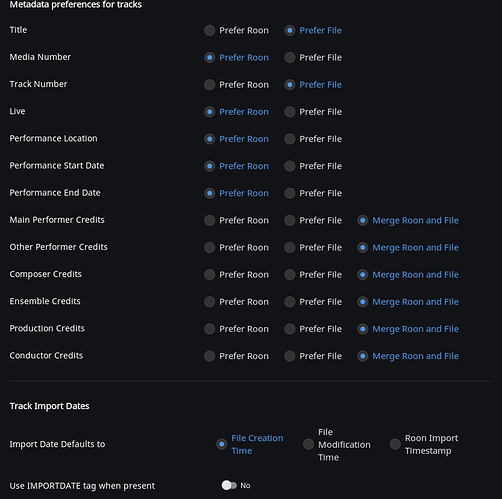 for the composers problem: i’ve already sent to @joel several albums, who (as far as i have understood) has recognized the problem and has told me that maybe the new release could solve it.

for the composition problem i’ve been reporting in this post, you can download the album from a link i’ve sent you in PM.

as i have explained in the post, the album is badly identified, so that track 10 (that should be child in time) is identified with “spanish magic castle”. my problem, though, is not only the wrong identification. in fact, in my settings i ask roon to prefer my file track title tag, and merge composers. it turns out, though, that roon shows these tags, but ignores them in the linking “magic”… in fact, looking at alternative performances of the composition… it links to “spanisch castle” instead of “child in time”.
the problem (together with the composers one) is quite serious (in my opinion) because it seems that for the users is quite impossible to really “take control” on their library, even in those cases when roon metadata are wrong.

well… a way exists: i have unidentified the album. extreme solution, because in many cases you loose to much (i’m thinking in particular to classical music, where you loose the composition identification)

anyway, thanks for you attention.
i just ask you to tell me when you have downloaded the files, so that i can erase them.

Thank you for the follow up and the feedback @Niccolo_Terzi, very appreciated!

Confirming that I have seen your PM as well and that the content has been downloaded. I am going to be setting up some testing to see what we can come up with on our end based on the information you have provided. As soon as we have completed our evaluation I will be sure to reach back out asap.

Hi @Niccolo_Terzi ----- Just touching base with you to let you know that this has not fallen off of my radar.

I just checked on the status of your ticket and can see that it is still with our tech team. As mentioned before, once testing has completed I will be sure to reach out with an update ASAP. Thank you again for your patience here!