This release preserves existing configuration if it detects a previous release of RoonCommandLine is already installed. Only the Roon Core IP and port are reconfigured if necessary. In addition, the default zone groupings in roon_api.ini are improved to avoid grouping incompatible zones. Python scripts utilizing the Roon API have been improved to remove all warnings and use a single source for providing the extension version to Roon.

Changes to RoonCommandLine commands include changing the shuffle and repeat commands to toggles, similar to what was done for mute. Note that repeat does not mimic the Roon loop feature which cycles through three values - ‘loop’, ‘loop_one’, and ‘disabled’. The repeat command in RoonCommandLine and the Python Roon API is a Boolean and toggles between ‘loop’ and ‘disabled’.

A mute_all command was added to toggle playback muting in all Roon zones.

A pause_all command was added to pause playback in all Roon zones.

A play_all command was added to begin playback in all Roon zones.

A stop_all command was added to stop playback in all Roon zones and release devices.

A -i option was added to the roon command to display zone information. In the absence of any -z zone argument, information on all zones is displayed. If a zone is specified in combination with the -i argument, e.g. -i -z Kitchen, then extended information is displayed for that zone alone. The Python script zone_properties.py was added to support this feature.

See below for a summary of changes in recent RoonCommandLine releases. To install or upgrade RoonCommandLine, visit the download link for Version 2.0.5 Release 1 at:

If you are upgrading from a previous RoonCommandLine release then see the Upgrades section of the README.

Install the package on Debian based systems by executing the command

Install the package on RPM based systems by executing the command

Removal of the package on Debian based systems can be accomplished by issuing the command:

Removal of the package on RPM based systems can be accomplished by issuing the command:

To install on Mac OS X, clone the repository and execute the Install command:

That release changed the mute/unmute commands to a toggle. Both commands operate exactly the same, toggling the muting/unmuting of the selected zone or zone grouping. The two commands are retained rather than removing unmute in order to preserve compatibility with any existing scripts that use these commands.

That release fixed a bug with muting/unmuting ungrouped zones.

Checks for Python 3 and Pip were added to pre-installation scripts, MacOS installation has been significantly improved, installation of the roonapi Pip module is handled more gracefully.

RoonCommandLine version 2.0.x releases added support for detection of the Roon Core port as well as its IP address. The port number is stored in roon_api.ini and used in all subsequent calls to the Python Roon API. This was necessary as Roon Labs changed the port number in the most recent update. Extensions shouldn’t be assuming a hard coded port number anyway so this change prompted a good improvement although it was irritating at first. A bug introduced by the change to return status of the Bash builtin type command was addressed. RoonCommandLine commands’ location are added to PATH or full path used in SSH invocations. The installation script has been revised to work with the updated Python roonapi module version numbering. SSH invocations should work in a wider range of environments with this release.

The installation automatically detects and stores the Roon Core IP and port. There is no need for any manual configuration.

Hey @Ronald_Record – thanks for yet another update. Install/Upgrade did not go as planned this time (Mac mini, Monterrey):

Uninstalled and reinstalled to no avail. Is it me?

Uninstalled and reinstalled to no avail.

No luck so far getting this to install or work on macOS Catalina (v10.15.7). I’m using pyenv to manage Python versions, so that could be part of my issues.

I’ll pull a Raspberry Pi out of a drawer and give it a try on that later this weekend. Thanks for the effort!

Thanks for the problem reports. It looks like there is a permission problem, at least on Mac installs. I will try and track it down as quickly as possible but Real Life may get in the way today. Is everybody experiencing this issue on a Mac? If anyone is using either the Debian or RPM package to install please raise your hand. Thanks.

I was able to identify a problem with permissions in the macInstall script fairly quickly and easily. There may be other issues, I am still testing and probably won’t have much more time today. However, I updated the macInstall script and tested it a bit and it seems to work, for me anyway. So give it a try if you want to help me test or wish to update your Macs to 2.0.5r1 today.

To install this release on a Mac using the fixed macInstall script, first:

This should update your previously cloned version of macInstall.

I would suggest uninstalling then installing as one of my tests produced a zero length roon_api.ini which, with the upgrade features in this release, would get carried forward in the install.

To install after the git pull succeeds:

Sorry about this. We have built a Tower of Babel and I forgot to check one of the towers well enough.

Confirmed working – after pulling in the new macInstall script and uninstalling/installing all appears to be OK.

I got it working with your fix and by manually running pip3 install roonapi before running ./Install.

Now to spend some time figuring things out. Behavior is not quite what I would expect, but it could be that I just don’t understand the arguments or configuration.

I don’t know where “Bowie Vavs” came from. LOL. I was expecting to just see a list of my playlists. No luck with flags either…

I would not expect -h to complain about a missing argument for -p. No combination of arguments seems to work, and running it without arguments uses defaults that are not relevant to my library.

Mysterious, but I’ve not ruled out my lack of understanding. I’ll keep poking around.

Now to spend some time figuring things out. Behavior is not quite what I would expect, but it could be that I just don’t understand the arguments or configuration.

Take a look at this page: it will definitely help with configuring and using Roon Command Line.

I would suggest uninstalling then installing as one of my tests produced a zero length roon_api.ini which, with the upgrade features in this release, would get carried forward in the install.

I uninstalled and reinstalled and most things seem to be working. That said, there seems to be a problem with playlists insofar as "roon - l playlists’ only returns one playlist: ‘An Introduction to Qobuz’.

Searching for a playlist keyword also generates an error, as follows:

I’m also getting a similar error with genres:

I guess this is something to do with my Python installation (/Users/djn/opt/anaconda3/lib/python3.8) but don’t know if this is a bug with RoonCommandLine or something I need to fix at my end. Any advice would be gratefully received.

EDIT
I tried updating Python, but it didn’t help:

@David_Snyder and @DaveN , thanks for the problem reporting. It looks like the issues are on my end, not yours. I will get fixes out as quickly as possible. It appears there are multiple issues and those are not restricted to a single command. Also, I don’t like how the list commands use a default in the absence of a search argument. I think they should list all when none is specified. So I might change the intended behavior. All this means it might take me more than a day although I think there are some immediate fixes I could get done easily and quickly.

As for where does the “Bowie Favs” come from when listing playlists, this comes from /usr/local/Roon/etc/roon_api.ini which is used by all the commands to set some configuration options and fallback defaults. The distributed default playlist is “Bowie Favs”. These default settings are meant to be configured by the Roon user to suit your library and taste. I just picked some initial defaults. I may change the way this is handled but for now edit roon_api.ini and change these default settings to fit your library and preference. At any rate, listings should probably default to “all” rather than the default.

Also, @David_Snyder , the problem with listing playlists seems to be with the list_playlists command but works properly (for me) when listing playlists with roon -l playlists. The roon command is used to frontend all of the RoonCommandLine commands and is intended as the primary user interface. It massages the arguments properly (in this case, adding a __all__ argument if no playlist search term is specified).

Still, the backend commands should work as expected when invoked directly and without need for arcane knowledge of how to supply the proper arguments. Let me know if you encounter problems with the roon command not functioning as expected.

That works for me. 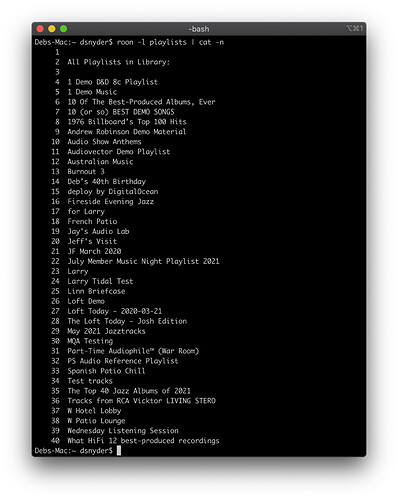 This isn’t working for me, I have 17 playlists, only one of which is displayed …

EDIT: I don’t know if this will help, but I just tested the other list options. Some work, but ‘genres’ ‘genalbum’, genartists’ and ‘tags’ all fail with pretty much the following error …

@DaveN , I am not yet able to reproduce what you are seeing. Perhaps this is due to some difference between our environments (i’ve tried on both Mac and Linux but of course Python is a many headed beast) or a difference in our libraries (this should not matter unless the library is damaged) or our RoonCommandLine configuration (my guess).

You are somehow managing to provoke an unchecked situation in the Python Roon API where it is trying to get a property of an object but that object has not been set. I am working on submitting some changes to pyroon to address this. But I do not understand why you are seeing this while I am not able to provoke it.

I will keep trying to reproduce these issues. Can you send me your roon_api.ini and perform a test by directly invoking a Python script?

For example, try listing all of your tags by doing the following:

Or do something similar with any of the other listings you have had problems with. This will probably eliminate the roon command and the backend list_tags command as possible culprits and narrow it down to just the Python script and Python Roon API.

Can you send me your roon_api.ini

For example, try listing all of your tags by doing the following:

Or do something similar with any of the other listings you have had problems with.

I don’t know enough about Python to diagnose the following, but it does seem to indicate that it’s something about my environment that’s causing the issue:

@DaveN , it looks like the Python Roon API module did not get installed correctly on your system. This may have been the result of the order in which RoonCommandLine and Python were installed as I think you upgraded Python after having installed RoonCommandLine. It’s probably something i should address somehow but I’m not yet sure how. Let’s confirm. Try running:

There are several pitfalls wrt Python module installation including global versus local installs, installation being Python version specific, and use/access to cached modules. These issues are outside the scope of projects like RoonCommandLine and are really issues with the design of Python. Hopefully your issues can be addressed easily with a simple module install. If not, we will continue to investigate.

I think you’re on the right track, but we’re not there yet …

So I reinstalled and now get …

Is there something I need to change?