I’ve installed Roonserver on my WHS 2011 system, and it is up and running.

However, there is a firewall issue, I have added two inbound and outbound rules for each of the RoonServer.exe and RoonAppliance.exe applications to allow communication on all protocols and ports for these two programs. But no Roon remote can connect. They see the server, but report that connections fail.

If I turn the WHS 2011 firewall off for the local network, then the remotes connect and the library is displayed. However, clearly I don’t want to run without a firewall.

It’s probably simple, but I can’t see what I’m doing wrong at the moment. Can anyone help? Thanks.

[quote=“Geoff_Coupe, post:44, topic:3195”]
What is the magic incantation required for the Windows Firewall settings on the WHS 2011 system , and why doesn’t the installation process handle this?
[/quote]Hi,
WHS 2011 is not on the supported list What are the minimum system/hardware requirements? That does not mean it won’t run, but it’s not supported “out of the box”. I know some people are running Roon on MS Server 2012 (also not supported) maybe one of those chaps might be able to help.

I’ll leave a flag for @Mike one of the Roon guys who might be able to help with your firewall question.

Thanks Carl. Appreciated. I’d really like to have Roon running on my WHS, since it’s my media server.

Have you allowed it for UDP and TCP?

Yes, all protocols and ports.: 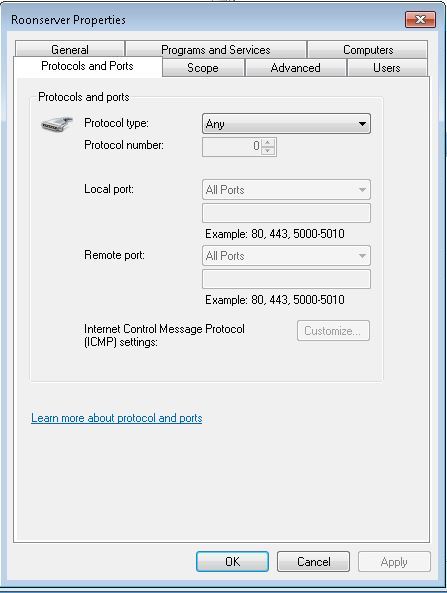 Actually would like this as well. One less component to run.

Thinking out loud now, but have the core running on WHS 2011 and use one of the endpoints (Aries, sonore, PSaudio, etc…). So the WHS only needs to send the bits right?

Would that be possible?

The Firewall in WHS allows fairly granular control. You can have rules applied to network traffic at a Domain, Local (private network) or Public level.

For anyone who has got Roon running on a Windows Server 2012 - what are the inbound rules that you have for Roon? Thanks.

OK, I did some further poking about and found this post:

Thank you. I found out more about how the server machine is configured. Basically the server is setup behind another router which uses Double NAT in Bridge mode. I have opened up UDP Port 9003 and now ROON Remote can detect the ROON server, but is unable to connect. It says ‘Connection Failed’. See attached screen cap. [image] Is there a way to config ROON to use a specific TCP Port? Thanks ws

Initially, I tried modifying the firewall rules associated with the roonserver.exe to add those specific ports. This didn’t help.

What turned out to be the solution was to create two new rules (one for the UPD port and one for the TCP port range) that were not tied to the roonserver executable. I.e. they were purely port rules (but I made them apply only for the local network).

Now my Roon remotes can see the Roonserver running on my WHS 2011 system, and I’m a happy camper once more.

Well, I think I have to give up my dream of running Roon on my WHS 2011 system.

Streaming to Roon remotes connected by WiFi is unusable. Tracks just stop playing, usually after a few seconds. These Wi-Fi connected remotes are running on both Intel Atom systems (ThinkPad 10 and Surface 3) and an Intel Core i7 laptop (Lenovo Yoga 900).

On Roon remotes connected via wired Ethernet, performance is fine, no dropouts.

This is with RoonServer installed on a WHS 2011 system that has an Intel Core i3-4130T processor running at 2.90 GHz. True, it’s no speed demon, but it’s more than enough to run both Plex and Emby servers, our Home Automation system (Domoticz) as well as the WHS Media Server (NAS). During the Roon testing, no Plex or Emby clients were connected, although the servers were running.

I’ve now installed Roon Core back on my desktop PC (an Intel Core i5-4460 @ 3.20 GHz system). All Roon remotes are behaving; no dropouts. In fact, I’ve got all three WiFi systems playing albums simultaneously at the moment.

tl:dr - Roon doesn’t work properly on WHS 2011, and since it’s not a supported OS, I don’t think it ever will.

I’m sorry this didn’t work out for you, but it’s a very helpful post for others interested in trying the same thing.

I am running WHS server and have not experienced this issue. Generally the WHS I am using (RIPNas v4) has no issues running any windows software. There must be something specific in Geoff’s set up as I literally only had to load the executable and provide permissions to Roon when the prompt box specified. Been a million bucks since then, and this makes sense since apparently the kernel in WHS2011 is similar to Server 2012. I would not let Geoff’s rough experience dissuade anyone; you have to try it yourself.

@Dewalt, you could well be right - the issue with the WiFi connected devices could well have been down to a networking problem.

Nevertheless, I decided I should move my server OS from WHS 2011 to Windows 10 Pro, for two reasons:

Of course, others may decide that the risks are small enough to be able to continue with WHS 2011. It’s a personal thing. I have to say that I miss WHS 2011. It was one of the best Microsoft products that nobody ever knew about, and which Microsoft has shamefully shafted.

Hi - I need some help. I installed roon server on our WHS 2011 box. However, when I click to start it - it doesnt run so I cant even get to the stage to set any parameters. Do I need to reboot the server? I haven’t done this yet as I didn’t see that I needed to in the support page

Roon Server doesn’t have a GUI. All you will see in the WHS 2011 desktop interface is the Roon icon showing the server is running on the Taskbar at the righthand end.

You need to use an instance of the full Roon application running on another PC to control and configure it. This is the so-called “Control” mode. Roon running in this fashion is also known as a Roon Remote.

Thanks Geoff. We had is setup on a PC but wanted to move it to the server. WE’ll try this and see if we can get working

If you’ve already had full Roon running on a PC, you may want to check out this FAQ about migrating your database to another system.

Hi Geoff - If Roon doesn’t run on WHS 2011 do we need to upgrade to Windows Server Essentials 2016? We wanted to run Roon from a server not a PC/laptop so we could have it running all the time instead of having to turn on a PC.

Why don’t you just run Windows 10 Pro (or Linux) in headless mode on a PC? That’s what I do - I have an Intel NUC running Windows 10 Pro as my server.