Scrolling with the mouse wheel does not work correctly

Scrolling with the mouse wheel does not work correctly. I’ve tried 3 different mice now and various settings and it’s almost impossible to use effectively. To me, this feature is “broken”. I’m sure they didn’t design it that way either. Perhaps ‘broken’ is rather harsh, but it certainly doesn’t work very effectively. As for horizontal scrolling, there has been multiple posts dating back 3 years asking for vertical scrolling, so there is a substantial audience asking for this feature. I would hazard a guess that almost all using Roon on a desktop PC do not have a touch screen, so horizontal scrolling would only benefit those with touch screen laptops. The mobile versions of roon scroll vertically. We should have the choice. the vast majority of programs and apps out there scroll vertically.

Scrolling with the mouse wheel does not work correctly. I’ve tried 3 different mice now and various settings and it’s almost impossible to use effectively.

Perhaps you are thinking that it should scroll continuously? It doesn’t; it scrolls a page at a time. That works for me, and works effectively (for me).

That’s very odd, and I’ve not heard this from others here in the forum. Perhaps someone in the support team has a suggestion; flagging @support for you…

I agree with OP - scrolling though AMG reviews / artists bios is painful. It is always very choppy and nothing like scrolling through a website - which is what it should be like. Reviews and bios are easily my favorite aspect of the app - and this scrolling issue nearly ruins the experience.

so when you move your mouse wheel (scrolling) the page moves in a manner like a webpage - without jumping several lines (or more) down?

I also have issues with mouse scrolling. Not sure which screens are problems for you, for me it’s primarily the Album and Artist screens. Using the wheel often results is moving multiple pages to the left or right.

I just noticed that there are small dots below the images for both Artists and Albums representing the number of pages and clicking on a dot takes you directly to that page. See …

A little more work than scrolling using the wheel but much more predictable.

Er, dots? What are you running Roon on? On all my Windows 10 machines, I see a scrollbar, which if I grab it, will scroll by page and show the first two letters of the first item’s title… 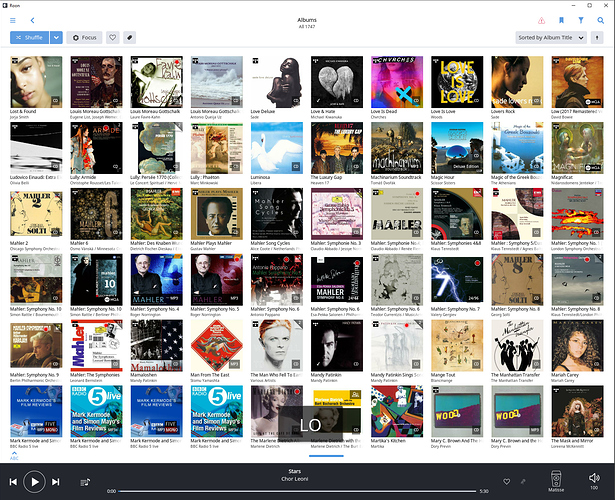 Whats a mouse? Actually I haven’t used one in over 10 years.

I’m running on Windows 10 and all my software is up to date. 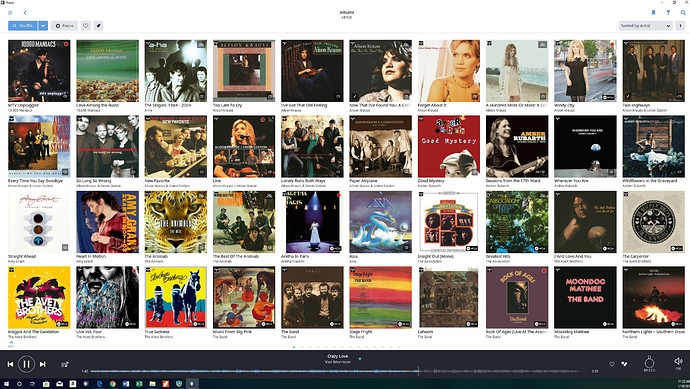 I only have 526 albums, I wondered what would happen if I had too many albums to show discrete dots for every page. Maybe you get a scroll bar?

Hey - you’re right! I’ve just done a Focus to show just Soundtrack albums (I have 132 of them). Now the Album browser just shows 4 dots at the bottom for the four pages. I learn something new every day. But I can still scroll a page at a time using the mouse scroll wheel.

Hopefully my library will grow to be big enough to show me the scrollbar.

Perhaps change your mouse for one with a wheel that moves in notched increments? I have a cheap basic Logitech mouse that’s perfect for my 70-year old fingers here…

Thanks for the suggestion. I’m using a Dell mouse now and while it looks nice it has a button on the right side that drives me crazy when I click it by mistake.

The problem appears to be ROON not the mouse. In other software my mouse scrolls as intended and is easy to use. However, whilst in ROON one slight touch of the scroll wheel and it scrolls several pages at once.

Hey @John_Birch – maybe I missed it, but I don’t see any information about what operating system you’re running, or what mouse you’re testing with, or what settings you’ve configured your mouse to use.

Can you give us these details and we can look into this for you? On the Windows 10 machine I’m using here, moving the mouse wheel one tick moves the browser one page, but with some more details we can figure out why you’re seeing something different.

I’m using Windows 7 and a Logitech mouse. The same response occurs on different mice I’ve tried which are another logitech and a generic one.

I find a mouse pad virtually unusable. It’s only possible to pseudo-swipe right-to-left for example if you “grab” an album pane in the right hand side of the screen. That is, it doesn’t work in 50% of the screen. So I use the arrow keys on a lap-top.