A search for Norah Jones doesn’t bring up her new album, Pick Me Up Off The Floor.

It is available on Qobuz and can be found by searching for the title, but not the artist. This is just one of many failed searches on Roon.

This is basic and should be fixed by now. What gives?

Not getting Artist Search results Support

NUC Rock, Roon v1.7, Build 555 Stable Ethernet to NUC and Mytek Brooklyn Bridge, wifi to iPad When I search for an artist, I only get results if the artist is in my library. Otherwise I get random albums that happen to have the artist’s name in the title. I’m sure this didn’t used to happen, and must be a filter I’ve set somewhere. As an example, I search for Kelly Clarkson and get a track as the too hit, and even when I click show all artists, still don’t get a hit. Then if I search for a par…

It was available all day today via Tidal in Roon.

Not everything appears immediately from the streaming services that might show it in their interfaces. Might take some days or so to be distributing out to services like roon. I played yesterday in roon from tidal.

That search revealed 5 titles of hers via Tidal, the last of which was Pick Me Up off the Floor (in MQA).

It’s here when I look. As other say not all albums sync straight away it’s on how they release the info to Roon they are not using the basic API like others do it’s far more complicated affair. 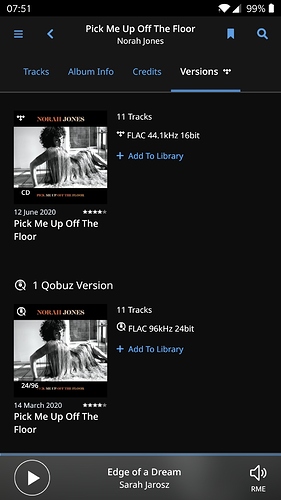 I see it on Qobuz when I search on Norah Jones…

I bought the CD

Really boring. I couldn’t get through it.

Not her best outing that’s for sure. I went in to another room whilst listening to get something and didn’t go back to finish it.

Setting aside the merits of this release, I do believe currently something odd is going on. Unlike OP, it shows up as a search result for me, but when I try to add it to the library it does not show up under Albums. (although it is immediately added to my Qobuz favorites, visible in Roon and native interface. As it should be)

With a release date of March 14 on Qobuz I would not expect this to happen. But I note the June 12 date given by Tidal (to which I don’t subscribe) in a screenshot above. Maybe that’s a clue to it being a fresh addition after all, especially since it also the very first entry under Qobuz Grand Selection now? In which case @wizardofoz suggestion above may well explain the behaviour, with data still filtering through.

Still, once the album is visible and can be played, as is the case, adding it to the library, without this sort of anomylous behaviour, should really be possible IMO.

Edit. Qobuz’ native interface gives June 11 as the release date for the now favorited album, which makes more sense than the March 14 date presented in Roon. Wonder where that comes from?

I believe its a known Phenomenon (ie not bug …)

It was available to see and preorder in Qobuz back then, and you could play the tracks from it that had been released. Qobuz do this a lot I have noticed. GoGo Penguins latest was the same , the album came up in searches ages ago and I added but noticed that only some tracks where available. It also would not allow Roon to play the full release when it came until I re added it. So it’s a quirk of Qobuz having albums showing up before they are out that’s confusing Roon.

No such problem for me using Tidal via Roon.

That search revealed 5 titles of hers via Tidal, the last of which was Pick Me Up off the Floor (in MQA).

My instance of Roon finds 2 Norah Jones albums on my local NAS (as it should do) along with a further 7 albums on Tidal.

it’s a quirk of Qobuz having albums showing up before they are out that’s confusing Roon.

Whether it’s called a bug or a feature or simply a fact of (Roon) life, a sequence of events and result like this does bug me. But mildly.

As noted above, there can sometimes be a brief delay between when an album is available on Qobuz and when it is available in Roon.

It looks like that may have been the case here because I’m seeing this album okay on my end currently. If you’re still seeing any issues please let us know!