Search results not as expected

I don’t curate much or even look at album versions, credits, etc., but I noticed the following.

Searched on Joan Osborne and selected ‘Relish’ from the returned list. Listing ‘Versions’ from the resulting Album page gave me this - 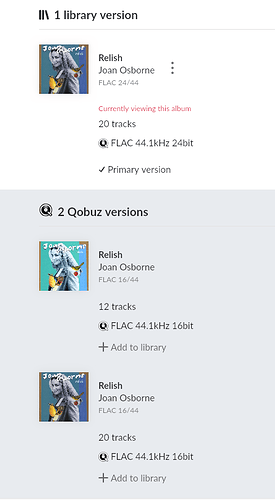 But wait, I have ‘Relish’ on a local disk.

If I set ‘Focus’ to only look at my storage, sure enough there’s Joan -

If I select from there I get - 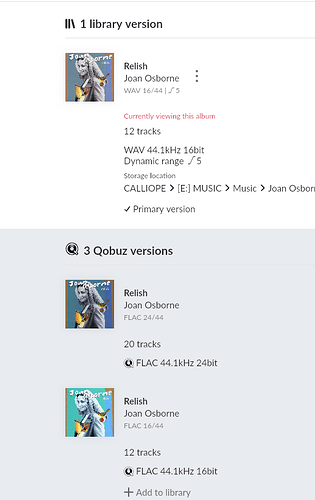 Don’t know if this was always the case or if it’s due to V1.8. I feel I must have a switch set wrong or not set at all, as the case may be. I can’t believe an error as obvious as this got thru beta.

The problem is that if I want to play the local version, I have to use ‘Focus’. How many other local rips are like this? Dunno, without going thru, in my case, about 400 albums.

As far as Roon is concerned, these are two distinctive albums – different track count (12 versus 20).

Qobuz case 1: there are two other albums, besides the one in your library, from the same artist with the same name.

Qobuz case 2: there are three albums from the same artist with the same name. One of them already in your library (no “+Add to library”).

It didn’t do that for me. I did a search for Joan Osborne, selected Relish and it offered my 24/44 version of it. Under Versions it listed three Qobuz versions that I could play instead if I wanted to. But it’s first choice was my version.

As far as Roon is concerned, these are two distinctive albums – different track count (12 versus 20).

OK, to distill my complaint further, a search only returns this, with a Qobuz version being marked as primary -

‘Focus’ pick returns this, with the rip being marked as primary - 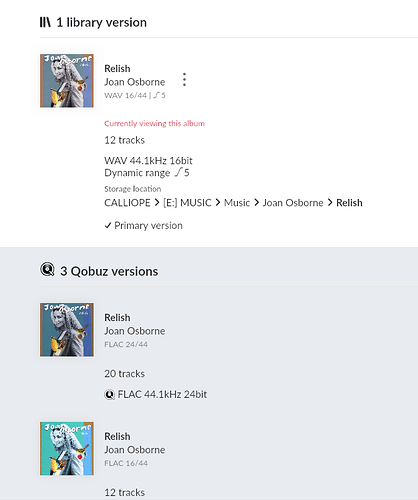 selected Relish and it offered my 24/44 version of it

By this, you mean a rip of ‘Relish’ that is local?

What exactly determines which version is marked ‘Primary’? I always thought it was your ‘best’ local version unless changed by the user to an online version?

a search only returns this

Sure both are primary (not versions of each other) and you also wrote “I set ‘Focus’ to only look at my storage”, so no way would Focus return both albums.

I thought its picking the highest res version as Prime, unless you choose differently.

you also wrote “I set ‘Focus’ to only look at my storage”, so no way would Focus return both albums.

No, the instance I gave of Roon not finding my rip was when I did a search on all my albums. The place where I invoked ‘Focus’ showed everything.

What exactly determines which version is marked ‘Primary’?

I thought its picking the highest res version as Prime, unless you choose differently.

Misses the point. Which is, ‘Search’ of my full library doesn’t return all versions.

OTOH, the full album list has ‘Relish’ as it should be.

Guess I need a ruling from @support.

BTW - For some reason, the local rip (44/16) sounds better the anything on Qobuz.

The place where I invoked ‘Focus’ showed everything.

To cap this off, here is a list returned from Search , issued from the Home screen -

No, if you bother to look at my first post, you will ‘Focus’ is set to ‘Music’, which means Local storage.

I’m afraid I have given up with 1.8. There seem to be wild inconsistencies showing between the overview and discography tabs - I still don’t understand the stylistic or functional point of these, either. I’ve encountered issues like the one you have here too. Artist appearance nonsense; more clicks to do the same net thing as previous versions. For my use case, the negatives now outweigh the positives.

Thank you for your considered reply. Let’s see what support says.

Yeah, I hope you didn’t think I was crapping on your thread - I was just mentioning I’ve had similar weirdness. I hope support helps you get to the bottom of it.

This all makes me crazy. Either it’s a bug or Roon is being too clever. Or I suppose it could be that this is immensely complicated behind the scenes. But you should just not have this many people who are experienced with Roon not understanding how to look at an album.
But I’m beginning to understand based on @BlackJack’s comment.
There are two releases of Relish. One has 12 tracks, one has 20 tracks.
For each release, there are at least two versions with differing formats/resolutions.
Depending on how you selected the album, you may have either gotten the 12 track release or the 20 track release. If you picked the 12 track release, it shows it in your library and shows the other versions/releases as ‘In Qobuz’. If you picked the 20 track release, same thing.
Also, because there are two releases, each release can have a primary version.
A big problem under all of this is there isn’t a good distinction between release and version. Roon sort of lumps them together (they all end up under ‘Versons’), but it is also considering them as discrete entities (with distinct primary versions).
The other problem is that even if you have both releases in your library, it will show one in your library and the other in Qobuz.
Gotta be a better way…

By this, you mean a rip of ‘Relish’ that is local?

Yes, as first choice. With three Qobuz versions as alternatives. 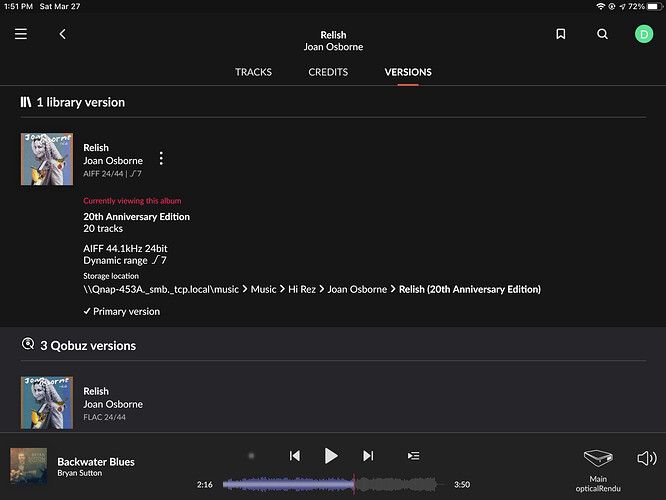 Hmm, the only thing I can note here is that your version is on a NAS, although that shouldn’t make any difference.

Did you get to the screen you are showing me by entering something in the Search box that is on the Home screen?

But it all used to be relatively easy to resolve with “Group Alternate Versions”. I swear though something fundamentally changed in 1.8 because it seems to be fcked beyond all recognition.

Gotta be a better way…

I hear you, but when I enter ‘Search’, and don’t use any precluding criteria, I expect it to return every freaking release/version of the thing I am searching for.

Did you get to the screen you are showing me by entering something in the Search box that is on the Home screen?

Yes, I typed Joan Osborn into the search box on the Home Screen and from the list of choices that came up clicked on Relish. The screen capture I posted is the result. I didn’t even know I had that album, guess I have to listen to it now.