When Phil announced AO was RoonServer ready with Server with his beta program I pounced.

However still can’t get RoonServer in Server Core mode to recognize my NAS drive.

Anyone from Roon know if there is a simple fix? RoonServer recognizes the path without issue in GUI mode. In Core something is happening. JRiver does maintain ability to read the NAS in Core mode so it is a Roon issue

Do you really expect Roon to invest time debugging someone else’s issues?

If you have nothing to add why would your waste time replying.

This is not another “product” but an operating system that a significant number of us use. This is a compatibility issue with Server R2 in Core mode even without Audiophile Optimizer.

If the issue is with Windows my apologies.

Haven’t heard anything pertinent I’m afraid. There was some concern by the devs that the core mode technique recently published by AO, which avoided loading the media pack, meant that codecs required for MP3 or AAC file types weren’t being loaded and Roon couldn’t elegantly explain the fail.

I’m not sure if AO has fixed that, but the next version of Roon will include a warning if codecs are missing.

That may have absolutely nothing to do with your NAS drive, or it could be some issue if the media pack is not loaded. If I hear anything I’ll post back here.

The issue isn’t the media pack or Windows essentials.

The issue is when Server 2012 R2 is used in Core Mode of Window Server, RoonServer isn’t accessing the NAS or network. Some service must be getting turned off in Windows in Core mode of Server 2012 R2 that RoonServer needs. Other players like JRiver have no such issue so Roon must be doing something different.

No problem. My apologies for being a grumpy misanthrope

Hi all I too have the same problem with the nas AO and Hqplayer with windows 2012 server core mode, roon can not see my music library on NAS , in gui mode all ok although after loading much of the library I continuous disconnections roon itself.
There are already three-day trial is hope to solve before it ends the trial because I do not want to give up the best sound quality of the core mode.
Thanks.

Hello guys, we aren’t very familiar with the Server Core mode, but let’s try to troubleshoot the issue and see what we can do. Can you give us the exact steps we need to do to replicate the issue?
In addition to that can someone reproduce (Launch RoonServer > Add the Network Folder > Get Failure > Close RoonServer) the issue with RoonServer and send us the logs ?

Thanks for the help. Given that I have two partitions, one with windows 8 where roon works perfectly and manages to find all the pieces of my nas (western digital my book live) I mapped as \MyBookLive \ public\Shared Music everything works.
The problems start when I switch windows 2012 r2 server is core mode and in gui mode. In gui start scanning library always mapped in the same way, after having scanned some songs, roon server disconnects and then reconnects it is going on the task manager I can see that the file roon appliance and processreaper.exe disappear and then reappear when It reconnects roon.
In core mode instead does not disconnect sees the library of the nas scans but in the end is no file to be added.

I have several logs in the log directory of roonserver whom should I send?

The problem of disconnection continues occurs only if 'of the NAS network drive is connected if the call disconnects roon not restart continuously.

I hope someone’s technical support can not solve my problem.
Thank you.

After many tests I was able to fix it in GUI mode in practice my music library contained over to the audio files, other files including .exe, deleted all, the library has been imported all is there were no more disconnections.

After resolving tried in core mode and when I go to import the files makes me scan the various units including the NAS scan starts, but after a few seconds without giving any error and ends by going to the various storage units have the words "watching for new files in real time "but is not imported anything including files I have in my ssd. What can it be? Thank you.

This is the image that appears as you can see the files are scanned but no trace imported be it a local file on the NAS. 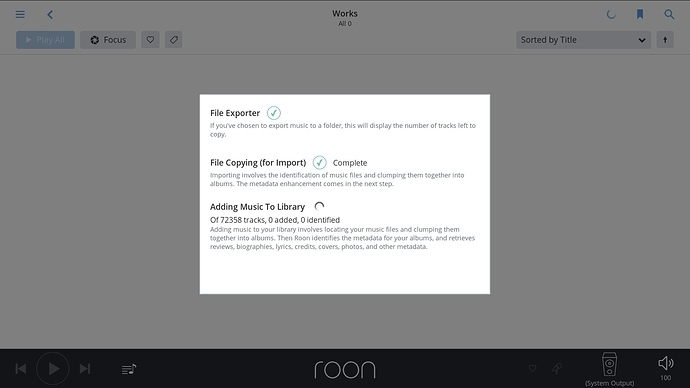 Hi, no one can solve my problem?
Thanks.

I am in the same boat still waiting for someone to respond and there are many others as well.

Let’s flag @vova to see what he can report. I suspect, however, that if he had found something he would have reported back.

Server 2012R2 is not officially supported by Roon, so the usual kind of Support investigative response may not be available. Being an AO core mode NAS issue means it is some distance off the reservation and Roon may not have the software/hardware needed to reproduce the problem.

@andybob : I just saw that 2012R2 is officially mentioned in the roon requirements (yet not the core mode explicitly)
@priaptor : did you already contact AO about this ? They mention Roon Server explicitly and they go for the core mode so they might have a clue ?