So now I created a new playlist based on those tracks I added above, added it to a new tag, and the Shuffle from tag works correctly (all 25 tracks): 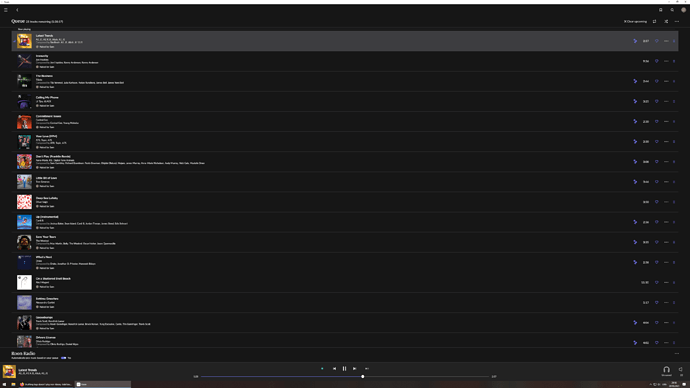 I don’t understand, if it worked before as you say in your OP, why would Roon remove the ability to just Shuffle from tags with local copies of playlists (with non-library tracks). It now takes multiple and repetitive steps to get the same resulting Queue.

Question to Roon: What functionality was added as a result of this change?

You may also encounter this inconvenience when Roon recommends something, you open this album’s page and only on the Versions tab you can understand that you already have this album in your library.

I don’t understand, if it worked before as you say in your OP, why would Roon remove the ability

I think this is the answer:

Random track shuffle from focussed not possible in 1.8?

The way shuffle works was changed and no longer uses the Roon Radio UI for shuffling. The shuffled tracks are all added to the queue.

Shuffling tags even in 1.8 worked using Roon Radio UI before build 763. This was a workaround when they broke Focus bookmarks and shuffling albums. But since 763 there is no Roon Radio UI for any shuffle. And unfortunately new shuffle logic uses only library content.

But since 763 there is no Roon Radio UI for any shuffle. And unfortunately new shuffle logic uses only library content.

@SimplicityCompass But still, as you can see in my original post, we also have a workaround for this: select all playlists with non-library tracks and then shuffle works! (Hopefully in the next version they won’t break this ability either)

But still, as you can see in my original post, we also have a workaround for this: select all playlists with non-library tracks and then shuffle works! (Hopefully in the next version they won’t break this ability either)

Of course, but then you still have to add the tracks in each album from your Roon library to a new playlist, adding that playlist to the tag… for shuffle from tag to include albums. The same lengthy process for other non-playlist tag elements like tracks/compositions…

I assumed that just adding the tracks in a local copy of a TIDAL/Quboz playlist to your Library, in one easy step, from the playlist itself, would be the most simple method to work.

I think this is the answer:

We can only speculate the reason for the change - more pathways for improvements to/new features; better code, etc… but like so many changes we are not given that information.

I love Roon, but it is becoming increasingly infuriating.

No, I mean that you still can shuffle playlists with non-library tracks without any additional actions. Just select all playlists in your tag and click Shuffle from the selection, not from the tag.

We can only speculate the reason for the change

Well, they consider it “wacky” and confusing, but I loved this mode!

Same old Roon under the hood?

We never let you add more than a few thousand tracks to the queue, but having the ability to shuffle in more than 5000 tracks is an important use case, so we added this wacky shuffle “mode”, which was different than radio, and different to queue shuffle. It created a lot of confusion.

So, to solve this confusion, we decided to eliminate the confusing “shuffle mode” and just add tracks to the queue w/ shuffle on.

Actually I was very hopeful after these words:

How do people typically mark artists/albums for future exploration?

Yes, we’re aware of this need and have a plan for it. The divide in capabilities between “in your library” and “not in your library” is mostly artificial, and results from the history of this project more than conscious design choices.

There is a substantial re-engineering effort involved in addressing this, because a huge body of code sits on top of this structure, so it will take a while, but we are planning to do it at some point.

But with every new release they do the opposite and only increase this divide in capabilities.

No, I mean that you still can shuffle playlists with non-library tracks without any additional actions. Just select all playlists in your tag and click Shuffle from the selection, not from the tag.

Sorry, that could have been worded better - I’m refering to the other elements that might make up a tag - albums, genres, compositions that can’t be selected at the same time as the playlist(s) in that tag.

As you refer to here:

So you have to add the tracks from the albums already in the tag to a new playlist, which is added to the tag.

And again thanks for the links from members of the Roon team, obviously I had missed those.

I’m refering to the other elements that might make up a tag - albums, genres, compositions that can’t be selected at the same time as the playlist(s) in that tag.

Yes, unfortunately that’s how it is.

How do people typically mark artists/albums for future exploration?

Yes, we’re aware of this need and have a plan for it.

But I still believe in miracles and patiently wait for better times.

My current workarounds. I warn you, they are not very elegant. And they only work when all the tracks that you have in your playlists, also exist in a library version. I am in this very lucky position since in Tidal I favored all tracks in all playlists before making a local copy of them in Roon.

(1) For relatively short playlists (up to 10 hours?)
Choose a playlist in which you have plenty of technically ‘non-library’ tracks (‘Date added’ column is empty). Select the ones with no ‘date added’ (you can arrange the column ‘date added’, that helps to select them). Play now. Make sure you turn Radio function off so that the music stops after you have played your selection (play bar > hamburger (queue) > automatically pick music based on your queue > no). Let it play all night (with the sound off). Next morning. Go to My Library > Tracks. Arrange them in order of last played. Select all the tracks from the playlist you were playing. Add them to the playlist you were playing. You have now all these tracks twice in your playlist, once the Library version (with date in the column ‘Date added’), once the non-library version (without a date in that column). Select all the tracks with no date in that column (the non-library versions). Delete them. You have now replaced all these non-library versions in your playlist with library versions… and from there everything goes smoothly, including shuffling those tracks when you put the playlist in a tag. Big fun, this Roon experience! After a couple of hundred (or thousand) hours of playing music without listening to it… I will be saved! Question: will that be before or after Roon comes up with a better solution?

PS: Since the music is playing all night, your scheduled backup will fail. You can stop the music the next day and force a backup (Settings > Backups > View > three dots > Force backup now).
PPS: Since you are making lots of changes, it might be wise to backup daily.

(2) For long playlists
Select the playlist. Make a copy of it (three dots > Add to playlist). Give the copy a new name. Go to My Library > Tracks. Select them all (right click the first track, Ctrl A). Add them to the copy you made (three dots on top > Add to playlist). Go to the copy of the playlist. And then I had hoped: display doubles only (cogwheel > Only show duplicates) to then make a new playlist with the library-versions of those doubles. Unfortunately, Roon does not consider the non-library and the library version of a track as a double (although obviously they are). So here, the only thing you can do is put this playlist (with the copy of the original playlist + all the tracks in your library) in alphabetical order and go look for doubles manually. You delete everything except the library version of the tracks that were in your original playlist. After that you have a copy of your original playlist with library versions of the tracks only. After checking whether you have the same number of tracks and playtime as in your original playlist, you can delete that original playlist (with the non-library versions). I admit it: this is a ■■■■■■ and unworkable procedure. But maybe it sparks the creativity of someone smarter with better ideas.

Wow! I get the idea, but it’s very complicated, you’re right. And you’re really lucky because you haven’t hit Tidal’s 10,000 limit yet.

4 posts were split to a new topic: Can’t add all selected tracks to library

Hey @Alexander_Bashlaev – I wanted to clarify something here.

So, I was a bit unclear when I initially talked to Dylan about this. I intended to communicate this was something like a “known limitation” because shuffling of tags has only ever worked on content in your library.

This causes a long-standing issue when it comes to playlists, since the playlist itself is in your library but can contain content that’s not in your library, which our tag infrastructure doesn’t include when you shuffle the tag.

I agree this limitation is lame and that fixing isn’t really appropriate as a feature request – “make tags work on content outside my library” would be a fine request that would give you what you want, but it’s a reasonable request that Roon properly shuffle the things you’ve tagged.

We’re aware of that request (and some of the others mentioned in this thread) and considering changes for the future. That said, I don’t think this ever worked the way you’re describing. If I’m misunderstanding what “used to work” here, definitely let me know.

That said, I don’t think this ever worked the way you’re describing. If I’m misunderstanding what “used to work” here, definitely let me know.

Hi Mike,
Thanks for clarifying. But if I wasn’t sure of this, I wouldn’t write about it. The same tags with Tidal playlists shuffled without any problems when the Roon Radio UI was used for shuffling. And I was unpleasantly surprised, when since build 763 I couldn’t do this anymore.

They both move kind of quick but in the 1.7 one, the Melissa Etheridge album is from outside library (note the inactive fav hearts) and is never played during the shuffle.

In build 753, the album “Arrival” is outside library, and also never gets played during the tag shuffle.

I know you don’t have these builds at your disposal, but I’m not aware of any other distinctions that could have caused things to work the way you’re describing. If you think there’s something I’m missing about how the playlists were tagged, where they were created, how you were shuffling, etc, let me know.

Well, I’m confused. This is very, very strange. I was sure it used to work before. Maybe it’s some kind of memory aberration.

Thank you for your patience and these examples. I hope finally it will work some day.

This has been resolved in Build 831:

Roon 1.8: September 2021 Release [image] In our latest 1.8 release, we’re rolling out one of the Roon community’s most requested features: native control of Roon from your phone, even when the screen is locked. Alongside this, we’ve made it even easier to compare different versions of your favorite albums in Roon and expanded Roon’s exporting functionality. Instant control of Roon from your phone You can now access essential controls natively from your Android or iOS* device without going in…