As far as I know analysis has been completed, however, I find albums in my library that display a flatline rather than a waveform when played 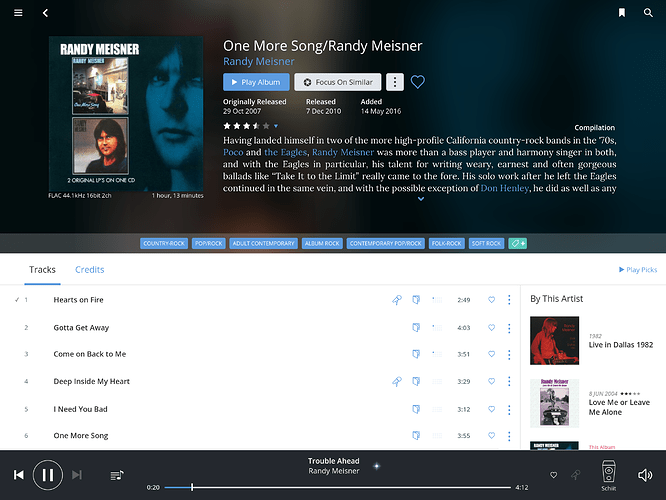 Same here. About 1 in 3 newly added albums comes up as a flatliner. Reanalyzing fixes things.

Seems to happen more with highres albums, but this is probably down to coincidence.

I just ran through a few flac imports from the last week, testing on Linux because I think that’s what you’re both using – correct?

I’m not seeing this on the few I ran through. Anything notable about them? What are you seeing in Settings for analysis?

Maybe you guys want to send @vova and I a file or two, so we can test with the same media?

Running Linux, as far as I can tell there’s nothing peculiar about the files. It’s been this way for a few builds now, I’d initially assumed there’s still some analysis going on, but settings shows otherwise. Will upload a few tracks. When you run reanalysis it’s well and truly instantaneous, like Roon realizes the album’s already been analyzed and hasn’t changed since.

@mike, @vova I’ve uploaded 2 files from same album and a 3rd from an unrelated album. None are high-res so I’m not sure bit depth/ sampling rate is part of the equation:
1-05 - I Need You Bad.flac
1-07 - Trouble Ahead.flac
16 - Trouble in Mind.flac

Running Linux on NUC. As with @evand, there appears to be nothing special about the files – and it seems to happen quite often since a few (2? 3?) weeks. Background and On-Demand analysis are both set to fast.

S[quote=“RBM, post:6, topic:12406”]
Background and On-Demand analysis are both set to fast.
[/quote]ditto re analysis speed.

As far as I know analysis has been completed

It would be worth double-checking if analysis is stuck, although the album in @evand’s screenshot was imported in May, so I’m guessing you haven’t been stuck this whole time.

I just tested the files you both sent and I’m getting a waveform for all of them, so just to confirm – when you guys are seeing this issue, what do you see in Settings > Setup under Analysis?

No activity at all. Adding a new album invokes activity and as soon as those new tracks are done we’re back to normal. As explained above, if you force re-analysis of a flatlined album the analysis is literally instantaneous i.e. it’s over as soon as you start the process and then the flatlining is a thing of the past. I’ve obviously no knowledge of the code but the re-analysis is so quick it feels to me like a checksum is recomputed and found not to have changed, the database is checked to see all analysis results are present and on the basis of the unchanged checksum Roon concludes nothing’s changed, no work to do…except it changes something, somewhere that now enables waveform display for the album/ tracks in question.

Ditto – analysis is finished (or at least no activity shown). Reanalyze shows waveform almost instantly, even on the playing track.

Still seeing this with a153.

Just reporting: still seeing this with 154/155 – if anything, it’s getting worse (almost every newly imported album is a flatliner now, waveform springing to life after manual re-analyze; background and on-demand analysis both set to ‘fast’).

Could be coincidental, but since I’ve set Background Analysis to ‘Normal’ a few days ago, all waveforms are present immediately after adding new albums again.

i got this ‘flatline problem’ with almost all new imports since i moved core to a new NUC and restored the database… Core is running on Windows 10 (64 bit LTSB). Reanalyze fixes it, but i have to do this manually now with almost all new albums…
Background Audio Analysis is set to ‘throttled’ and on-demand to fast.

i got this ‘flatline problem’ with almost all new imports since i moved core to a new NUC and restored the database… Core is running on Windows 10 (64 bit LTSB). Reanalyze fixes it, but i have to do this manually now with almost all new albums…Background Audio Analysis is set to ‘throttled’ and on-demand to fast.

Can you give us the full details of your system? We can try to reproduce and see if there’s a bug here.

I hope this info helps you finding something…

Thanks @Audiofi3l – can you tell me how you’re adding music to your watched folder? Are you copying it over straight to the watched folder? Is Roon watching the folder while the copy is happening? Are you editing or moving the media afterwards?

None of these should cause a problem, but having the details will help our QA team mimic your setup as closely as possible. Thanks!

I tag the files first and then copy them to the watched folder on the NAS. I have to say by the way, it seems the recently added files from yesterday and today looks like to be scanned correctly automatically…

I have to add, it seems the problem has fixed itself, probably by kicking Roon in the butt by manually re-analyze a lot of albums…

Thanks guys. We were able to reproduce. Ticket is in.