The stopping issue follows this exact pattern every time.
In “radio mode” after the album/track I was listening to ends.
As the current song is finishing it shows the next song about to play.
(“coming up in ## seconds”)
The predicted next song never plays.
(although it might extremely briefly flash in the “now playing” section)
Instead it skips to another song.
The song it skips to will consistently pause on the 2 or 3 second mark.

I have not found a consistency in bit rate or file type for the skipped songs.
It seems like it is more often it is a high bit rate song, but I seen it with low bit rate skipped as well.

There does seem to be some albums which have songs that get skipped more frequently, but I have not found that to be 100% either.

Complicated network. Sonicwall, several managed switches, Ruckus Wifi Access points
All Network Audio devices are wired to the network, a DAC is using USB from the Mac Mini, nothing is using the wifi for audio connectivity.

Thanks for reaching out here!

• How often would you say this occurs? Once a week? More/less?
Several times daily. If “radio mode” encounters an Unavaliable song, playback stops. It is highly repeatable.

Happens most times after the album/playlist I started with ends and Roon automatically continues in “radio mode”.

Within several songs in “radio mode” the song listed as playing next is “unavailable”. The unavailable song gets skipped, but the song after it plays for 1-3 seconds then playback stops.

It is repeatable with any unavailable songs that always get skipped.

• Does this issue occur on all your zones or just one/some of them?
The zone is unimportant

• Do you know if it is just streaming (TIDAL/Qobuz) content that displays this behavior or if local tracks do as well?
Local tracks only. I’m not using the streaming service currently.

• Can you note the exact local time + date in your country of when this behavior next occurs? E.g. 11:16PM on 6/3/19? This will be useful if we need to take a look at diagnostics later.
I have not written down the time yet, but I can do this soon.

QUESTION?
Is there a way to make a “smart playlist” of “unavailable” songs/albums.
The ones I have found were all available from their source, but Roon has “lost” access to them.

I would like to find a way to delete the unavailable versions and re-import the folders with the songs.

Thank you for providing that info. Can you please clarify on the following point?

Within several songs in “radio mode” the song listed as playing next is “unavailable”. The unavailable song gets skipped, but the song after it plays for 1-3 seconds then playback stops.

I am not certain why a track would show up as “unavailable” if you are not streaming content from TIDAL/Qobuz. Where are these files located, are they on a NAS, local hard drive or elsewhere? What is the file path to these unavailable tracks? You can find out this information by right clicking a track -> View File Info, and it should look something like this: 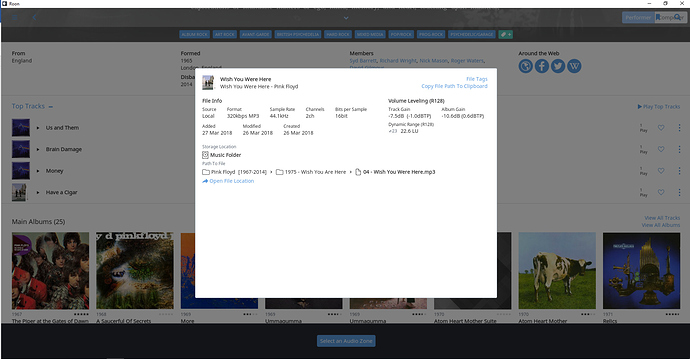 • Can you note the exact local time + date in your country of when this behavior next occurs? E.g. 11:16PM on 6/3/19? This will be useful if we need to take a look at diagnostics later.
I have not written down the time yet, but I can do this soon.

Can you please let me know this info when possible?

QUESTION?
Is there a way to make a “smart playlist” of “unavailable” songs/albums.

There is not, but it would best to clarify the above to figure out why these tracks show up as unavailable in the first place.

Can you please clarify how these unavailable tracks are showing up in your library? Since you are not using any streaming services, Roon Radio should be operating in local mode and select other tracks from your library.

Also, please let me know the exact local time (timestamp of the issue) when this behavior next occurs in case diagnostics will be of help down the line.

Ugh Norris,
In Roon Radio mode, music stops at 3 seconds into a new song, all music types and files in my library are on a HD in the Nucleus+. Also when I am streaming NPR, the audio eventually stops too. Roon used to play infinitum until I stopped it.
I have spent a lot of time and money on the Roon system I have bought your hardware and a lifetime membership. This did not used to happen. You keep asking for more details. Where is the repair or fix? This does not happen with other music clients. Do you have anything to improve this situation or can you refer me to someone else at your Co. who can help? Am I waiting for an update? I am frustrated at the lack of a solution. Kind regards, Ian

You keep asking for more details. Where is the repair or fix?

The best way that we can resolve issues here on Community is by asking for details and pinpointing the source of the issue. This process can sometimes be involved and requires verifying a few aspects, but we have found it to be the best way to troubleshoot behavior such as this.

Do you have anything to improve this situation or can you refer me to someone else at your Co. who can help? Am I waiting for an update?

I had previously asked you to let me know timestamps of when this issue occurs and this is our next step:

please let me know the exact local time (timestamp of the issue) when this behavior next occurs in case diagnostics will be of help down the line.

Can you let me know the exact local time + date in your country when this issue next occurs? E.g. 12:42PM on 7/29/19? Once I have timestamps I can go ahead and activate diagnostics mode and take a look to see if there are any clues as to why the track stops.

There was a stoppage again today. We noticed it at 13:36 PM (PST). Not sure how long before it stopped, but we were listening fairly actively, so the stoppage was probably not more than a few minutes prior.

It had the same characteristics as all previous stoppages. The song (Jackson Browne, Something Fine) was stopped at the 3 second mark.

Thanks for letting me know that timestamp, I have gone ahead and enabled diagnostics mode for your account and what this action will do is next time your Core is active, a set of logs will automatically be generated and uploaded to our servers for analysis and I can take a look to see if there are any additional clues as to this issue in the diagnostics.

Thanks for letting me know the new timestamp. I did see the previous logs come in but Roon was displaying quite a lot of traces, making it difficult to ascertain why the stoppage occured.

You previously mentioned that the zone was un-important, but I am seeing here that you are grouping what looks to be all of your zones at once. Troubleshooting in this way will be difficult since if it is just one zone that is causing the stoppages, we should try to identify it.

Can I please ask you - if you ungroup the zones and play to them individually overnight, do any of the specific zones stop while the others keep playing as expected?

All of my zones are stopping together. No Zone is operating independently no difference during play and/or the stoppages at the 3 seconds mark. All of the zones are Roon Ready. Either 2 Ayre DACs and 3 Blue Sound NODE 2i.

I can separate them and let them play separately and let you know.

I have each zone separately playing different music tracks. The Ayre CODEX and the “Music MIni System Output” are the same output so I am only playing the CODEX. Does this make sense to you?

I started this independent playing at 1:15 PM PDT USA

Bluesounsd are Power Node 2i

Thanks for separating the zones. If just one of them stop at the 2-3 second mark, please let me know the zone name and the exact local time in your country of the stoppage and I can check diagnostics afterwards for any additional clues.

23 hours and no stoppage at 3 secs yet, All zones played without problem. May I propose that, I start re-grouping by adding one zone at a time until the stoppage re-occurs?

Thanks for confirming. Yes, you can add one zone in at a time until we find the reason for the stoppages. I would also like to request some more information as to how these zones are setup, are they all connected via WiFi? Any of them on Ethernet? If on Ethernet, are they connected to the same switch?