I have replaced my Windows NUC with the Linux based SonicTransporter. Not really used it other than minimal testing, in the process of copying content over.

But similarly, it originally saw the SonicOrbiter and after a day or so lost it. The Orbiter has no network configuration changes and is plugged into an Eero, must be DHCP. But I don’t think it is a lease expiration issue in the Orbiter, it has worked with the Eero for weeks.

The SonicTransporter also doesn’t see the 818. I previously had it direct-wired to the NUC with static IP, now use a switch plugged into an Eero. Will try going back to DHCP.

Did I mention that networking sucks? The failure mode is crickets.

Using a wireless hot spots to route networking to your gear is often troublesome. Most of my support requests involve wifi extenders like your Eero.

In my experience “wireless network sucks”

I recommend HomePlug. Much more reliable and is most cases faster with lower latency.

Thank you for the offer, but I wouldn’t dream if it. You have your business to advance, and I want to see that succeed. My networking problems are mine. A discussion on the forum is one thing, but… And I have tried Homeplug, didn’t work well, probably because of ancient and convoluted wiring.

Yes, all networking sucks and wireless sucks absolutely. But in my experience, it is difficult to set up and brittle to changes, but once it works, modern wifi is fine for music. And I use it only for secondary locations, my main music room is wired.

In hindsight, considering the money and time I have spent over the years, I should have hired an electrician to network the house when I moved in 12 years ago. And fix power wiring at the same time, power sucks too. But I didn’t. I’m into self sufficiency, more inclined to write a big check and plug in a PSAudio power regenerator than hire a contractor. Some deep psychological flaw…

Networking sucks. In all its varieties.

@agillis All my problems are now solved.

The SonicTransporter and MicroRendu arrived, joined my SonicOrbiter and misc. Meridian gear. I had various problems but they were all caused by networking. Solved now, everything works perfectly.

And Andrew, the problems were not wifi, they were with the wired connections.

Works great. I haven’t done systematic sound quality testing, that will be a project for another day. Or maybe not, I’m very happy with it right now.

Great good to hear you have it working.

Anders, do you use both Transporter + Orbiter , why ?? they arenot same functions ?
or just one ?

The Transporter runs the Roon core, and in my setup also contains the music storage (2 TB SSD). The Orbiter is an endpoint: I have a SonicOrbiter SE in the bedroom, a MicroRendu for headphones. (Plus a few other endpoints.) You normally need both core and endpoint.

I understand with the current version of the Transporter software, you can drive a USB device directly – when I bought it that wasn’t possible, needed a network endpoint. I can’t testify to that, haven’t tried it. In that case you wouldn’t need an endpoint (Orbiter), unless you wanted music in several rooms.

Roon on Sonic Transporter stocks with getting data from NAS “Operation in progress” but nothing happens, see screenshots below. Also miss button “force rescan”. Server on my PC works with outs hiccups. Restarted ST, Roon Server, Roon App, nothing helped.

Please let me have some advice. 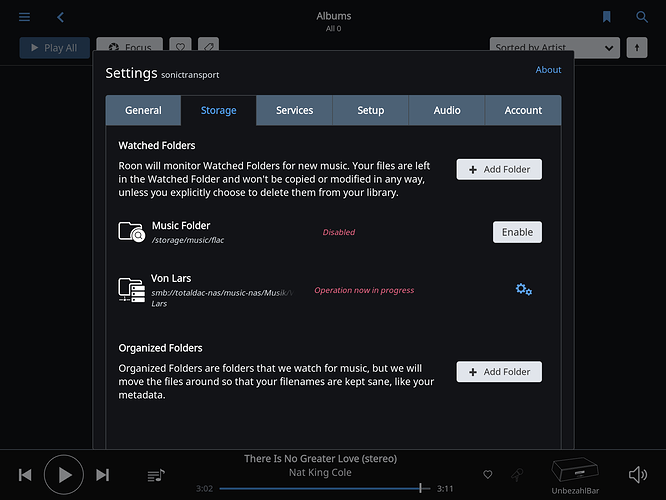 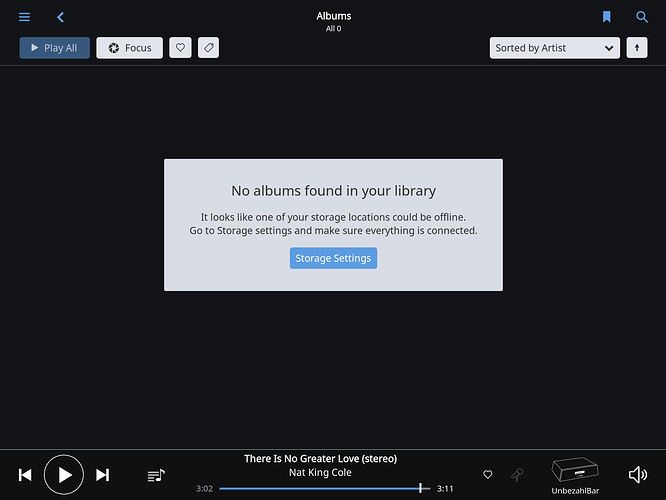 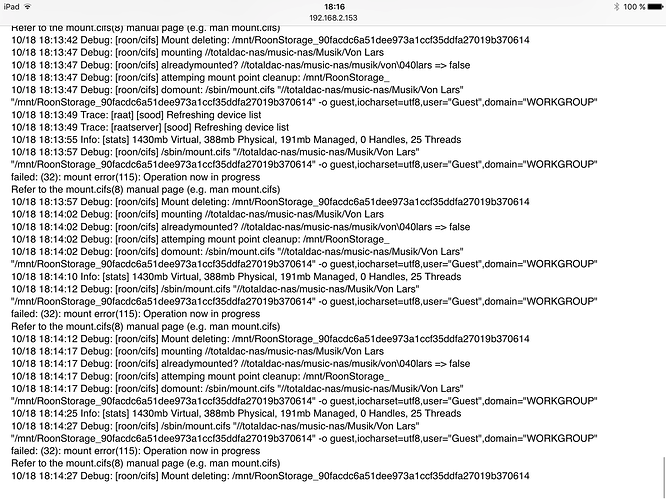 The logs are saying the mount has failed. This could happen for a lot of reasons. Your URL for the NAS could be wrong or you may have entered an incorrect username and password for the mount.

Roon support should be able to help you with this.

Nothing wrong with NAS URL and/or username/password. Also IP address instead of NAS name doesn’t help. Everything is unchanged and correct, Roon Server on PC has the same mounts and it works.

I know this can be frustrating but if the URL/user/passowrd is not perfect it won’t work. Maybe Roon support can help us. @kevin helped some other users here.

So this morning I installed Roon and had it import all the music files from my NAS. Approximately 25000-29000 tracks. All was good with the world So oddly enough just now I switch over to my Roon software (core) that has been running most of the day and I find it is again going through the process of copying/adding to the library, it seems like it started from scratch again ( cannot verify that ) and is currently up to 21047 tracks. I mount my NAS on my Mac desktop. I guess I will see if this…

@kevin any ideas one what else to try?

Guys I don’t know why but the router restarted itself and its working again now. It looked to me as an ST issues as everything else on the net including Roon Server on my PC worked well.

Sorry for bothering you and thanks for your replies.
IT sometimes is very foggy…

So, try this if you have a similar problem.

Nice find. Setting a reservation in your router is always the best way to keep the same IP address for a device. That way if you move the device to a new network it can get a new address.

I was hoping that reserving the IP in the router would make things work for me with my sonictransporter i5, but I think I have some other issue now. I first plugged it in to the router, got on sonicorbiter website and I saw it there.

Loading up Room on phone, I couldn’t see or add any audio devices visible that I used to have connected Elac Z3 speakers), so I disconnected Roon server, reconnected it several times and still no audio devices seen.

I rebooted sonictransporter i5 from within sonicrorbiter website and now the Sonic i-5 didn’t connect. No Sonicorbiter OS based music server found on your network.

Logging on the router as admin, I saw that it had been previously connected but now showed as a disconnected device. I tried different ethernet cables, different ports on the router, rebooting router checking for firewall issues, finally reserving IP based on the info here for the music server, rebooting everything and it still shows as offline device.

I’m going to have to bring it over somebody else’s house and plug in the router to see if the ethernet port on i-5 is still working or not. It shows blinking yellow on left side of ethernet plug, solid green on the right side. On the router side of the ethernet cable, it shows as blinking yellow. When I say blinking for either of those, they aren’t slow and steady, but a combination of fast and slow flashes.

If you are still having problems reach out to Small Green Computer support.

You can do that by clicking the contact us button on the Small Green Computer web site.

Thanks Andrew. You’ve been awesome with all previous questions.

Not a big fan of Comcast Xfinity, but everything looks good to me on the router.

Sadly, I drive back home tomorrow (10 hours drive) so may not have more time to try and connect at a family member’s house locally. If not, I’ve got to take it back home and figure it out.

Thanks for replying again so quickly!