NB, I made a mistake on the Sonos zones, I also have a Sonos Connect - details added above

This is a reopen of the previous thread, which was closed by @support.

The system had remained stable for a few days, after moving the Mac mini and connecting directly to the router but with out (as far as I can see) any changes has reverted to the previous behaviour.

Roon loses all of the Sonos endpoints. A reboot of Roon core several times then refunds them, until they all disappear again.

All the Sonos devices remain present and reachable in Sonos. All non Sonos end points remain reachable in Roon. The Sonos zones rarely stay connected for more than an hour now.

It seems this is an ongoing problem, @support could you please take a look? 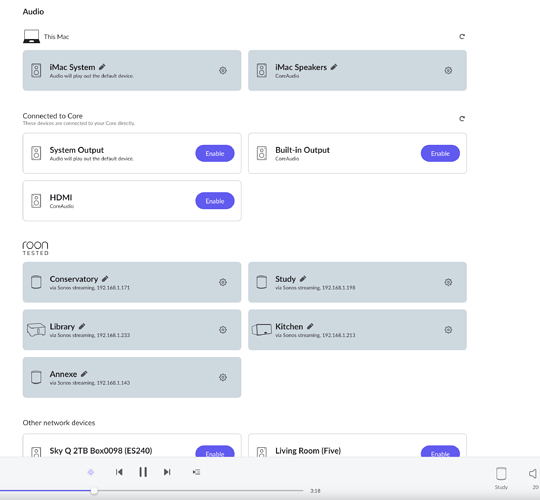 Martin sadly I have been experiencing exactly the same issues for the last couple of releases as well, along with a number of other user’s.

3 reboots a day for the last several weeks, after months of stable working. It started the day build 903 was released with the first restart required within 3 or 4 hour’s of the install. It has not gotten better with any subsequent release.

Like you my Sonos devices are always available through this downtime in the Sonos app and reappear within 2 minutes of restarting Roon.

I’m not using Sonos, but I have the same issue with a Chromecast group not always being available.

To expand on that, my individual Chromecast ultra is very consistently available, but the group of my Chromecast and Nest Display is not present in Roon very often.

Yes, it’s got worse. I think there was an update to Roon core, after which the Sonos zones disappear.

The fact that the Play 5 remains available via Airplay but not Sonos streaming seems to point to a Sonos issue at least on our networks.

The Sonos system uses the Wi-Fi network, not Sonos net. The network seems stable for all other purposes.

Martin I fully agree.
When it happened last year I think I had a Sonos update at the same time as the first beta came out, so could have well been something that they did at the time (similar to Apple breaking Airpod stereo playback in an update).

I just wish Roon would give more information on what has happened beyond that they cannot replicate it. Plenty of people have had this issue and complained here. I’m sure there are plenty of us that would run test code or have additional system debugging enabled (I already did this to no avail).

Any chance of a response from @support

It’s causing marital strife at the moment, I’ve set my wife up with Roon and created a profile, but then 4 times out 5 she opens the remote to play music all the Sonos zones have gone, so she reverts back to Sonos, which then begs the question, why have Roon.

I’ve had very little feedback from @support - someone pulled some logs a while ago but no follow up.

I hear you Martin and my wife has moved back to using Tidal instead of Roon for the same reason.
She is not happy with Roon and it is all my fault

@support is there a way to raise a ticket, or at least get a response on this? The issue is still very much there.

Actions I have taken:

Sonos works fine from any device using the Sonos app.

Airplay works fine from any IOS device, and from Roon.

The problem I see seems to relate to Roon and Sonos, and I see from other threads it goes back a long time, but I also see other supports tickets with Roon losing other audio devices.

I have had pretty much no response from Roon support, which is poor for software that costs over £100 per year.

Other things I have tried:

Hi @support like Martin I am getting very tired of this issue and looking to start rebuilding my Sonos system once again and do more testing.

I have turned several of my Sonos devices off which seems to confirm my suspicion that the Roon discovery is the area with the problem. In Sonos the devices disappeared within a minute or two. In Roon they are all still showing (see below) 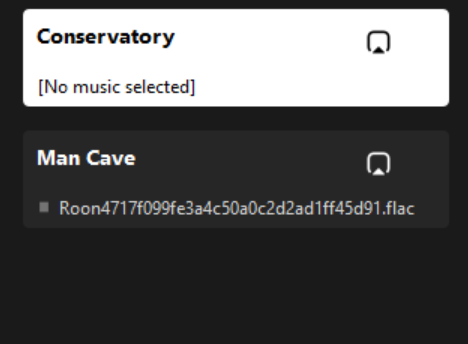 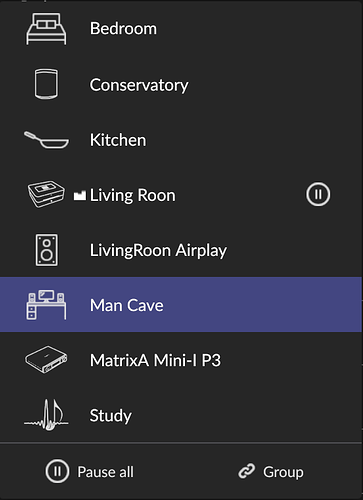 How often is the discovery process run and how does it keep track of the devices.

It really would be good to get some information from you, because this is really annoying and the silence only makes it more so. I am a life timer so I cannot cancel, and I really love Roon, but silence like this is what makes people quit Roon.

EDIT : About an hour later and all the turned off devices have disappeared.

Hi @Yaohan you chipped in an earlier thread, can you add anything if this is being ignored

Any news from @support on this? It’s getting embarrassing.

. We are making progress though, so all hope is not lost.

As far as your case goes, our technical team has performed an investigation and it looks like the discovery messages from your Roon Core are never making it to the Sonos zones.

If your Sonos is connected over WiFi, would you be able to at least temporarily try an Ethernet connection?

Thanks Beka. I have made some network changes, so I am going to see how the stability is now.

I am now facing a new issue, not seen before, however

As with the missing zones, the Sonos end point remains connected to the network and is always visible in Sonos.

@beka out of interest was anything changed n b923 ?
As for me it takes about twice as long to lose Sonos now.
It has gone from 3-4 hours to normally 7-10 hours, so really on two restarts in a day (when I wake up and when I get home from work). If any changes were made I wanted to say they might be working.

I did turn off my Sonos Move a day or so before b923 came out, but fairly sure that made no difference.

I’ve made some network changes @beka, so could you run the tests once more please?

However I’m getting frequent “Roon has lost control” errors, as well as music (from any source) simply not playing although Roon thinks it is playing.

The only solution is a reboot of the core.

Martin that’s interesting as previously I had lots of issues while connected to Ethernet and WiFi was the way to make it more reliable until build 903.
Maybe digging out my Boost and turning Sonosnet back on is called for.
Though I think I will wait to hear what the developments Beka spoke of were.

The Roon lost control was my most regular problem when I first had Roon and it might happen 10 to 15 times a day. Now it never happens but they all disappear twice a day…… choices

Just reporting here that, after my last network rebuild, which uncovered some IP conflict issues, I have had all of my Sonos endpoints up and running for about 3 days now with no “lost control of endpoint” errors.

As always, all of the other endpoints remain stable and I’ve just added another endpoint via a Pi with a HiFI Berry DAC over WiFi and that also seems to be OK, save a weak WiFi connection.

I have an IKEA Symfonisk (equivalent to Sonos) speaker on my network, in the children’s room. This is connected via WiFi and I have never had any problems.

Since build 923, my Nucleus very often loses the connection to the speaker, or it stops playing between queued songs, and it often does not respond to actions no matter what Roon remote. The solution is to reboot the core and restart Symfonisk, but it only takes a few minutes for the problem to reappear.
The speaker hangs particularly often when my daughter listens to audio books and the tracks are particularly short, sometimes only 30 seconds or similar.

Unfortunately, I find the network speaker very unreliable and no longer really useful.

Beka has said Roon are working on a fix for this so hopefully those of us that are afflicted have light at the end of the tunnel.
I understand that it is very frustrating but at least there now appears to be hope