I prefer to sort albums by the date they were recorded. When you get several releases of the same album, sometimes the original release date isn’t accurate. This is especially true with live recordings. The release date ends up being when the album was produced, which could be many years from its recorded date.

This would be a very useful feature. At the moment you can choose to sort by Release Date or Original Release Date. What I do at the moment is to manually set the original release date to be the same as the Recording Date. Involves a lot of manual editing of metadata.

Some albums don’t have recording date so what we really need is to be able to select a heirachy of dates.

My suggestion would be for an option to be added in settings - which would be sort by Recording Date if available and, if not, then Original Release Date.

I have to give this a huge bump. I have a lot of bootleg concerts (think of the corpus of Dylan and Grateful Dead concerts out there!) and the release dates cause them to show up well out of order. I’d very much like to be able to sort albums by recording date so I can experience the evolution of an artist, not the bootleg industry.

Similarly I listen to a lot of early blues and recording date would make it possible to highlight the evolution of styles between artists and their respective influences.

As it is, like Mike, I have to go in and hand edit the release dates. I’m reluctant to do that though as I’d rather keep the metadata accurate so that any future features that might hang on the release date aren’t broken by my edits.

I would like to see this also. Recording date is valuable attribute that doesn’t currently seem to be usable for navigating ones collection. Related: Focus on Date Recorded/Recording Start, End Date

Any chance of getting this feature? I’m re-listening to a lot of Miles Davis this week and with all the rereleases of his albums, it is impossible to view his output chronologically.

2 years pass and we still can’t sort by recording date. Talk about a slow pace of progress.

If not sort by Recording Date, perhaps Roon could get an option for a Custom Sort where we could create sorts based on any combination of meta data the we want.

When is this feature going to happen? It is 3 years since it was first asked for (12/2017). I cannot find this feature under editing? I have every live dead show that was recorded and reorganizing per your data with take months.

There are things Roon just doesn’t care or listen to their community about. This is one of them. A very simple to add feature improving their product tremendously. Another issue is with their Android app on a tablet. Have you ever tried to browse your Dead shows on an Android tablet? It hangs and stutters. Complete garbage. Roon said they were updating it years ago and still haven’t.

I have to give this a huge bump.

I’ve been taking my time organizing at the way I want. It’s time consuming. I got January and February finished finally and then with the update yesterday everything crashed and guess what, all of my edits are gone and now I get to start all over again!

To help sorting I’ve assigned Tags in Roon for each year. So if I want to listen to a show in 1974 I use that 1974 Tag then can browse without performance lag.

I’ve also been a JRiver user long before Roon came about. I don’t really listen to music in JRiver because Roon’s interface and integration with things like Qobuz, HQPlayer and audiophile server products are great. JRiver is fantastic for sorting by any attribute and tag editing. What’s great about JRiver’s tag editing is that it directly edits the metadata of the file itself, so changes you make are stored in the file, translate to any software used and don’t get lost if an upgrade occurs.

Those who are mastering shows and putting them out on etree or wherever are not very consistent with their naming conventions or metadata, whether they come from Miller, GEMS, or whoever.

Here’s what I do for my Dead library in JRiver to modify the metadata:

Like I said, JRiver is extremely powerful for making these kinds of changes super easy and fast. It changes the file metadata directly. Roon can’t touch this functionality, but Roon does other things well.

It’s been Roon policy for some time to never provide a timeline on resolving issues or adding features. They won’t even say if they are considering adding the proposed feature, or changing an existing one.

Now that the new release has been out for a bit, has anyone found a way to sort by recording date?

So far I have only seen it available under the Artist view, Discograhpy, Recordings view.

I’m finding an issue with the sort by date. But n settings I have it set to use the original recording date. Then within discography, have sort by date with my oldest first. But for The Cure, the sort is a little out of order. Gets most of it right but think might be using rereleased date instead. 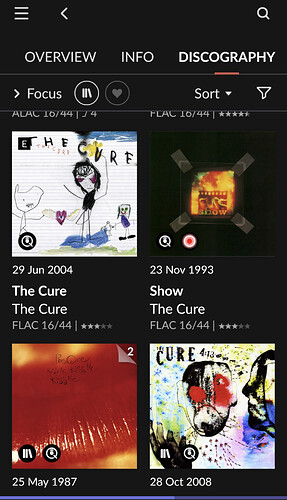 Seems to be a bug. I had already reported that a week ago or so:

There are quite a number of recordings where the exact recording date is not known resp. not documented. Or in other cases it is just not tagged / provided by the metadata source. In Roon 1.7, the following logic was applied when sorting Albums by Recording Date: When recording date is filled, use that, if not, use “Original Release Date”, if that is empty, use “Release date”. That was making a lot of sense as albums where meaningfully sorted with release date as approximation for recording …

Now roon will not pull up the shows by date. My metadata has been corrected and it says nothing. For example, I typed in 07-14 in the search and it says I have no shows from 07-14. It has been doing this for about a week now. I cannot find anything to correct this.