When I play music above 16bit/44.1 khz, it always downgrade to 16bit/44.1 khz. The music is stored on a NAS and amplfier is connected via cable. I use Roon via iPad.

Is this the way it should be? Or is it only possible to play the High res files when plugging in a digital player via USB? 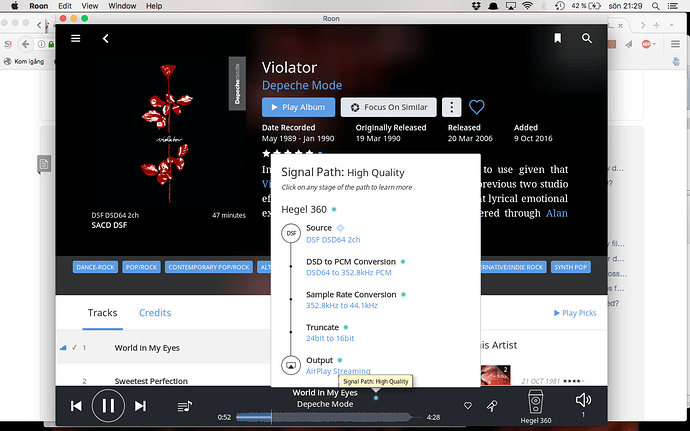 Thanks for any input on this

That’s my guess too. I thought that since it’s connected via cable it didn’t speak with the amp via Airplay. Foolish me

I thought that since it’s connected via cable it didn’t speak with the amp via Airplay. Foolish me

The odd thing is that when I use my Meridian network player connected with cable to the network and plugged to the amp via analogue input, i can then go via Roon/iPad and play higher that 16it/44.1khz?
It only convert to PCM.

But using the Hegel via cable to same network is not working? I find it hard do understand, 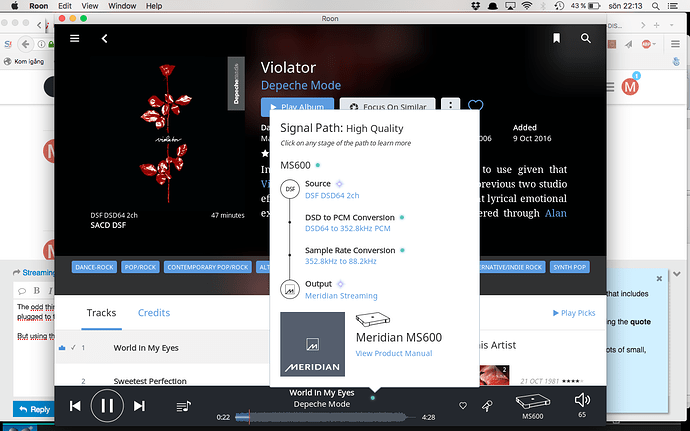 Everything with the Meridian looks correct.

Plugging in a Ethernet cable into the Hegel won’t work, because the Hegel isn’t a Roon Ready device. It would work if you connect your computer to the Hegel via USB.

If using USB from your computer directly into the Hegel isn’t possible, there are products available that use an Ethernet input and USB output.

Thanks Greg for the detailed input.

So basically I need either a network player like Meridian or similar, that apparently process the signal correctly even if it’s not connected with USB to the Hegel?

Or a device that are connected with Ethernet to the network and then using it’s USB into the Hegel?

How can Meridian connected to the network process the signal correctly and not Hegel? They’re using same network and both connected via cable? Or am I missing something here?

I will contact Hegel and see if I can get some input from them as well.

The reason is rather technical, so I don’t want to go into it too much (it’s past midnight here ;)). The network cable might be the same, but the way you use that network cable (“the communication protocol”) is different.

The Airplay protocol, designed by Apple, limits the usage of that network cable to stream music to a speed of 44.1Khz / 16bit. The Meridian protocol seems to support at least 88.2Khz. So while the cable is the same, the communication protocol imposes limits on the usage of that cable.

Gotcha Bart. I just needed to double check it

So Hegel is not the perfect match when using wireless then.

You have various options available to you.

If you go for another Meridian, because it has its own DAC, you won’t be able to take advantage of the DSD capabilities of the Hegel. However, you would be able to Group two Meridian Zones and play the same music to two areas of the house simultaneously.

You could use an extra computer as a Roon Ready endpoint, by installing Roon Bridge on it an connecting to via USB to the Hegel. There are other products that are Roon Ready, such as MicroRendu, Sonicorbiter or even a Raspberry Pi (if you’re handy with Linux). All will take Ethernet input and output USB to the Hegel and use the Hegel’s DAC.

Thanks Greg. Yes I’m with you.

But what about this solution? What if I install the Roon core on my Qnap NAS and connect a USB cable from that into the Hegel? What will happen then? Will it it work?

I don’t have experience with a NAS, so I’m going to ask @crieke if he has time to help out.

In the meantime, could you describe your setup, as it stands right now, as described here. Include the model of your NAS and where everything is currently located. This information will help in offering suggestions.

You can connect DACs directly to your QNAP, if you are running the RoonServer package on it.
I can’t say yet if this is a good idea, as I don’t know how capable your QNAP NAS is (Model? CPU?).

You could even install RoonServer package on your QNAP without setting it up after the installation. When RoonServer launches on the QNAP it will automatically launch the RAATServer. It will see your connected Hegel and it could be used by other RoonServers in your network as an output device.

Right now I run the core on my Macbook Pro. My thoughts is to install it on the Qnap TS-251.
My question is, if I do this, would the Hegel then accept quality better than 16bit/44khz? The Hegel is connected to the NAS with Ethernet. Or would better rates only work via a media/network player that accept higher rates? Or would the Hegel only accept higher rates via USB?

I hope you understand my questions

Let’s make it simple. Let’s leave the Meridian player out of the picture. So the set up is as follows:

So my question is. How to make the Hegel to accept better rates than 16bit/44.1khz? Is it only gonna work with USB?

My idea (if it’s advisable) is to install the core on the NAS (Qnap TS-251) and use the NAS as media library as well. Would the Hegel then accept higher rates via the Ethernet? Or would it still handle it via Airplay like it does now where as Roon is installed on my Macbook Pro?

So my question is. How to make the Hegel to accept better rates than 16bit/44.1khz?

As @Greg has already detailed. You can either plug the Hegel in directly with a USB cord from your computer, or get a MicroRendu, or SonicOrbiter SE, which will take the Ethernet cable and convert it to USB plug and plug that into the Hegel’s USB port.

Would the Hegel then accept higher rates via the Ethernet?

No it will not. For the Hegel’s Ethernet port to work as you want, the Hegel must have Roon code running inside the Hegel. Contact Hegel and see if they are planning an update for that unit.

Is it only gonna work with USB?

Yes, for now, only with USB.

It’s a jungle out there for a newbie like me with all these different options.
So let say Hegel won’t upgrade. Could another solution be that having a PS Audio Direct Stream http://www.psaudio.com/directstream-dac/ or any similar product? Or is this overkill?

Sorry for all the questions, just trying to understand the whole process 100% and making the best decision.