Suddenly disappearing endpoints: Is network the most likely cause?

[I spent a fair amount of time searching Community for relevant threads, but didn’t find ones that seemed to match well with my situation. Sorry if I missed them.]

Yesterday, the problem resolved after a third or fourth re-start of the Acer. Today, three-four restarts did not fix the problem, but disconnecting the Acer from wifi and then re-connecting did. But then, when I re-started Roon right after that (just to see what would happen), endpoints disappeared again. Rebooting modem and Orbi did not solve problems.

I would have attributed this to there being some jankiness in my internet service in the last two days, although there weren’t really indications of internet issues on any other devices in the house or via speedtest. But two things make me think that internet issues could NOT be the explanation. These are:

Both of these points are illustrated in the screenshot below, in which Settings>Audio shows all endpoints, but Roon says “No Audio Devices Found” – not even the physically present endpoints are found. 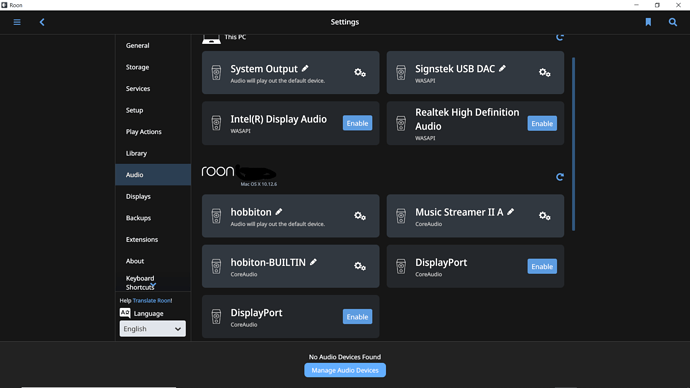 So my question is: Could it in fact be a networking issue even though: (a) physically connected endpoints are disappearing, and (b) Roon can still in Settings>Audio “manage” endpoints, including remote endpoints (4) and (5), even though it can’t find them to play to?

Thanks in advance for any input!

Thanks, @wizardofoz – I had been generally aware of this, but as I wasn’t having problems via wifi, I didn’t feel I needed wired. I saw it again yesterday when I searched Community before posting. I have now started doing that (wired) – will see how it goes.

But I still would be interested in input on whether physically connected endpoints could disappear and whether the ability to “manage” remote endpoints could still be available, if it’s purely a network issue… @support would you have any thoughts on this?

Hello @otinkyad, this is likely a network issue but we’re happy to help take a look! Let me know if the issue returns while your core is wired.

Hello @nuwriy – thanks for responding. Interesting to hear that this could be a network issue even though physically connected endpoints are also disappearing. In that case, I’ll wait to see how things go with the now-wired connection, before asking you to spend any time on troubleshooting – thanks –

Hello @nuwriy – many thanks for checking in. I was waiting a bit to reply because I haven’t had a whole lot of opportunity to test. But to the extent that I have used Roon in the last few days, it has seemed to work fine (now using a wired connection at all times). So, hopefully, that has taken care of it. But I will contact you again for help, if that’s OK, if I encounter those issues again – thanks!