I read recently on a poll, albeit slightly steered by the nature of the question asking ‘which gives better sound?’ A $1k hifi system in a treated room or a $10k hifi in an untreated room, which could be a good room layout. Nearly 10k people took part and 80% said the former.

Is this really true? What about the efforts that go into amps to reduce distortion and deal favourably with damping factor and slew rate. What about DACs and jitter. The list is endless.

But somehow then the room messes that up, regardless. Is this really a credible line of argument from our practical experience?

Yes, I saw it and thought the same regarding the framing of the question

While I’m a believer in the room as a major influence on SQ, I’d have position of speakers and seating far higher than treatment; the latter being finesse rather than fix - in order to ‘manage’ the room

He’s finally latched onto subs, and supports the idea that physically separating bass from mid/top is beneficial, again, this is position having greatest influence

But somehow then the room messes that up, regardless. Is this really a credible line of argument from our practical experience?

Absolutely credible. And logical. Room/acoustic anomalies (+/- 20 dB) are many orders of magnitude greater than even the most egregious electronic factors (-30 dB).

… sorry, more to your point

All things being equal

However, you could compromise an expensive system to be worse than a cheap one, or vice versa, by bad positioning

in the case of bad positioning, room treatments will not fix the problems, maybe lessen them

The speakers and their interaction in the room is the single biggest factor in any setup. Placement helps enormously but can’t help with SBR fully or stop first and secondary reflections you can minimise them but not fully mitigate them. Some may actually prefer the interactions that the room adds and some do not. Speakers should be chosen on how well they work with your kit but more importantly at home in your room and not on price or reviews etc. I made this mistake once and never again. My room doesn’t work well with coaxial speakers at all of any kind, they just end up being overly bright.

Yes but the quality of sound doesn’t just come from the frequency response curve and how flat or otherwise it is. Psycho-acoustics and brain interpretation come in too. Things like transient response and lots of the immeasurables.

But even with big anomalies in the frequency response by the room, what of the direct sound in the mix. This is an interesting article talking about critical distance - the point where direct sound balances reverberated sound. That’s gonna depend on listening level. So what then of that point that the 1000 hifi still sounds better and issues around frequency response.

Sometimes I think we can take the theoretical line in hifi based on technicals but the common sense line - equally valid. 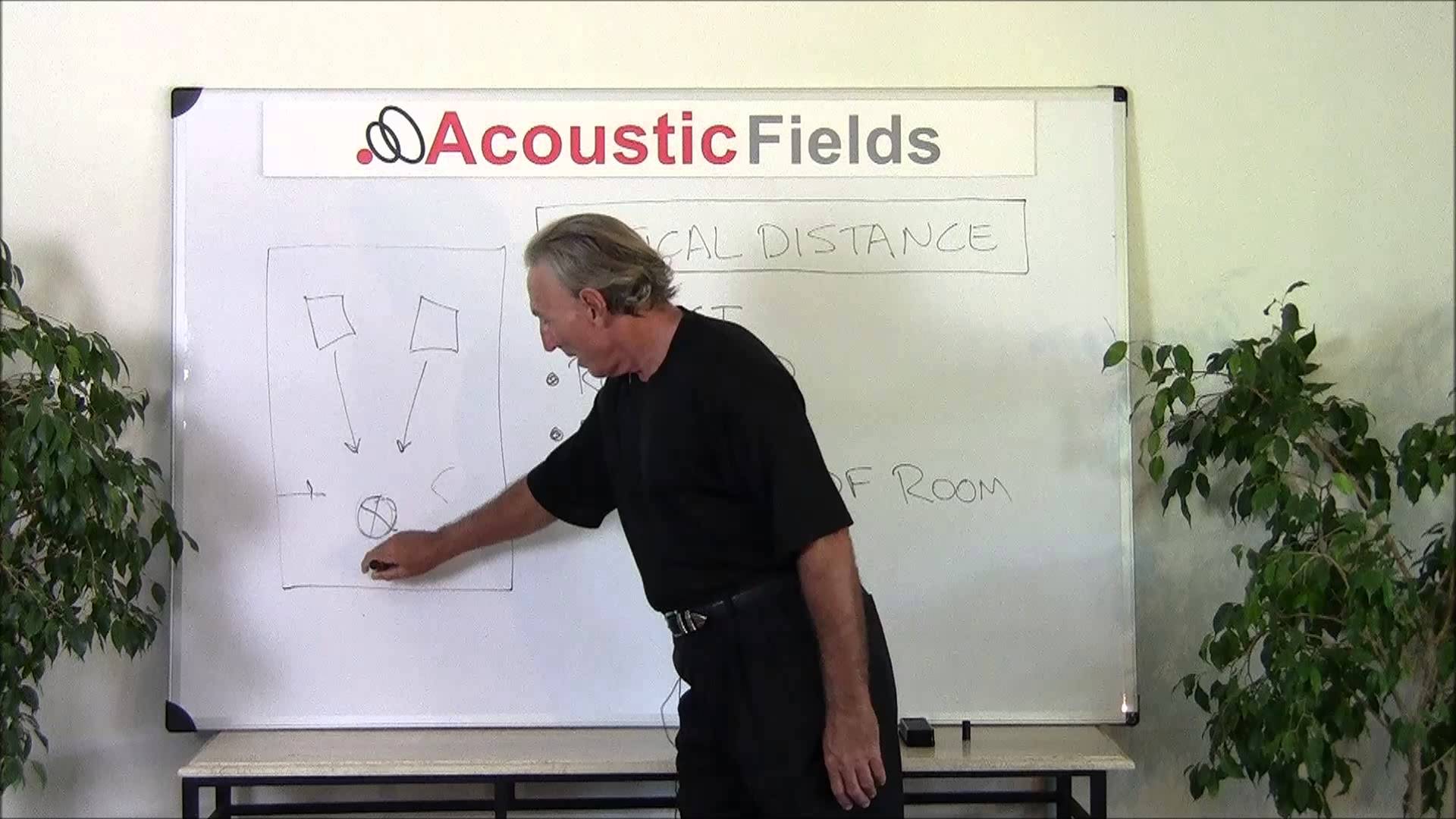 What Is Critical Distance And Why Is It So Important To Your Audio Experience?...

Critical distance is particular about which place in your listening room, home theater, or professional recording studio it will live.

If you sit close to the speakers, then yes, the 10k system ought to be able to resolve more detail etc

But anecdotally, people don’t want/like that - otherwise we’d all do it

I guess, similarly, we’d all agree* headphones can provide far more information than speakers at the same or lower cost - but (wild assumption here…) there are more HiFi systems than HeadFi^? (I know there’s been an explosion in the latter in the last 10 years - and I’m a big fan)

My point being, and we see lots of photo’ evidence of this, speakers are plonked into the living space practically and aesthetically - not for best SQ. listening positions are similarly derived (often for the TV)

Hence, if you have the opportunity (and urge) to position your self/speakers correctly, you can achieve a far better overall sound from your system - and we arrive back at the cheaper system potentially out-performing the more expensive one

^ I don’t include phones/earbuds in HeadFi

I would like to share the journey I took with my system setup since I dealt with similar issues. Amp/preamp I owned for over 20 yrs, source and speakers for about 10 yrs. We moved 2 yrs ago to this house and I got stuck with a dining room for audio, relatively small for the speakers, irregular walls, windows, open back. Sound became dull, boring and fatiguing so I turned to listening on my headphones. Circumstances forced us to stay at home in 2022, so I decided to fix the audio room. My first step as I had learned in last 30 yrs, was to get clean power: 20 amp dedicated lines, one line just for amps, the rest into a power plant into another line, replaced power cables. Good improvement, but it was not resolving. I borrowed my wife collection of canvas and placed them in critical areas, added curtains, still no good, so I removed them and the sound collapsed, so I decided on fixing room acoustics professionally. I installed all the panels, bass traps/diffusers etc, and the improvement was remarkable, better than I’ve ever heard. However, I had to go back to an older set of speakers because the newer ones I was using couldn’t disappear in the room no matter where I positioned them. The clean power, room acoustic, speakers were the key elements in taking the system to another level I had never heard before. Also, I removed all rubber feet from equipment, put them on metal platforms with high quality brass audio points, and separated power supplies from their equipment. Really, the results were astonishing, the energy in the room brought the music back and here I’m just listening to my old system with such joy. I hope this long story saves you the trouble with your system.

I recently acquired a set of speakers that are exceptionally accurate and direct. I’ll be moving in a few months, so for the time being have skipped any room treatment, opting instead for room correction via REW.

The process is based on first measuring a sweep up the frequency spectrum from 0 Hz to 24,000 kHz. What I found most astonishing was the variation I heard with my own ears as what should be an equal-level tone passed through all the various room-induced peaks and dips on its way up the sweep. Some movement of the speakers (and adjustment of the speakers’ own onboard DSP room integration settings) helped a few things, but it was crystal clear that the room was adding an enormous amount of “color” to the sound.

Not having tried it yet, I can’t say from experience, but I feel confident that physical room treatment would address at least some of what was going on in my in-room response. And given the magnitude of the perceived (and measured) room issues, I’m sure it would make a very noticeable improvement. I’ll definitely be measuring and physically treating my new listening room in a few months.

What I learned for my system(s) in my room(s) is:
Position is the most important issue (speakers and seating)
Bass speakers should be in the front corners (active or passive) either as the main bass source or augmenting full range speakers
Room correction is best for bass management (and optimises the bass from the corners)
Seating position is most important for perceived bass (you cannot fix a destructive null - but you don’t have to sit in it

)
Treatment should be used cautiously, it’s very easy to over do it - add/remove/reposition/remove - redo your room correction each time to hear what’s happening

My room is now quite bare - bar some diffusers on the front wall . No ‘first reflection’ treatment
I run my Quads full range, with the Lyngdorf W210 bass speakers steeply rolled off at 70hz
It sounds fine with no room correction, but gets an extra 10% with it (made up number, how do you quantify

Bass speakers should be in the front corners (active or passive) …

I second most of what you’re saying, but that’s the worst advice you could possibly give.
Distributing subs with differing dimensioning away from corners, while confirming with measurements, is the pro technique to even out their response over a maximized listening window.

You easily get away with that due to using dipole transducers with a figure 8 radiation pattern, almost creating a null in their panel plane, thus being rather directional.
I know about your Quads’ use of delayed radiation rings in the main panel in order to mitigate that, but still…

“What I learned for my system(s) in my room(s)”

I’m sure there’s a better way, but even though I could have multiple subs in my room, like for most there’s a cost issue. I can’t afford it!

As an aside, PS Paul recently spoke and hinted about seat-firing subs being great - I can attest to that (to a certain extent) as I have seat shakers in my sofa - stand up - and the perceived bass is gone

but that’s for AV

I do, and have for a long time, subscribe to good bass giving more than just bass

A long time ago I had the Celestion SL600/6000 system, the dipole bass speakers that were extremely tricky to get right (position, angle crossover and level) but when correct were excellent - I think of it now as ‘mechanical’ room correction

TacT came along with early DSP (I’ve still got the 2.2x) meaning you could, and in their view, should corner load bass and correct the inherent problems with electronics - their key point was using the corner as a horn, like Klipsch from the 30s (?) for impulse and avoiding reflections. The W210 bass speakers are designed to cross over at 400 to 3000 Hz

Steinway/Lyngdorf still do this. REL (I have an S3 SHO for my KEF LS50Ws) tell their buyers to put their subs in the corners and integrate them with space, angle, crossover and volume

A bit of a recurring theme that works for me

“What I learned for my system(s) in my room(s)”

Point given, and I apologize for raising my comment, but your statement

Bass speakers should be in the front corners (active or passive)

read so very generalized, that it got my fingers twitching…

Floyd E. Toole has a complete chapter about subwoofers in his famous book, scientifically worked out, measured and documented, wherein he concludes otherwise.

But hey, if it works for you and many others, who am I to try and teach otherwise.

I stay away from subwoofers and make do with a low end drop off below 30Hz due to integration complications, as well as marital and neighborhood peace.