The topic is "I'm a lousy computer operator"

Hi everyone,
I’m not sure the exact sequence of events but Roon isn’t working so well anymore for me. After the recent update I thought everything was cool.
The sound may have gotten cleaned up a tad too but maybe not.
I listen thru Jriver too and thought My gosh I wish Roon would make their software sound as good as JRiver at least or better if they could.
Instead of waiting forever, I decided to buy a programe called JPLAY. I got Roon running with it and seemed like it was OK but. Everything is off now. double images, very poor response from commands, freezes and shuts down now lots. I was just bragging about how Roon never crashed. MY bad. ALL programs crash man.

So due to my horrible computer skills and the fact I have ADHD super bad I can’t focus well enough to reminder a whole lot of commands or where this and that are so on.

Sifting thru a forum for some sort of answer to my issues is like asking me to fly an airliner with no experience and you all are on board. Don’t make me, we’ll crash. Just like my computer is doing. Roon just isn’t liking whatever I went and did messing with this and that.
Please Please help. I’m a lifer with Roon and love most everything about Roon too but man I’m stuck in muck now and I ain’t going anywhere I can tell you that.

Oh btw, I actually meant for my request for help to be a little constructive, convey my needs but overall honest. My hope is it’s not taken as insulting in any way or winey me going on about sound quality. So I’m hoping a bunch of geeky computer wiz folk don’t slam me for sounding stupid because I’m not, I’m fairly humble in fact and totally not used to writing anything in some forum like this. It seems extremely odd to me anyway and it does seem like a huge waste of time too. Who the heck will read all I wrote and say OK, that guy reached out because he feels he finally needs some help. NO problem. Well that’s all I’m really asking for here is for some help. My writing skills are as poor as my computer skills, can’t you tell.

The reason anyone is here at all is because we love music. Everyone here wants users to enjoy music through Roon, no matter what their level of computer skill. Everyone on the forum will be trying to help you. So that’s a good start.

I’m not on the staff of Roon, I’m just a user like you, but I volunteer to do things on the forum. In this case I’m going to ask the staff support developers to drop in and help sort things out. They are @mike and @vova and that @ symbol is going to flag this post so that they notice it. They’d probably notice it anyway but it makes me look like I’m doing something useful if I flag them.

One of the things that will help them understand any issue is if you can provide details about your system. If not, don’t fret, they’ll ask questions to find out what they need to know, but providing those details could speed things up.

I’m pretty sure this can be sorted out by uninstalling JPLAY and getting you back to a state where everything worked, but there’s nothing like hearing from people who know, rather than people who are guessing, so I’ll leave it to them to fix you up.

Thanks for taking the time to write me back. Also thanks for the tempered respond. Honestly I thought either no one would respond or I’d get a tongue lashing of some sort for not being cool enough or intellectual enough or calm enough or something or rather. However your the second sincere person who responded in a constructive and sincere way that is opening my eyes to what kind of people may be in the Roon community. That they are/you are not going to rip my throat out for acting out a tad or admitting I’m a computer idiot/moron like I am. It may sound like I’m being hard on myself and maybe I am however I’m am quite bad at computers because I’ve never used them on any kind of constant basis at all. It’s simply not something I do or care to do frankly most of the time and often times I glad. Then again like anything I wish I were better at it just so I could be more independent like I normally am at nearly everything imaginable but computers. I’m a better hardware techie then I’ll ever be software if that’s an upbeat thought anyway.
I did uninstall JPLAY and am wondering why those boneheads at JPLAY said oh yeah it works great and you’ll get great sound, better then …Anyway the fine folks you reached out too responded kindly I do believe and took control of things and seems they updated my Roon for me and probably reset things. Lord knows I tried. ADHD and computers don’t mesh and that’s no joke. Kinda like my writing, all over the place.
So thanks again and know this, the only reason I’m here is because I love music. I too want users to enjoy music through Roon but only you and another person who contacted me thru email so’s not to ruffle feathers calling JPLAY out as the culprit. As for me, I’m not intending on ruffling anyones feathers but JPLAY’s. JPLAY twisted up not only Roon but my other music software. I do want to add that even though JPLAY appears the culprit there may be other things going on in my operating system that don’t align as they should. It’s hard I’m sure for every rendition of Windows to be addressed and is probably the case here. Just wish I’d learned this an easier way so I could get my foot dislodged from my mouth more gracefully:)

Thanks Again and Happy Listening
John

Then in the box that pops up type in cmd

That brings up the command line interface

thanks for the tip. I did what you said and it checked out.

however the radio doesn’t play anymore when the box is checked YES after music is done which is disappointing.

as well Roon just isn’t working like it was the first week or two when I got it.

Then I switch to a PC and thats when the relationships and the seemingly intuitive character of Roon stopped. like making suggestions of what to listen to based on what I was listening to etc.

So you have Radio set to play when the queue finishes, but it’s not starting? Can you post a screenshot of the queue?

Let me know a few more details and we’ll figure out what’s going on here @John_Tann!

As for details what kind of details? And you say a the query? Does something about the query make the radio say OK I’ll play.

before the radio just played and I listen to all kinds of music from my own hi res stuff to ripped cd’s to Tidal academy award playlists to you name it. Old blues stuff, old jazz stuff, rock, folk, fusion. etc.

Hey @John_Tann – if you click at the bottom of Roon, you’ll end up on the queue page. It looks like this: 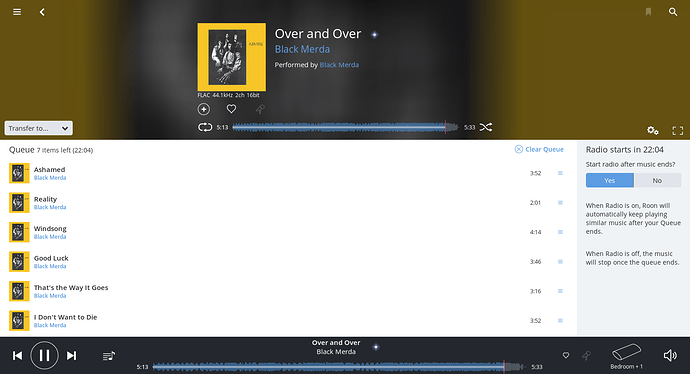 If you see on the right side, theres a switch that says Start Radio After Music Ends? – make sure that says Yes, and I think you should be in good shape, but let @vova and I know if not, ok?

Will do. If I were to bet I somehow switched it off and don’t realize its off despite probably looking straight at it.

I feel sorta blind looking at a flat screen but I’ll learn hopefully the more I do it.

Using a computer more is something I should be doing more too.