Tidal Collection and Roon not synchronised

A new album came out a couple of days ago on Tidal: Begin Again (Remixed) by Ben Bohmer. I can see it in Tidal, and I can add it to my collection in Tidal.

I’ve tried removing and re-adding it in Tidal - no luck. I’ve tried logging in and out of Tidal on Roon. And I’ve tried waiting - I know the synchronisation takes a while sometimes.

Albums I add in Roon do end up in my favourites in Tidal: that seems to work.

Any ideas what this might be? I saw someone else recently had a problem with Tidal and Roon not being synchronised: wondering if this might be more than a one-off. 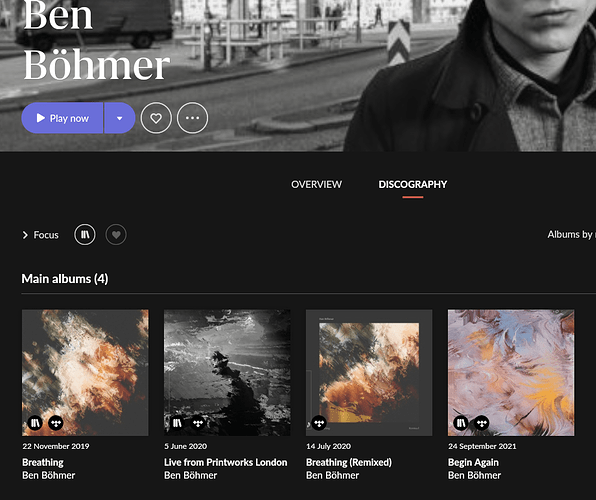 I’m having the same issues with Tidal. I followed the same troubleshooting steps, to no avail.

It seems like the most recent releases, since the 15th or so, are not visible in Roon.

Sometimes it can take several days for new releases to appear.

As Rugby said it can take time to catch up.
I often favourite new album’s in Tidal and they will often show up in Roon if I synchronise the Library in the Tidal section of Roon.
It’s worth giving that a go.

No I favourited this album in Tidal 4 days ago. I know it can take a few hours to sync after adding, I’ve had that before, but it never takes 4 days.

I tried the sync in the Tidal config on Roon as well. No joy.

Fair enough in that case, it could be a bug or is it an issue with that album only?

It’s not something I have seen recently. I add most of my day one albums in Tidal while in work and they are showing in Roon when I get home

Roon get updates to their database every few days from Qobuz or Tidal so can be behind as Roon hosts its own version of both their databases to make it work as Roon does, likely it dropped after one of these so won’t show up until the next one. There is usually another one at the tail of the weekend, sometimes though some do not come through. @joel might be able to shed some light.

I’m not sure that’s the problem here though. In the past when a new release appears on Tidal, you’re right there would be a delay. Never multiple days, but yes possibly it wouldn’t appear for a couple of hours.

However, even if you couldn’t search for it and find it in Roon, you would be able to speed up the process by adding it as a favourite in Tidal and it would appear in Roon. That behaviour is fairly well documented in the forums.

You can no longer do that. And it’s not just confined to the album I mentioned above either - the new Drake album came out yesterday, same issue.

Perhaps this is twofold. Perhaps there is a new dependency between the album being picked up by Roon after it’s added to Tidal favourites and Roon having their metadata updated.

Either way I don’t ever remember the delay in Roon getting new metadata being a few days. If it is that now, then that’s significantly worse than it used to be.

Yep, this was an issue and not just the usual short Tidal delay. It’s fixed now, details in this thread:

Hey everybody, the backfill metadata are now live on the Roon metadata servers. The Foals and Dire Straits albums are there. We also saw a larger than normal daily jump in the number of albums added by TIDAL, so other missing stuff is probably there too. Please let us know if it’s not. Final point: at the moment, these new albums are not yet indexed for search (should happen at some point later today, but I can’t say exactly when). Your best bet – for now – is to favourite the album(s) in o…